Opinion: Planned G20 protests will have little effect in Hamburg | Germany| News and in-depth reporting from Berlin and beyond | DW | 06.07.2017

Opinion: Planned G20 protests will have little effect in Hamburg

For weeks, chatter about the demonstrations accompanying the G20 summit in Hamburg has approached hysteria. But the summit is not a good target for those who actually want to achieve something, says DW's Bernd Riegert. 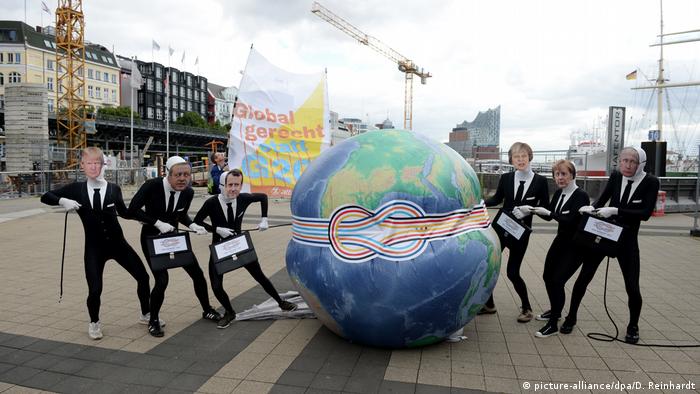 The far-left groups among the demonstrators at the G20 summit in Hamburg that starts in earnest on Friday are seeking a global revolution and an end to the capitalist system. They won’t achieve either goal in Hamburg. Even the more general protests against globalization are about as sensible as protesting against the passage of time. As long as the demonstrations remain peaceful, they'll likely observe the rituals we have come to recognize at any such summit held in a democratic country. The planned protests are nothing more than political cabaret.

Specific demonstrations - for instance against specific human rights violations in China, Russia, Turkey or Saudi Arabia - would make much more sense. Protests against the trade policies and the inept neo-nationalism being propagated by the loutish Donald Trump would be on point as well. What doesn't fit is this generic resistance to Germany’s free political system that permits such public demonstrations in the first place.

Violence should not be a tool of political discourse, and it’s only right that the police have promised zero tolerance here. This is not about providing a showcase to mob-style protesters who, a little like football hooligans, are just spoiling for a fight with authorities. Yes, there have no doubt been exaggerated concerns on both sides in the run up to the summit. What’s clear is that G20 opponents are being granted the freedom of assembly. German law doesn't guarantee the right to overnight camps for protesters, by the way.

Summit in the city, not the sticks

Those critics who say that such global political summit should not be allowed in a city where leftist radicals dominate entire city neighborhoods are wrong. The right of assembly in Hamburg also applies to representatives of the 19 countries plus the EU. And of course they should be able to meet and consult with one another, even if there are few concrete results.

The massive police presence is necessary to protect summit participants, but primarily to maintain some sort of order among the demonstrations. The more protests that are planned, the bigger demands on the security services. And the greater the announced police presence, the larger the protests. Despite this, it must remain possible for a German city to play host to such an event. Decisions to move the summits to more remote areas like Heiligendamm (2007) or Elmau (2014) have also been criticized. There, so the story went, the powerful had shuttered themselves in and the demonstrations were not able to make their voices heard.

Welcome to the next Trump show

The discussion quickly turns to whether such summits are even necessary. That answer's easy: yes. The most important world leaders have to be able to talk to each other. Silence can breed misunderstandings. A face-to-face meeting can often do more than many papers and studies. In Hamburg, the rather inexperienced US President Donald Trump will meet the far more experienced Russian President Vladimir Putin, and that will the summit's most important moment by far. If these two men don’t get on, it can only have negative consequences for Europe and the rest of the world.

And the world is also waiting to hear more about Trump's approach to global trade and the crisis surrounding North Korea. Hamburg is going to be the Trump show, and the topics for which the G20 was created - how to avoid financial crises and keep the global economy growing - will take a back seat. Climate protection, trade, migration? The message from Hamburg will most likely be Trump against the rest of the world. That's sad enough. We don’t need images of violent demonstrations to boot.

You can leave your comments below. The thread will remain open for 24 hours after publication.