The ongoing trial against German-Turkish journalist Deniz Yücel highlights the dysfunctional state of Turkey's judicial system. Once a hostage, he is now free and back in Germany. But other journalists aren't so lucky. 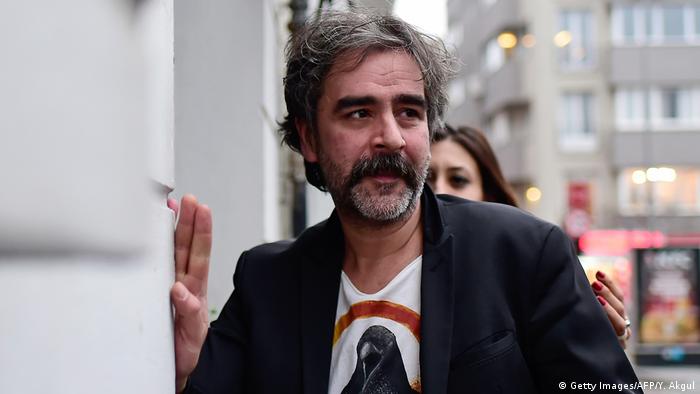 German-Turkish journalist Deniz Yücel may be free in Germany, but he is still on trial in Turkey.

The first trial hearing in absentia of the Die Welt correspondent on June 28 laid bare the politicized and dysfunctional Turkish judiciary.

It's a world where critical voices and the media are terrorized, intimidated, muzzled and criminalized. More than 200 journalists are locked away in prisons or awaiting trial, based on trumped up terrorism-related charges, shoddy investigations and fraudulent and circumstantial "evidence," according to critics.

Read more: Yücel on trial: A timeline of his year spent in Erdogan's prisons

The roundup of journalists and shuttering of media outlets has led to reporting fatigue on the issue in the Western media, helped along in part by the Byzantine complexity of the Turkish legal system.

Yet the case of the scruffy bearded foreign correspondent drew massive attention in Germany, mobilizing the public, media and top officials to rally to his cause. The perceived political hostage taking represented a jab by the large arm of the Turkish state into German press freedom — and nobody was going to have it.

Read more: Germany and the long arm of Turkey's AKP

At times, the state of German-Turkish relations seemed to hinge on Yücel's release from prison. In some ways that made Yücel lucky compared to his colleagues in Turkey, who lack the same diplomatic backing and have become another helpless statistic.

After his arrest in 2017, Yücel was held without a formal indictment being filed until this February. He was released from pretrial detention after a year in prison, 10 months of which were spent in solitary confinement.

He returned to Germany immediately after his release, which was widely viewed as the result of high-level political horse-trading.

Yet the German-born journalist continues to face charges of "engaging in terrorist propaganda" and "inciting the public to enmity and hatred" for his reporting.

Yücel faces up to 18 years in prison if convicted in absentia. He will testify at the next hearing in December via video link after an Istanbul court refused to drop the case on Thursday.

Read more:  Freedom of the press in Turkey: A slippery slope 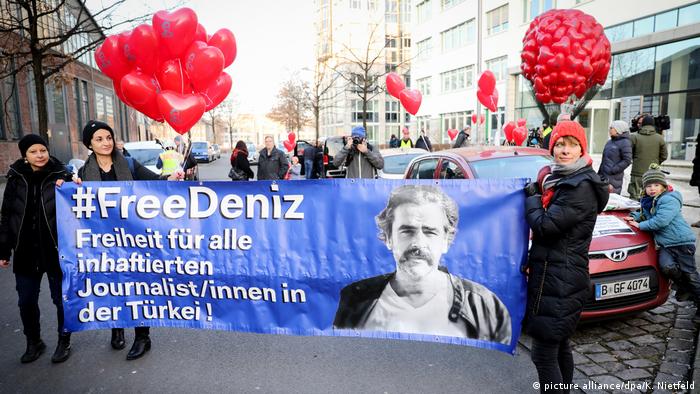 His lawyer, Veysel Ok, said Yücel's case is unique because he was a high-profile foreign correspondent who had been a repeated target of top politicians.

"From the day he was arrested up until the hearing, this case's unique characteristic is that it reveals the extent of interference in the judiciary and how politics and judiciary are intertwined," he told DW by phone.

The high-profile case also drew German public attention to the justice system in Turkey, where according to Ok "ridiculous and sloppy indictments" leading to drawn-out trials and detentions are the norm.

Yücel became a target of the Turkish government through his critical reporting on sensitive topics, such as the Kurdish issue, the Syrian war and hacked documents.

The dual German-Turkish national was initially detained after he voluntarily went to the Istanbul Police Department on February 14, 2017 to give a deposition after pro-government media reports suggested he was under investigation in the so-called Redhack case, which also implicated other journalists. The investigation into Yücel was launched after authorities received an anonymous tipoff about his involvement.

Yücel had written for Die Welt on the leaks published by the leftist hacker group Redhack allegedly revealing emails from the private account of Berat Albayrak, the energy minister and the son-in-law of President Recep Tayyip Erdogan. The emails detail Turkish support for Syrian jihadi rebel groups and attempts to control the media.

The government banned reporting on the hacked emails and cracked down on webpages that did.

However, after 13 days in custody, an entirely different set of charges related to terrorism and incitement were leveled against Yücel and his file was separated from the Redhack case. He was then sent to a high-security prison outside Istanbul pending trial without evidence or an indictment.

During this time, pro-government media and Erdogan on multiple occasions referred to Yücel as a German "spy" and a Kurdish militant "terrorist." For a while in prison, he had no access to German diplomats.

In running this campaign, the pro-government media and ruling party politicians were trying to "create perceptions in the public" that Yücel was a dangerous criminal needing to be held in solitary confinement, Ok said.

"There was a big expectation created by the media and politicians that there was a pile of evidence against Yücel," Ok said.

Yet when an indictment was presented and accepted by the court this February, it turned out to be only two-and-a-half pages long. One page consisted of mandatory personal information, the second was mostly a list of Yücel's news headlines and another just a half-page demanding a prison sentence.

Read more: Veysel Ok's full statement to the court on the first day of Yücel's trial

Turkey is a 'divided country'

In other words, OK said, police and prosecutors were unable to find any evidence against Yücel beyond news reports and vague allegations citing contact with "terrorists."

The "terrorists" refer to journalists, civil society groups, lawyers, news sources, parliamentarians and officials who Yücel contacted as part of his work, according to the defense, which says these alleged "terrorists" have not been convicted.

Tens of thousands of people in Turkey are in prison or facing trial for alleged ties to the Gulen movement, which the government has blamed for the failed coup attempt in 2016, or for alleged ties to Kurdish militants from the Kurdistan Workers' Party (PKK).

Meanwhile, as the Turkish court system slowly moves along, Yücel's case is before the European Court of Human Rights, where the court is likely to rule against Turkey.

The sale of the independent Dogan Group to a firm close to President Recep Tayyip Erdogan has sparked anger and dismay among many people in Turkey. Does it spell the end for independent media in the country? (22.03.2018)

A Turkish-German journalist from the ETHA news agency has been detained in Turkey, along with two colleagues. The organization's editor-in-chief says the arrests are part of a wider crackdown on anti-government press. (16.04.2018)

Turkey's president, Recep Tayyip Erdogan, has won another term, securing an outright majority according to official results. The elections are the first held under a new system which gives the president expansive powers. (25.06.2018)