When are German police allowed to use guns?

Deadly police shootings in the US have sparked a global debate over the use of force by police, and a shooting in Bremen is facing scrutiny. DW takes a look at rules in Germany and when officers are allowed to open fire. 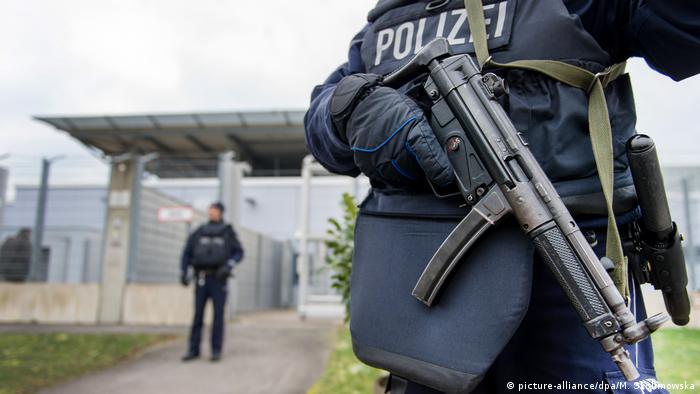 Thursday's police shooting of a knife-wielding man in the northern German city of Bremen is now under investigation. Authorities said the man attacked a police officer during what they termed a "psycho-social crisis." The man later died in hospital.

In a separate incident in January, a 37-year-old man stood outside a police station in the western town of Gelsenkirchen, brandishing a knife and a baton. After the man charged officers, he was shot four times and later died. Officials later said they believed mental health issues were at play.

Although police have been criticized for their use of force against potentially mentally ill suspects, police shootings are generally rare occurrences in Germany — especially when compared to the United States and other countries.

Germany's laws restricting the private use of guns contributes, in part, to the lower number of police shootings as suspects aren't as likely to have firearms of their own. This lowers the risk of officers perceiving a situation as dangerous enough to merit the use of firearms.

Although the number of fatalities is lower than in other countries, German police have increasingly been firing their weapons at suspects in recent years.

According to police data gathered by the tabloid Bild newspaper, 14 people died in 2019 after being shot by the police, while another 29 were injured. The total number of instances where guns were used reportedly rose as well, up to 67 cases for the year compared to 56 the year before.

If confirmed, the number of fatalities is double that of what it was five years ago.

Police officers in Germany generally carry a pistol, but the rest of their gear also depends on the state they're operating in.

"A service weapon is part of the equipment of police officers, which is carried while on duty," Mechthild Hauff, the press spokesperson for the German Police University told DW.

Besides pistols, officers are also permitted to carry revolvers and rifles in certain situations — although the ammunition for these weapons is tightly controlled. Police can also carry batons, pepper spray and also stun guns in certain states. 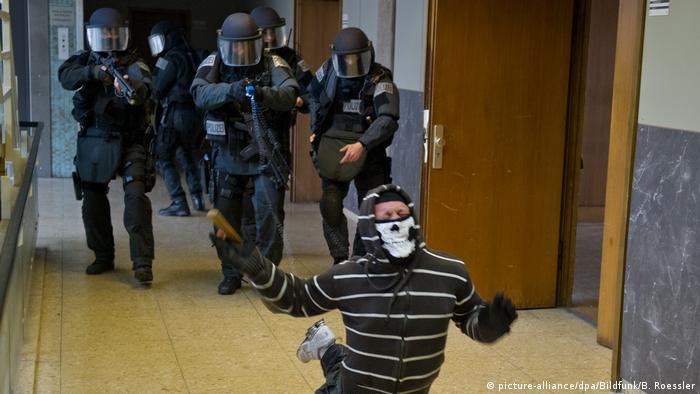 Germany's 16 states, as well as the federal police, each have their own laws laying out what police are permitted and not permitted to do. Although each state has its own regulations, most adhere to similar restrictive rules when it comes to firearm use.

In North Rhine-Westphalia (NRW), Germany's most populous state, as well as Bavaria, the laws state that firearms may only be used to render a person unable to attack or to escape.

"A shot that will almost certainly be fatal is only permitted if it is the only means of preventing danger to the life or limb of a person," both laws state.

Some states also require that officers fire a warning shot before using potentially lethal force. Others bar officers from shooting at a person in a crowd, unless it's the only way to prevent a serious act of violence, and only if they first alert the crowd that they are about to shoot.

The vast majority of states have sections in their laws that explicitly dictate when it is allowed for officers to fire their weapons at people, although there are a few states that have more general rules.

Berlin, Schleswig-Holstein and the federal police do not have explicit chapters on the use of firearms, instead using more general regulations on the "use of force" and general measures that police are allowed to take while dealing with suspects.

Ethics 'at the core' of police training

Police training, which typically lasts around three years in Germany, emphasizes that guns are only to be used as a means of last resort.

Even the classes on teaching recruits how to use firearms are dubbed "shooting/non-shooting training."

During their training, recruits undergo extensive weapons training but also learn how to de-escalate situations — running numerous drills on how to speak calmly with suspects and how to get a situation under control.

"Policemen and policewomen often have to make serious decisions in a matter of seconds and constantly adapt their position and to the respective situation," chief inspector Sevinc Sethmacher, a spokeswoman for the NRW police academy, told DW.

"A professional approach, legal assessment, and ethics are at the core of our activities," Sethmacher said.

Help for officers after a shooting

Police not only receive training on how to determine whether a firearm should be used or not, but they also receive help processing the event afterward.

Many struggle with feelings of guilt or doubt whether they acted correctly in the moment.

Many states offer around-the-clock mental health services and also require officers to attend psychological counseling after firing their service gun — even if no one was injured or killed.