Why German police officers rarely reach for their guns | Germany | News and in-depth reporting from Berlin and beyond | DW | 27.08.2014

Why German police officers rarely reach for their guns

German police officers rarely reach for their guns - for good reason. But when deadly shootings do occur, the victims are often part of an especially vulnerable group in society. 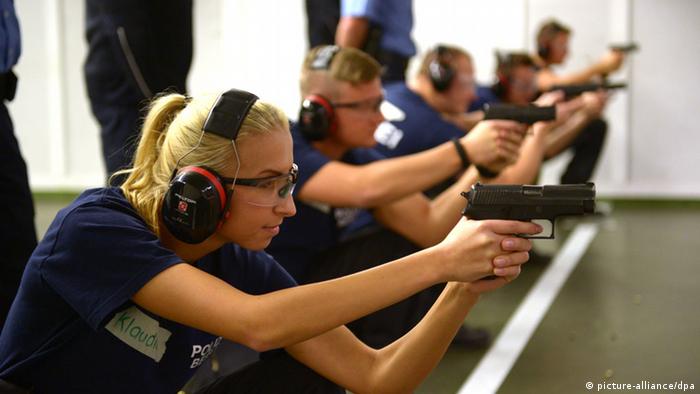 Police officers are armed and under pressure.

They are called to situations they can't assess and "in that kind of a situation, people have tunnel vision, that is, limited perception," says Gerd Enkling, chief police coach in the southern state of Bavaria.

Myriad factors influence the course of events: whether passers-by are in the area, the weather, whether the officers are being yelled at, whether they were forced to run to the site and whether they can keep a distance. "These situations are extremely complex," Enkling explains.

In the US, such situations often have a deadly ending. In early August, a white police officer shot black teenager Michael Brown.

Several hundred people, not all of them armed – and this is only an estimate, there are no reliable figures – are killed by police officers in the US every year. Unlike Germany, where police rarely use their guns: there were eight fatalities in the past two years and 109 deaths by service weapons in Germany since 1998. Unlike the US, where almost as many weapons are in circulation as the country has citizens, German police officers are rarely confronted by armed people.

This may be the main reason for the widely differing figures, but observers note that German police are also quite cautious where using their weapons.

There has been a significant decline in the number of shots fired at people since the 1970s, says Otto Diederichsen of the Berlin-based Institute for Civil Rights and Public Safety: "In that respect, a lot has happened, and that's certainly positive."

The impact of stress

"Don't shoot" - that's not only the title of a police weapons training course in the state of North Rhine Westphalia, it's a main goal. First, recruits learn how to use a gun. "You have to know how to handle it - it's not a toy, it's life-threatening," says Uwe Thieme, head of the operative and hazard control section of police training in Germany's most populous state. Target practice at the range is just a beginning, he says, adding that afterwards, the recruits focus on training stressful situations. 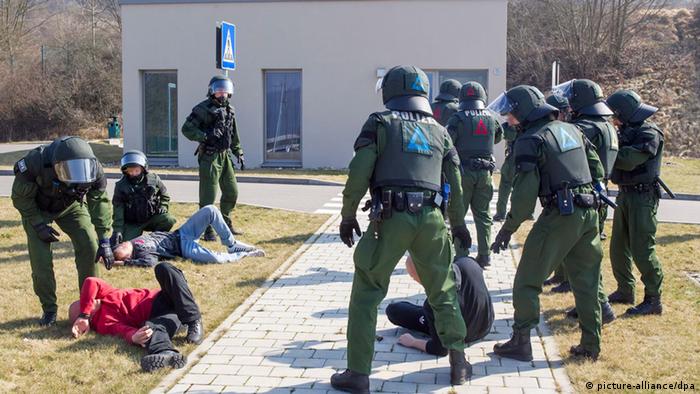 Role-play exercises are an important part of police training

Role games make up a large part of police training, which usually takes three years, in all of Germany's 16 states. "If tunnel vision sets in when we're in a stressful situation, we resort to proven and tested tactics, everyone does that," Enkling says. If an officer has practiced again and again not to act immediately but to get a handle on the situation first, to speak calmly to a suspect - he stands a good chance to fall back on that pattern when the situation arises.

Things go wrong all the same, and the past years' fatal shootings were by no means unavoidable. Thomas Feltes, a criminologist at the Ruhr University Bochum, points out a case that occurred in Berlin last year: a police officer fatally shot a man who stood by a fountain in front of City Hall, naked and armed with a knife. The man was schizophrenic. Berlin's RBB TV channel found out that two-thirds of the people who were killed by police gunfire over the past five years were either mentally ill or known to the police as having mental problems.

"Many officers aren't aware of the fact that they're dealing with mentally ill people," Feltes says. "We need them to be trained more soundly." It's also worth considering whether German police officers shouldn't use taser guns or dragnets in certain situations - a practice that is quite common in the US.

When a police officer in Germany shoots at a person, or even an object, the prosecutor's office invariably starts preliminary proceedings.

Often, however, these cases are closed too quickly, like the shooting in front of Berlin's City Hall, Thomas Feltes says, adding that, where fatal gun shots are concerned, he would like the prosecution to "take a closer look."

Opinion: After Ferguson, what now?

More than two weeks after the fatal shooting of Michael Brown, St. Louis is mourning the young black teenager. Taking steps to end racism in the US is also in the interest of white people, says DW's Miodrag Soric. (25.08.2014)

Unrest continues in the US town of Ferguson. Reporters are complaining that police seem to be targeting them, as well as protesters, with arrests and by keeping them from certain areas - supposedly for safety reasons. (19.08.2014)