Police in Gelsenkirchen said the alleged perpetrator was attacking officers when he was shot. A similar incident in France saw another alleged attacker shot and injured by police. 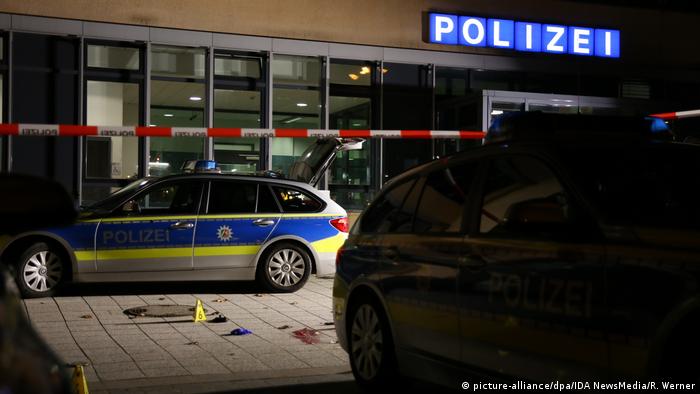 Police in Germany have shot dead a man who was trying to assail police officers with a knife in the west German city of Gelsenkirchen.

The man hit a patrol car with an object and sought to charge at officers standing by the vehicle "with a raised object," a police spokesman told news agency Agence France-Presse on Sunday.

Police also said the attacker had a knife behind his back and called out, warning him to stop his assault. However, these demands fell on deaf ears and a 23-year-old policeman shot and killed the potential assailant.

Many states are on high alert following a series of Islamist attacks, including a truck rampage at a Berlin Christmas market in 2016 that killed 12 people.

Meanwhile, in France, also on Sunday, police shot and injured a man who had rushed toward police officers wielding a knife screaming "Allahu akbar" ("God is greatest"), local officials said.

The incident occurred in the city of Metz and the local public prosecutor's office said it was communicating with the French anti-terrorism prosecutor's department. Interior Minister Christophe Castaner confirmed an investigation had already begun.

"I praise the quick thinking of the @PoliceNat57 (Moselle police force), which intervened to apprehend the individual. A probe is underway to determine the precise motivation and circumstances behind the act," Castaner tweeted.

The prosecutor's office said the suspect had suffered gunshot wounds to the upper leg. It added that he was already on a list for links to militant groups.

The Metz incident is the second to occur in France in the space of two days after a man went on a stabbing spree in Villejuif, on the outskirts of Paris, killing one person and wounding two others. He was subsequently shot dead by officers.

The US assassinated Iran's top army general Qassem Soleimani by drone strike on Friday. DW takes a look at how Germany's domestic press reported the news. (03.01.2020)

Emergency services in Germany's Harz mountain region were called out when a man celebrating the new year got stuck in a chimney. Police said they were unsure about how the man got there. (01.01.2020)

Ursula Heinen-Esser has expressed her dismay at the accessibility of the products that resulted in the inferno. More than 30 animals, including a number of apes, were killed in the disaster on New Year's Eve. (05.01.2020)

A fire has destroyed one of Germany's culinary institutions, the Schwarzwaldstube. The Black Forest eatery has held on to its award of three Michelin stars for longer than any other restaurant in Germany. (05.01.2020)

Police said the suspect is believed to be a resident at the home for asylum-seekers on Lake Constance in southern Germany. He allegedly "stabbed indiscriminately" at other shelter occupants during the overnight attack.