A deadly stabbing spree at a park on the outskirts of Paris is being treated as a terrorist attack, French authorities said on Saturday.

One man was killed and two women were injured in the knife rampage, which took place around midday on Friday in a park in the town of Villejuif, about 8 kilometers (5 miles) south of central Paris, prosecutors said.

Although the attacker had a history of mental illness, investigators also established that he'd adopted extremist views and that the attack was planned in an organized way.

French anti-terrorism prosecutors have now taken over the probe.

Franck Le Bohellec, the town's mayor, identified the person who died as a 56-year-old local who was walking in the park with his wife at the time of the incident.

After stabbing the victims in the park, the attacker headed towards a shopping center in the neighboring suburb of L'Hay-les-Roses, where he was shot and killed by police. 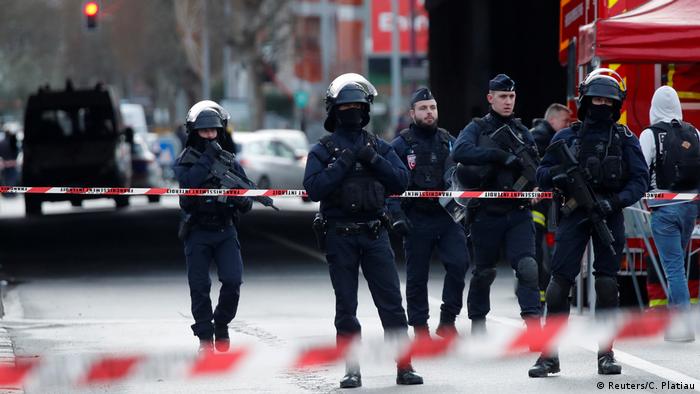 Paris police secured the area after they shot dead a man who stabbed several people.

Man behind the attack

Religious documents, including a Koran, were found among his belongings, although he had not been on authorities' radar as someone who had been influenced by radical Islamists.

The attacker, only identified as Nathan C., was born in 1997 in Lilas, a northeastern suburb of Paris. Local authorities confirmed that the suspect had shouted, "Allahu Akbar," or "God is great," during the attack and that he'd spared one man who said he was a Muslim.

The attacker had no criminal record and was not known to intelligence services.

Attacker would have claimed more lives

On Friday, officials praised the actions of police, saying it was likely the attacker would have claimed more victims.

"Luckily, the police were quickly alerted and made their way rapidly to the scene where they neutralized him by killing him," L'Hay-les-Roses Mayor Vincent Jeanbrun told French broadcaster BFMTV.

Laurent Nunez, the deputy interior minister, visited the scene and called the actions of the police "extremely courageous."

French prosecutors have announced they will launch a terror investigation into Thursday's knife attack, after four police officers in Paris were stabbed to death by a colleague. (04.10.2019)

US President Donald Trump has urged Americans to unite against the "evil scourge of anti-Semitism" after a man stabbed five people at a rabbi's house in New York during Hanukkah celebrations on Saturday. (30.12.2019)

A Polish national who went after the London Bridge attacker with a 1.5-meter whale tusk is to receive a medal for courage from his country. Known only as Lukasz, the chef is being treated in hospital for stab wounds. (01.12.2019)