French prosecutors have announced they will launch a terror investigation into Thursday's knife attack, after four police officers in Paris were stabbed to death by a colleague. 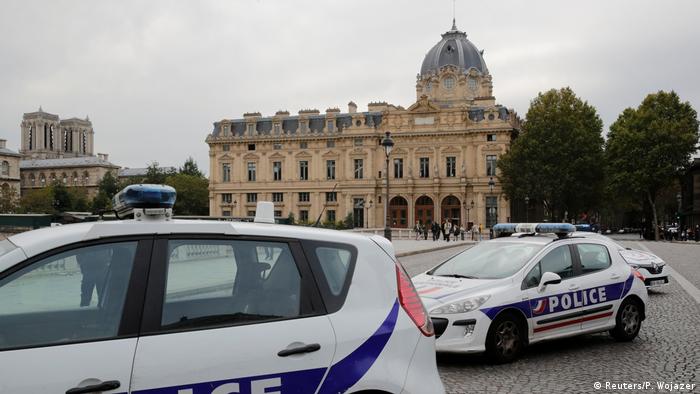 French prosecutors announced on Friday that they will be launching a terror investigation into the fatal stabbings on Thursday at the Paris police headquarters.

The Paris prosecutors' office announced that they had found elements that suggested a motive for the quadruple murder "in relation with a terrorist enterprise."

David Le Bars, head of the Union of National Police Commissioners, told French broadcaster BFM TV that the decision to launch a terror probe came following a search of the suspect's possessions.

"We knew that searching through his computer history, the websites visited, his relations, we would have some information," he said.

The civilian employee stabbed four colleagues to death with a kitchen knife on Thursday. The IT specialist was then shot dead by a rookie officer who had only finished police academy training six days previously.

The murder investigation has now been handed over to the Paris anti-terrorist prosecutor's office (PNAT).

'No indication of radicalization'

Earlier on Friday, a French government spokeswoman said that there was no suggestion that the suspect had been radicalized.

Sibeth Ndiaye said that, contrary to the "wild imaginings on social networks" regarding the attack, there was "no indication of possible radicalization" on the part of the suspected attacker.

"The fact that someone converts to Islam is not an automatic sign of radicalization," she added.

A minute of silence was held at a remembrance ceremony outside the police headquarters on Friday morning.

Visions in the night

French media reported that the attack suspect, who killed three officers and an administrator and seriously injured one more person, converted to Islam 18 months ago, fueling speculation that religious radicalization may have played a role in the attacks.

According to FranceInfo and BFM TV, the wife of the suspect told police that her husband had visions and made incoherent remarks on the eve of the attack. She also told investigators that he had the feeling that he was insufficiently appreciated by his superiors and had not received the promotion that he believed he deserved, FranceInfo said, citing a source close to the investigation.

The 45-year-old suspect, who was 70% deaf, worked as a technology administrator in the police intelligence unit since 2003 and had two children.

Officials said on Friday morning that the suspect does not have a history of psychiatric problems.

The attacks came a day after French police officers went on strike across the country to protest a growing mental health crisis in the force.

Life in the Paris music club's street seems to have returned to normal. Yet omnipresent police and a new counterterrorism law reveal the lasting effects of the night when 90 people lost their lives at the Bataclan. (13.11.2017)

The French interior minister has ordered an investigation into why police used tear gas on climate protesters. A widely shared video shows protesters being sprayed with tear gas after refusing to move from the bridge. (01.07.2019)