An police administrator armed with a knife has killed at least four officers inside police headquarters in central Paris. The attacker, reportedly a longtime civilian staff member, was shot and killed. 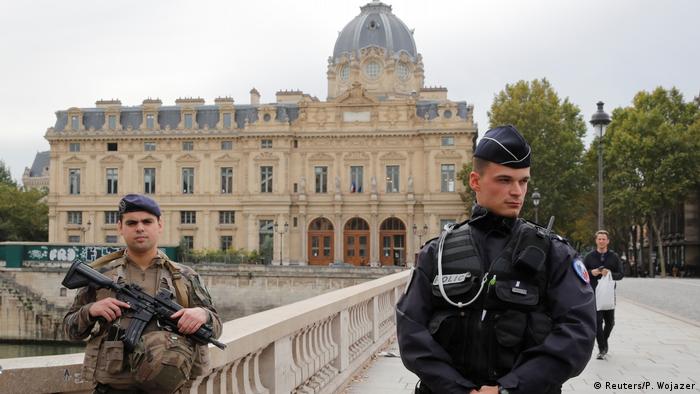 A knife attack at the Paris police headquarters on Thursday left at least four police employees dead and at least one police officer injured.

The attacker was shot dead by another officer. He killed one woman and three men in the attack. Three of them were police officers, one was a civilian employee.

The attacker was a technology administrator in the police intelligence unit. The French interior minister said he "had never shown any behavioral difficulties." French media reported he used a ceramic knife in the attack.

Television pictures showed multiple emergency service vehicles at the location near Notre Dame Cathedral. The area was sealed off and the local metro station, Cite, closed.

Police did not immediately confirm details of the incident or the motive of the attacker, however investigators told reporters they are exploring the possibility of a personal conflict.

Investigators later confirmed they were working with anti-terror prosecutors, but that they were not yet convinced of a terror motive.

Police raided the attacker's home on Thursday afternoon and arrested his wife. She was not charged. The surrounding area was locked down by police

"Paris weeps for its own this afternoon after the horrific attack at the Police Prefecture," she wrote. "The toll is heavy: Several police officers have lost their lives."

A third officer, who Siamandi described as the person who shot and killed the assailant, came out on his knees, also in tears.

The incident happened a day after French police officers went on strike across the country to protest a growing mental health crisis in the force.