A Polish national who went after the London Bridge attacker with a 1.5-meter whale tusk is to receive a medal for courage from his country. Known only as Lukasz, the chef is being treated in hospital for stab wounds. 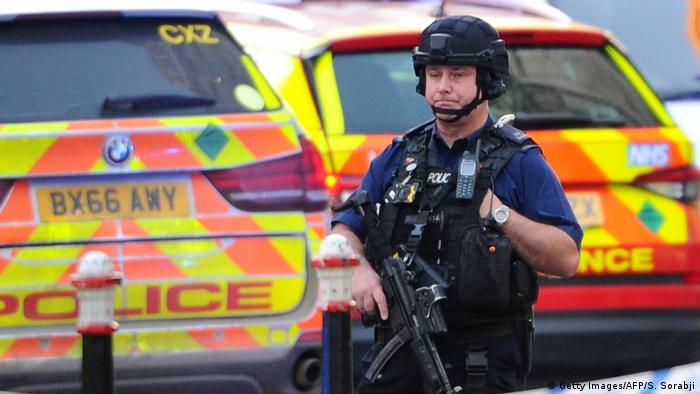 Poland says it will award its highest medal for sacrifice and courage to a Polish national who played a key role in preventing the London Bridge attack from escalating further.

A spokesman for the country's justice minister, Zbigniew Ziobro, said on Twitter he would request the bravery honor from the country's president. He added that the man — known only as Lukasz— "risked his own life" and "helped to overpower the terrorist."

British media reported that Lukasz, who works as a chef, snatched a 1.5-meter (5 foot) narwhal (whale) tusk from the wall of Fishmongers' Hall as Friday's stabbing attack unfolded.

A colleague told The Times: "Lukasz grabbed a nearby pole and ran at him, getting stabbed in the hand in the process but continued to pin him down. Being stabbed didn't stop him giving him a beating. Lukasz is a hero!"

Video footage shows a man waving the huge tusk, while another man sprayed a fire extinguisher in the face of the knife-wielding attacker, Usman Khan.

The chef remains in a London hospital being treated for stab wounds following the attack, which left two people dead. Khan, who wore a fake suicide vest, was shot dead by police.

Polish Prime Minister Mateusz Morawiecki said on Facebook that Warsaw was proud of Lukasz, and that "every weapon is permitted against terrorists."