Angela Merkel is the odds-on favorite in the German elections on September 22. Her main challenger, Peer Steinbrück of the Social Democrats, is struggling on many fronts. But there’s still room for surprises. 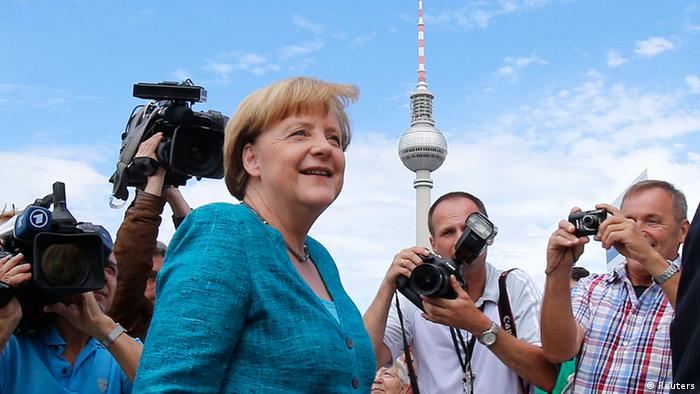 Angela Merkel's main challenger has all the potential to stage a comeback - but it still doesn't look like Steinbrück will become Germany's next chancellor. At first glance, Peer Steinbrück seems like the right man at the right time: he is a finance expert and has an insider's knowledge of the strains the national budget is under.

He was finance minister in the grand coalition of Merkel's Christian Democrats (CDU) and the SPD from 2005 to 2009. Now he wants to topple his ex-boss, but it will certainly be an uphill struggle. And poll results confirm: voters support Merkel, not Steinbrück.

There are several reasons for Merkel's primacy. She has reached the peak of her career. She is unchallenged in her party, and she's the one who dominates Europe's current euro and debt management in Brussels. The majority of Germans respect and admire her for that. This leaves little room for attack, both for the SPD and for Steinbrück.

"The SPD keeps stressing everything that's going wrong," communications researcher Christoph Moss told DW. And the party has failed to meet with the zeitgeist in Germany, because "most Germans are currently quite pleased with their situation." That's why voters want to know how exactly Peer Steinbrück and his party are planning to improve their situation. 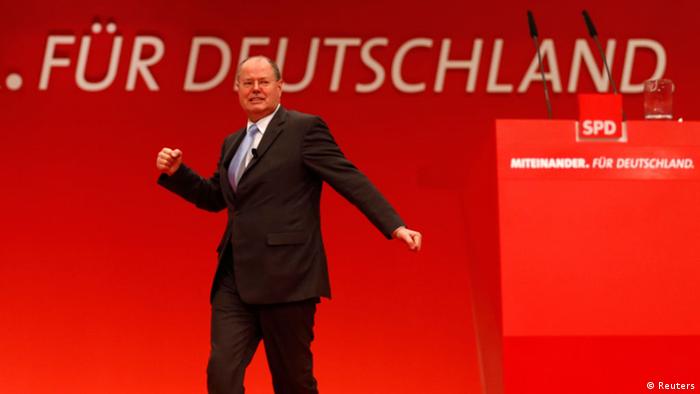 He is all for it! Peer Steinbrück, the Social Democrats' leading candidate, wants to become German Chancellor.

Steinbrück and his SPD do have something to show for - although it's something most SPD members are not proud of. When Gerhard Schröder was in office as chancellor before Merkel, he passed a significant social reform package called ‘Agenda 2010'.

Experts see it as the foundation of Germany's current economic strength in the midst of an international debt crisis. The agenda meant that a Social Democrat - of all people - was the first to drastically reduce Germany's state welfare system.

Schröder did meet with heavy resistance from his own party. Social protection schemes became more expensive, unemployment pay was reduced, and the pension age was raised - in other words: the burden was shifted from the state to the people.

Traditional SPD supporters were hardest hit. The party lost a considerable amount of members as a result. Many SPD voters refused to cast their ballot in the following elections.

Today, the SPD is feeling remorse, says Edgar Wolfrum, a historian at Heidelberg University who lectures on the Schröder era. "The problem is that the SPD is now distancing itself from what can formally be called a government success."

Wolfrum speaks of a "delegitimization of the policies the SPD pushed through in the years between 1998 and 2005." As for Steinbrück, he has always been and still is a supporter of the state welfare reform.

Today, all political parties agree that the measure was absolutely vital at the time. Ironically, the measure still receives more support from conservative parties than from the SPD itself. It was the SPD that made the state strong for the crisis - and Angela Merkel is taking the credit. 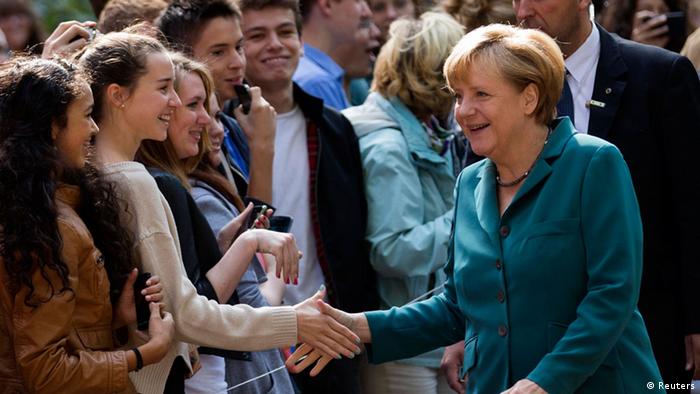 The SPD wants to introduce a minimum wage of 8.50 euros ($11.30) - something the CDU and its Bavarian sister party CSU reject. They want unions and management to negotiate minimum wages bilaterally, without state interference.

As far as taxes are concerned, the SPD wants the rich to pay their share, while CDU and CSU have their focus on public debt reduction and on increased spending. CDU/CSU want to do without raising taxes. All in all however, center ground takes center stage in both manifestos.

Chancellor Angela Merkel has chosen the slogan 'Maß und Mitte', which suggests that extremes are to be avoided on all levels. And: She won't allow for "any additional strains - neither on citizens nor on business."

Almost all parties are targeting the core of German society - which goes at the detriment of differentiation, says Hamburg-based PR consultant Wolfgang Raike. "We're no longer seeing any polarization."

The days of 'Freedom, not Socialism', the CDU/CSU's campaign slogan in 1976, are over. Since the nuclear disaster in Fukushima, the CDU and the SPD even agree on the formerly controversial topic of atomic energy.

Merkel is the manifesto 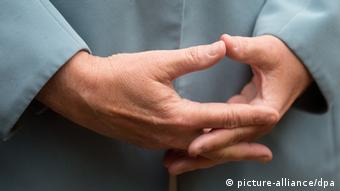 Angela Merkel is not exactly known for her wild gestures.

All of this plays into Merkel's hands. She is not the kind of politician who will convince others with her positions. She is reserved and hardly ever makes any surprising statements. She has her emotions under control and generally cultivates a sense of frugality. Even her hand posture has gained fame: both thumbs and both index fingers touch each other, and form the shape of a diamond.

"She's quite normal," notes Edgar Wolfrum. "She doesn't excel; she's good, average. And that's something everybody can identify with. That's her recipe of success. The party's manifesto - she's it."

Grand coalition is an emergency solution

As things are looking now, Merkel's only potential stumbling block could be the liberal party FDP, her junior partner in the current government coalition.

The mood has been far from good between the partners lately. During campaigning liberal politicians occasionally took the lead in criticizing Merkel's party: the CDU/CSU want to raise child allowance, raise pension payments for mothers and protect tenants by introducing a ceiling for rental prices when a new tenancy is granted.

All of those are nice goals, says Rainer Brüderle, the FDP's leading candidate, but according to him his party finds it "vital that we get back in the black with the national budget. We have convinced all of Europe to commit themselves to a brake on debt by introducing the fiscal compact. So we have to stick to it ourselves of course!"

Whether Merkel will be sworn in as chancellor for the third time also depends on whether or not the FDP manages to surpass the five-percent hurdle and actually make it into parliament. At least five percent of votes are required in Germany for any political party to be represented in the Bundestag.

Should the FDP fail to get the necessary votes, then even the good result of 40 percent, which polls suggest Angela Merkel and her CDU/CSU are likely to receive, wouldn't help.

In the case of FDP non-representation in the Bundestag, the SPD and the Greens could come out winners of the election after all - because the number of their votes taken together is likely to be higher than the 40 percent the CDU/CSU is expecting.

Paradoxically, Steinbrück could become Chancellor even with a poor result for his party - provided the forecasts prove true and the Greens really do get between 15 and 20 percent of votes. But if both don't happen - i.e. the FDP doesn't surpass the five-percent-hurdle and SPD and Greens don't get enough votes together - the only remaining solution is a grand coalition between CDU/CSU and SPD.

It's the least favorite option, but an effective one when it comes to passing laws. Governing without true opposition in parliament remains an emergency solution in Germany - one that worked well enough from 2005 to 2009. 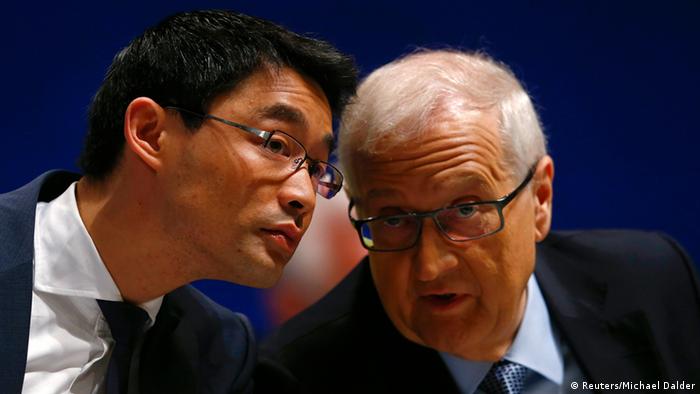 Will the FDP even make it into parliament on September, 22nd? Party leader Philipp Rösler (l) and leading candidate Rainer Brüderle

Non-voters are a growing group

But there's one thing that all parties dread more than the grand coalition: the group of non-voters. Their numbers have more than tripled since the 1970s, making them the largest group of politically mature citizens today.

The number of consistent non-voters is strikingly high amongst older people. "That makes for a social imbalance in the election results," says Dietmar Molthagen, head of empirical social research at the Friedrich-Ebert foundation.

"When certain groups don't take part in the election any more, their interests are likely to be less represented as a result." For the first time in the history of the Federal Republic of Germany, on September 22nd, non-voters could become the strongest political group of all.

Why Germans are losing interest in politics

Voter turnout in Germany is declining, political parties have shrinking membership. There are fewer older people and young people prefer to get active elsewhere. Are Germans turned off by politics? (20.09.2013)