What is the status of German deportations to Afghanistan? | Germany | News and in-depth reporting from Berlin and beyond | DW | 12.09.2017

Germany has resumed deportations of rejected asylum seekers to Kabul, reviving the heated debate over the security situation in Afghanistan. InfoMigrants looks at the current developments. 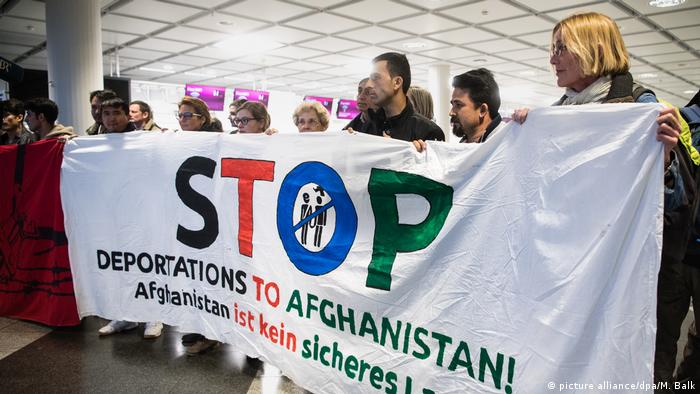 This Tuesday, a plane with at least 12 rejected asylum seekers took off from Düsseldorf to Kabul, ending a brief moratorium on deportations to Afghanistan.

Some 180 activists protested the move at the airport, with placards saying "Afghanistan is not safe," and "No deportations to death."

Berlin and Kabul reached a deal on repatriating failed asylum seekers in October 2016, with first deportation flights heading to Kabul last December. In June, however, Chancellor Angela Merkel decided to hold off on relocations after a truck bomb killed 90 people in Afghanistan's capital. German embassy building in Kabul also suffered damage in the attack.

With the election campaign heating up in August, Berlin decided to restart the deportations program.

From January to August 2017, there were 134,935 initial asylum applications in Germany. Of those, 9.1 percent came from Afghanistan, the third-highest group after Syria and Iraq. In the first half of 2017, the German government sent back 261 people to Afghanistan. As of August, around 10,000 Afghans whose asylum requests were denied are no longer legally allowed to stay in Germany. The policy change occurred because some government officials consider it a safe country of origin as compared to countries like Syria or Iraq, where active conflicts are displacing millions. 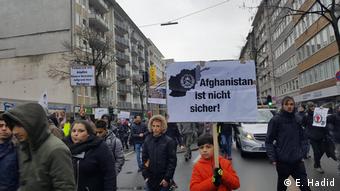 Across Germany, pro-asylum activists have staged protests against deportations to Afghanistan

German human rights group Pro Asyl has heavily criticized the deportations from Germany to Afghanistan and is "outraged" by the German government's recent declaration to restart deportations there. "War dominates Afghanistan. Hundreds of thousands of people are fleeing," said Günter Burkhardt, the organization's managing director. The Pro Asyl organization has frequently demonstrated at German airports where the deportations have taken place. In late August, 500 students protested in the German city of Offenbach over the pending deportation of their Afghan classmates. In March, high school students in Cottbus made headlines across Germany with a similar campaign to save three classmates from being deported to Kabul.

German Chancellor Angela Merkel initially embraced an open-door asylum policy in 2015, allowing over 1.2 million asylum seekers into the country. But following events such as the Cologne New Year's Eve assaults in 2015 and the attack on a Berlin Christmas market by a rejected Tunisian asylum seeker, Merkel has begun to take a tougher stance on deportations. Merkel's Christian Democratic Union has advocated for more deportations, with Afghanistan being the main country of focus. 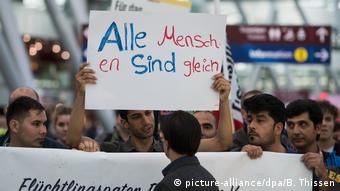 The Social Democratic Party, led by Martin Schulz, wants to stop deportations to Afghanistan on security grounds, as do the Left party and the Green party. In February of this year, the German government unveiled a program called Starthilfe Plus, which would pay €1,200 to migrants who would return to their country before their asylum status was decided.

Although Afghanistan is safer now than it was 15 years ago, security threats still persist. In addition to the bomb attack in Kabul that occurred in June, there have been numerous attacks in Afghanistan over the past year. In late August, 'Islamic State' militants stormed a mosque, killing at least 20 people. In February, the Afghan Supreme Court was attacked by a suicide bomber, killing 20 people. In March, two attacks occurred, with one in Kabul at a police station on March 1 killing seven people and one just a week later killing 50 people at a hospital.

Attacks like these aren't the only issue, however. Minorities from Afghanistan who make it to Germany may face discrimination. For example, in January this year an Afghan-Hindu was deported. Afghan-Hindus face religious persecution in Afghanistan as it is a conservative Islamic country. Other minorities, like the Shiite Hazara, face danger from Sunni extremists in their home country.

The German media has reported that refugees have been vacationing in their countries where they have fled persecution. How often has this happened, and what types of consequences exist for the refugees who do this? (11.09.2017)

Chancellor Angela Merkel has criticized Germany's lack of progress in deporting migrants who have had their claim to stay in the country turned down. She said it was necessary to reassure voters about immigration policy. (15.10.2016)