Dozens dead after 'IS' attack on Shiite mosque in Kabul

Islamic State fighters have killed several people and injured many more at a Shiite mosque in Kabul. The attack lasted for four hours before security services could kill the assailants without harming hostages. 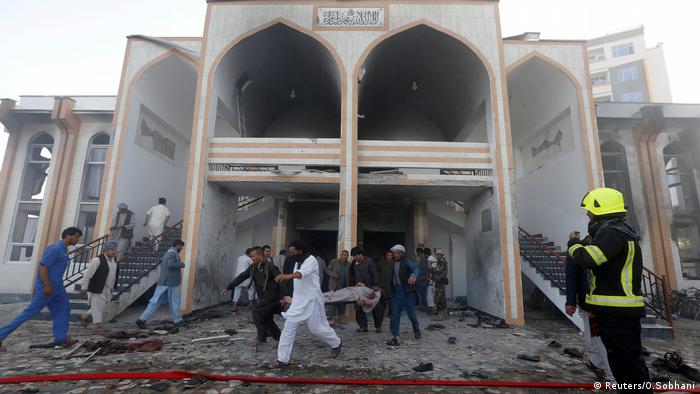 At least 20 people were killed when militants loyal to "Islamic State" (IS) stormed a mosque in the Afghan capital, Kabul. This was the latest in a string of attacks targeting Afghanistan's minority Shiites.

The attack occurred during afternoon prayers and reportedly lasted for four hours, with the death toll expected to rise due to the dozens of seriously wounded victims who were brought to local hospitals.

Two assailants blew themselves up inside the mosque, while a further two were shot dead by Afghan security forces.

Afghan President Ashraf Ghani said that IS terrorists were turning to attacks on places of worship because they were losing on the battlefield, and called on all Islamic clerics in the nation to condemn the violence.

One of the first groups to do so was actually the Afghan Taliban, which is fighting an armed insurgency against Ghani's government. Spokesman Zabihullah Mujahid made it clear in a phone call to the news agency AP that his group had nothing to do with the attack and did not approve of it.

The attack comes on the heels of US President Donald Trump announcing his new strategy for America's longest war. After promising a complete removal of troops during his campaign, Trump said on Monday that after speaking with advisors, he realized a pullout was simply not feasible.

He added that he would send more troops to the region, but did not give a specific number.

Trump said that the removal of US soldiers from the country would leave a "vacuum" that could allow both the Taliban and IS to make gains against Ghani's democratically elected government. He added that the US would focus on "killing terrorists" instead of "nation building," without clarifying what he meant by either of those terms, though he did say he believed the future of Afghanistan should lie in the hands of its people and not Washington.

Trump's speech received mixed reactions from allies in Kabul and around the world. For its part, Ghani's government agrees that prolonged US presence is necessary as it continues its asymmetrical conflict with two armed Islamist insurgencies.

Afghanistan waiting for new US strategy under Trump

Reports of delays from President Donald Trump's administration in presenting a new strategy for the war in Afghanistan indicate dissonance in the White House on how to resolve the conflict. (04.08.2017)

About 50 people have been shot and killed in a village in a remote part of Afghanistan, where the Taliban and Islamic State have a presence. The attackers are believed to be a mixed group of Taliban and "IS" militants. (07.08.2017)