What is behind the COVID protests across Europe?

As governments introduce stricter measures to curb the latest wave of the pandemic, protests have intensified across the EU. What unites and differentiates the demonstrators? As the number of COVID-19 cases rises across the European Union, many member states are implementing stricter rules to curb the pandemic.

Not everybody is happy with these measures and across the bloc, tens of thousands have taken to the streets. But what really is behind the protests? 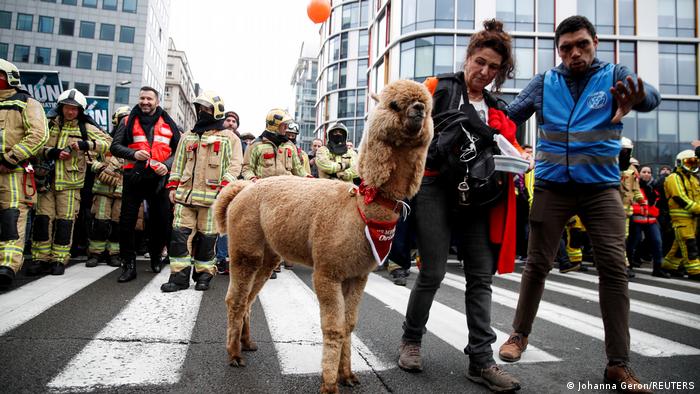 Where are the COVID protests?

The protesters are particularly irate in Germany and its neighboring countries. According to Austrian police, in Vienna some 40,000 people recently marched against the lockdown and mandatory vaccination. Some of the protests escalated into clashes.

Last weekend, some 8,000 people took to the streets in Brussels, the capital of Belgium and also de facto of the EU. Here too, some of the demonstrators clashed with police. In Luxembourg, protesters stormed a Christmas market that was blocked for anyone not vaccinated.

Similar protests have escalated in the Netherlands too. Just a few weeks ago, hundreds of people set bikes on fire in The Hague and threw stones and other projectiles at police.

In Germany, there have been protests in a number of regions. For instance, in the German state of Saxony, where large gatherings are currently banned, people have been going on "walks" organized by far-right groups. Last Friday, protesters gathered with torches outside the private home of the health minister of the state of Saxony. Protests in the Netherlands have drawn hooligans and evangelicals

From evangelicals to hooligans

The protests against the COVID measures seem to draw an eclectic mix of people: the politically disenchanted, those who are anti-state, others who are esoteric and/or anti-vaxxers. On German public broadcaster ZDF, political science professor Marc Hooghe at the Catholic University of Leuven in Belgium compared the demonstrations in Belgium with France's 'yellow vest' movement, seeing a "combination of very different social groups which all have their own motivations."

The situation in Germany is similar. "What unites them is frustration — not only with COVID-19 policies but also with democracy, with political institutions. In anthroposophist circles, anti-modern attitudes are also playing a role," sociologist Johannes Kiess from the University of Siegen in Germany told DW.

"What we have seen everywhere is that actors from the political right are at the helm, organizing and mobilizing." He rejected though the argument that the far right had hijacked the protests: "They were there from the start. And none of the other protestes seemed to mind."

Amid the demonstrators in Vienna were members of the far-right so called Identitarian Movement and on its website the far-right Freedom Party of Austria (FPÖ) has been promoting the rallies. There is also support for the protests from members of the ultra-conservative Catholic community.

"It always depends on the context and a country's political culture," said Kiess. In the Netherlands for example, evangelical Christians had protested but so had hooligans. "This is not happening in other countries in this form."

There are also huge differences even within countries: According to a University of Basel study the roots of the protests in southwest Germany are in the left-wing alternative movement, whereas in east Germany, the demonstrators often are members of the right-wing Alternative for Germany (AfD).

What are the protests really about?

"Basically, it's always about much much more than Corona," explained Kiess. In France, he said, the demonstrations were only superficially linked to the pandemic measures.

"It was actually always about Macron and his style of politics." In the Netherlands, too, protests were linked to criticism of the government's social policies. "You cannot underestimate how much fuel there is that can easily be ignited." In Saxony, the main issues were disenchantment with politics and democracy. "There's zero trust in politicians there." 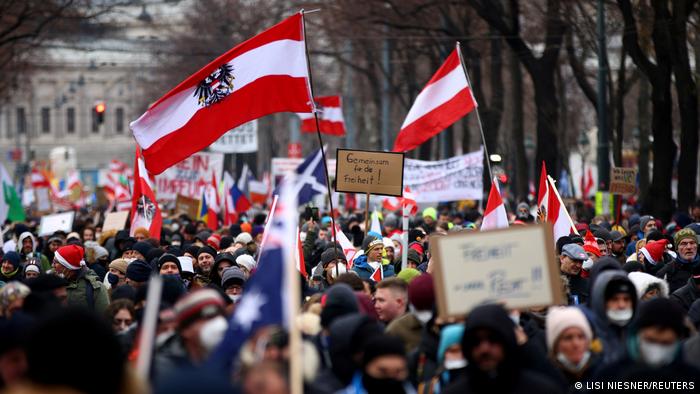 In an interview with DW, sociologist Axel Salheiser said that "right-wing extremists have taken this occasion to spread their anti-state narratives."

"The situation is escalating — but it has been doing so for months," said Kiess. The German Interior Ministers Conference also believes that the protests are becoming increasingly radical. Its chairman Thomas Strobl said that according to the domestic intelligence agency, it could be assumed that "mandatory vaccination would intensify the aggressive attitude of the protest movement."

Kiess warned that the situation could get "even worse" in the coming weeks. "There should have been more action against illegal demonstrations early on, by fining people more consistently and also dispersing the crowds for example.They were allowed to go on for a long time, especially in Germany."

Salheiser believes that even after the pandemic, the protests will continue. "The central actors driving the radicalization have an interest in finding other motives for mobilization," such as policies to fight climate change. Preparations were already underway he said.