German politicians have called on police to help enforce COVID rules that business owners have been left to implement. One minister said issuing fewer parking tickets is more sensible than ignoring rule breakers. 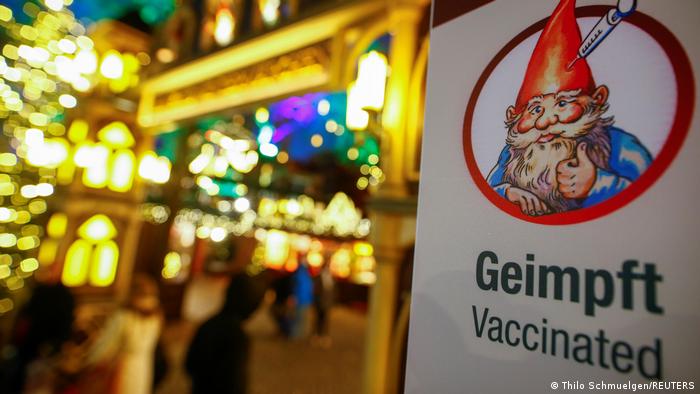 Some Christmas markets remain open in Germany, but only for vaccinated guests

Several German interior ministers on Friday called for better implementation of the country's new pandemic regulations as COVID-19 cases and hospitalizations surge across the country.

The new rules have been called a "lockdown for the unvaccinated." Essentially, they allow only people who are fully vaccinated against or have recently recovered from COVID-19 to enter public venues, including shops, restaurants, bars and Christmas markets in most of Germany.

However, as the interior ministers of Bavaria, Lower Saxony and Baden-Württemberg have pointed out, there is no national plan detailing how to enforce the rules. Instead, individual shop and restaurant owners must ask employees to check vaccination certificates.

Ministers: Why issue parking tickets in a pandemic?

Bavarian Interior Minister Joachim Herrmann said police could simply divert resources from low-priority tasks such as issuing parking tickets. The worst-case scenario, according to Herrmann, is that "fewer cars will be checked to see if they're double-parked" in favor of concentrating on something far more paramount to public safety.

"You have to have clear priorities" in a time of crisis such as this, he added.

Thomas Strobl, the interior minister for Baden-Württemberg, also pointed out that with most outdoor activities like concerts, sports events and Christmas markets canceled in his state, police had the time and resources to devote to implementing the new restrictions.

Speaking with local media, the state premiers of Brandenburg and Saxony also called for enhanced police control against illegal anti-lockdown protests. Demonstrations ranging from dozens- to thousands-strong have become a mainstay since the beginning of the pandemic, and have picked up in eastern Germany in recent months despite bans on public gatherings.

Brandenburg State Premier Dietmar Woidke told Deutschlandfunk public radio that police had to "rigorously act against" conspiracy theorists who were threatening public health as well as his and his colleagues' safety in the form of almost daily violent emails and messages.

The pleas cut across party lines, with both center-right Christian Democrats (CDU) and center-left Social Democrat (SPD) leaders calling for the changes.

DPA material contributed to this report.

Correction (December 3, 2021): This is an updated version of a previous article, to correct the spelling of names