Medics have warned that intensive care cases could soon exceed those at last winter's peak, with some 6,000 critical admissions by Christmas. Germany has recorded its highest level of coronavirus fatalities in 9 months. 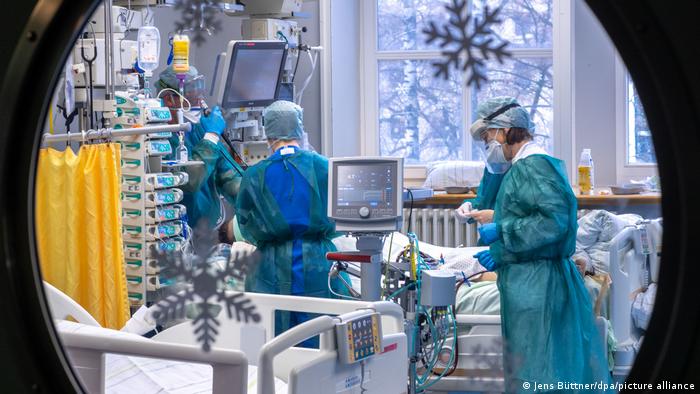 A patient being treated at an intensive care station in Rostock

The president of Germany's DIVI association for intensive care on Wednesday warned that there could be 6,000 people in intensive care by Christmas regardless of what measures are implemented.

What are doctors saying?

DIVI President Gernot Marx predicted that more than 6,000 patients with COVID-19 would need intensive care treatment before Christmas and that the all-time high from last year would be exceeded.

Marx said more than 2,300 new patients had been admitted to intensive care units in the last week alone.

"The situation is really becoming increasingly tight," DIVI chief Gernot Marx told ZDF television, urging a temporary lockdown. "We need to save the clinics from collapse."

Marx said the situation was "particularly threatening" because there are about 4,000 fewer intensive care beds fewer than were available a year ago. "The situation is really increasingly tight," he said.

DIVI has called for at least 1 million vaccinations, including boosters, to be administered daily. But while the number of
vaccinations has risen sharply in recent days, it still falls well short of that threshold at an average of 660,000.

The number — still less than half of what it was when fatalities peaked during the second wave at the end of last year — comes as authorities grapple with the implications of the new omicron variant.

The RKI figures bring Germany's total number of dead from COVID-19 to 101,790. The last time a higher daily figure was recorded was on February 20, when it was 490.

While the number of deaths is much lower than it was at its peak, the current number of infections at present is considerably higher.

Experts have attributed the lower death-to-infection ratio to the benefits of vaccination, which can protect against the most severe manifestations of the disease.

Although fatalities rose, the nationwide seven-day incidence rate fell for the second time in a row — to 442.9 people, from 452.2 people on Tuesday.

Germany's federal and regional governments on Tuesday agreed they would take action to counter the fourth wave of COVID-19.

Already criticized by scientists and medics for acting too late, the leaders are expected to decide on the new measures on Thursday. Chancellor-designate Olaf Scholz has said he will back a proposal to mandate COVID vaccinations for everybody next year.

Planned measures include ramping up the vaccination campaign and restricting contact, especially for unvaccinated people.

Meanwhile, 4 people in the southern German state of Baden-Württemberg have tested positive for the omicron variant, despite having been fully vaccinated against coronavirus.

Three of the infected people returned from a business trip to South Africa on November 26 and 27, the state public health office said. The fourth is a family member of one of the returnees.

"All four people are fully vaccinated. A mutation analysis carried out by the state health office has confirmed that all of them are infected with the new variant of concern," the office said in a statement. All four were said to be in quarantine.