Angela Merkel is in quarantine! But that in itself is nothing to worry about. It’s not as if Germany has suddenly become a rudderless ship. Nor will it be rendered leaderless if the chancellor tests positive for COVID-19. In the best case scenario, Merkel can continue in charge of government as long as she feels up to it. In the event that she becomes too ill to work, her cabinet would continue to function without her. There are plans for such an event, too.

Article 69 of the Basic Law, or constitution, features a simple sentence: "The federal chancellor nominates a minister from the cabinet as deputy." Currently, that deputy is Finance Minister Olaf Scholz. The Social Democrat also stands in for the chancellor when she is in full health but absent. A typical example would be an official visit abroad. In such cases, the vice chancellor chairs cabinet meetings, which usually take place on Wednesdays.

Read more: Follow the latest developments in our rolling coverage

"Vice chancellor" is an unofficial term that is not mentioned in the Basic Law. The expression has made its way into everyday usage however, what’s meant though is "deputy." In theory, Merkel could have nominated someone from her own party, the Christian Democratic Union (CDU) or its Bavarian sister party, the Christian Social Union (CSU). In practice, however, the deputy chancellor always comes from the second-largest party in the governing coalition. At the moment, that is the Social Democratic Party (SPD), to which Olaf Scholz belongs.

Read more: Emergencies, disasters, curfews: Who decides what in Germany? 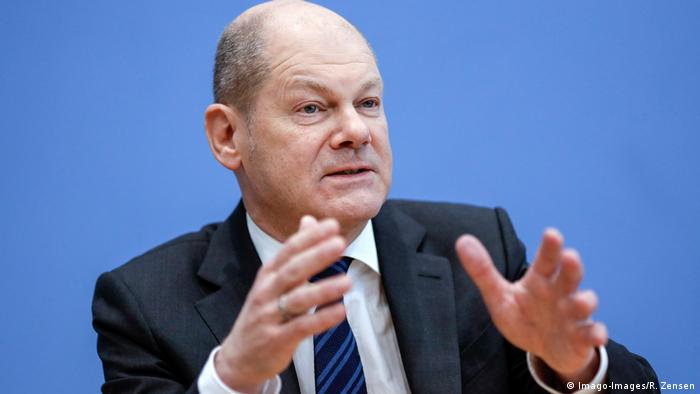 The possibility that the finance minister could stand in for the quarantined chancellor for weeks or even months is also covered by Paragraph 8 of the German government’s standing orders. In the event that the chancellor is "generally prevented from performing her duties," Scholz would represent his boss "in all areas of government." In this case, however, Merkel is entitled to determine the extent to which he may deputize.

All other cabinet members have deputies

There are also contingency plans for the not-so-unlikely case — given the rapid spread of coronavirus — that both the chancellor and her deputy are out of action at the same time. Each cabinet member has his or her own deputy.

In the event that Olaf Scholz could not carry out his duties, he would be represented by the economics minister, Peter Altmaier (CDU).

Such a development would be a first in the history of the Federal Republic of Germany. No chancellor has ever been unable to conduct the business of government for a significant length of time.

Germany has implemented drastic restrictions on public and social life, as the country tackles the coronavirus pandemic. But it appears some states think they have better plans in place. (22.03.2020)

With cities around the world on partial or total coronavirus lockdown, delivery services have become a lifeline for customers. But delivery workers are raising alarms, as Amien Essif reports. (23.03.2020)

The absence of real sport has seen the digital arena suddenly pose an interesting alternative to fans missing sport. What does the arrival of this virtual world of sport mean? (22.03.2020)