Opinion: The shock of coronavirus

The rising number of victims in the COVID-19 pandemic is shocking Europe, much as the Lisbon earthquake did 265 years ago. The world is being reminded of death and facing some tough questions, says DW's Christoph Strack. 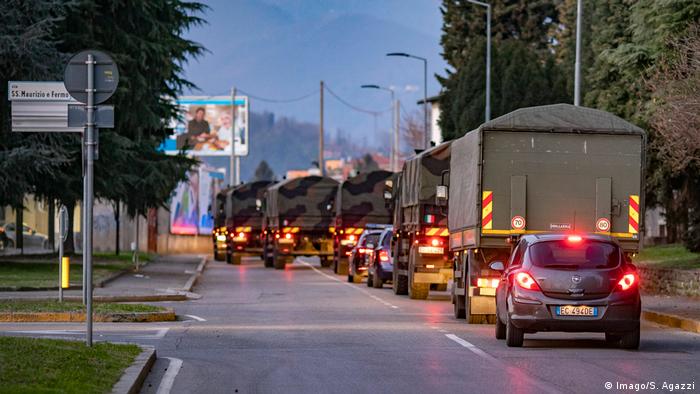 The pictures from northern Italy are appalling. They make an uncanny impression: military vehicles transporting coffins with victims of the coronavirus epidemic away from Bergamo, ground zero for the horrors experienced in recent days. Some of them are driving hundreds of kilometers to other cities, because the local crematorium can no longer manage all the dead. Even death has overstrained the region.

Day after day, new, dreadful victim statistics come from Italy: 427, 627, 793. Day after day, hundreds of lives that have perished. Entire old-age care homes have been emptied by death; villages in the valleys of the Alpine foothills have been decimated. Doctors and carers have died, as have dozens of priests who stayed at bedsides. Death is raging in a country that is a summer idyll for many Europeans. And those Europeans sense or fear that this death will move further afield. What is happening in Italy is like a portent.

Read more: Emergencies, disasters, curfews: Who decides what in Germany?

Italy is fighting a deadly struggle; Europe and the world are shocked and fearful. We are seeing media images and experiencing things ourselves that we would have thought completely impossible just one or two weeks ago. There are few historical comparisons that come to mind, but one of them is the tsunami in Southeast Asia in 2004, with its at least 230,000 victims.

Perhaps the Lisbon earthquake of 1755, with its death toll of some 60,000 people, is also comparable by virtue of how eerie that event seemed at the time. Although the world continued its path toward modernity in the aftermath, the belief in progress was gone; the optimism of that era gave way to despair. The question of "Why?" tormented many forever after. Lisbon was an epochal turning point for many historians, philosophers, literary scholars and theologians.

And as people did in 1755, we today will also have to take stock of ourselves, of our principles and the things we considered self-evident up to now, of our notions of solidarity, of our limits. And anyone who speaks of these horrors as being a divine punishment is reverting to mere tradition — indeed, to fundamentalism.

The military trucks in the Italian night create an image that is hard to shake off. Everyone is horrified. And it is understandable that Italian doctors and German politicians say similar things: #StayHome! #FlattenTheCurve! Make space for each other! Put a freeze on your everyday life! Delay the infections! The images and scenes we see serve as a warning: Take these appeals seriously! They are right. And they are the most important things for as long as medicine remains helpless.

But all this talk quickly distracts from the drama itself (which, as no one is ready to deny, can follow a similar path in Spain or any other European country, in Iran or the US). Death has arrived among us. That death that we in the West have pushed into the background in an era without limits, an era of golden facades and ever-new records.

Read more: Where did coronavirus come from? How long does it last on surfaces? Your questions answered

The memory will haunt us

The army trucks evoke the fact that here is a country that seems to be at war against an invisible enemy. And many of the victims of that war are the old and the weak. People who know life in Italy think of friendly, open faces full of joy and life, and of history, sometimes painful history. Even the smallest village there has its cemetery and celebrates death and remembrance both in a religious and a family context. Now, people are dying and being buried alone, with barely their names mentioned. The memory — if the coronavirus crisis ever passes — will haunt the country with a pain that may even be unbearable. And, depending on how things turn out, this memory will haunt all of Europe.

The statistics: 427, 627, 793. Each of them an essential life. Things will go on like this, in many countries, for weeks. We will have to bear it together and protect one another together. We must relearn the value of life. We sense that when there is talk these days of jobs deemed "essential," sometimes in a medical, sometimes in an economic regard. Carers, doctors, bakers, shop assistants — these are people whose lives are essential, but whose jobs are often jeopardized by the free-market apostles. We shouldn't forget this during and after the shock this world is undergoing at present.

Blinken outlines new US policy for sub-Saharan Africa 2h ago