What are Germany′s new coronavirus social distancing rules? | Germany | News and in-depth reporting from Berlin and beyond | DW | 22.03.2020

Germany has implemented drastic restrictions on public and social life, as the country tackles the coronavirus pandemic. But it appears some states think they have better plans in place. 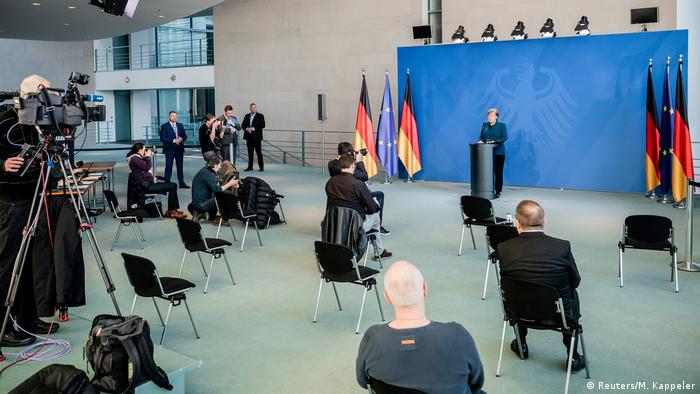 German Chancellor Angela Merkel announced on Sunday a nine-point plan to be implemented nationwide in a bid to stop the spread of coronavirus.

The measures were announced following a telephone meeting with the head of Germany's 16 states.

Infections from COVID-19 in Germany rose to 23,974 on Sunday, with 92 deaths, according to Johns Hopkins University.

Read more: Where did coronavirus come from? How long does it last on surfaces? Your questions answered

The stricter measures follow an appeal made by Merkel last week asking people in Germany to stick to guidelines.

"This is my urgent appeal to the few who have struggled to follow the rules. Please let's all pull together to do what's right for our country. Show sense and heart," she said during Sunday's announcement.

How will the new rules be implemented?

Germany operates as a federal system, with Merkel herself calling the measures "guidelines."

Bavaria already implemented a state-wide lockdown before Merkel announced Sunday's measures. According to DPA news agency, the state will not carry out the state guidelines, banning meetings of more than two people.

Rhineland-Palatinate plans to enact a far-reaching ban on contact. It is not known for how many people.

In Saxony, from Monday onwards, there will be movement restrictions in place. Leaving the house will only be permitted in certain circumstances.

North Rhine-Westphalia announced it would be implementing the two-person ban, as advised by Merkel on Sunday. Laschet said there will be fines of up to €25,000 ($27,000) for those breaking the rules, and not keeping the advised 2-meter distance between people.