What can Pakistan offer Saudi Arabia in Yemen crisis? | Asia| An in-depth look at news from across the continent | DW | 23.04.2015

What can Pakistan offer Saudi Arabia in Yemen crisis?

Pakistan's civilian and military leaders are once again visiting Saudi Arabia to discuss the Yemen crisis. Since the Saudi airstrikes against Yemen's Shiite rebels have already halted, what can they now offer to Riyadh? 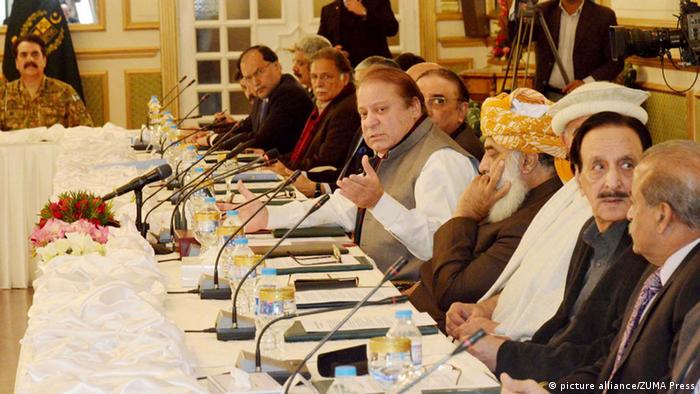 Pakistani Prime Minister Nawaz Sharif is visiting Saudi Arabia for the second time in less than a month. He departed for Riyadh on Thursday, April 23, along with the country's army chief, Raheel Sharif, and a host of high-level civilian and military officials. The purpose of this latest visit is to reassure the Saudi authorities that Islamabad remains fully committed to the Arabian country's security, says Pakistan's Dawn newspaper, citing a government source.

Saudi Arabia, which is one of Pakistan's biggest financers, is unhappy with Islamabad's reluctance to join the coalition against Yemen's Houthi rebels, who are allegedly backed by Saudi Arabia's regional rival, Iran. The Arab kingdom carried out a month-long campaign of airstrikes against the Shiite rebels, who have taken over swathes of territory in Riyadh's southern neighborhood, raising concerns in Riyadh about a potential Shiite uprising in the kingdom. Saudi Arabia also fears that Iran is working to increase its influence in the region.

On Wednesday, April 22, Saudi Arabia announced it was halting the strikes, but analysts say the Sunni-Shiite confrontation in Yemen is not going to end soon.

Earlier this month, Riyadh formally asked for Pakistani combat planes, warships and soldiers, according to Defense Minister Khawaja Asif Asif. But on April 7, the South Asian country's lawmakers voted to remain neutral in the conflict, albeit PM Sharif later clarified in a televised speech that in case of an aggression against Saudi Arabia, Pakistan would take Riyadh's side.

But since the Saudi-led airstrikes in Yemen have already ceased, what kind of support can the visiting Pakistani officials offer now to Saudi King Salman bin Abdul Aziz? Foreign relations experts say that Pakistan's support is still needed in the Yemen conflict, even if it is merely diplomatic and logistic.

"The Saudis were particularly perturbed over not physically seeing Pakistanis on their side. This visit will address that perception and convey to the regional actors in the clearest terms that Pakistan stands by Saudi Arabia," a Pakistani diplomat told the media, adding that the joint visit by PM Sharif and General Sharif carried a lot of symbolism as well.

Pakistan's local media also claims that the two sides could come up with a deal that could serve as "a consolation for not joining the Saudi-led military coalition," adding that the parliamentary resolution has a lot of room for interpretation.

"Pakistani rulers want to show their loyalty to the kingdom, and they know the Arabs are not too pleased with Islamabad's ambiguous stance on Yemen," Sulehria told DW. 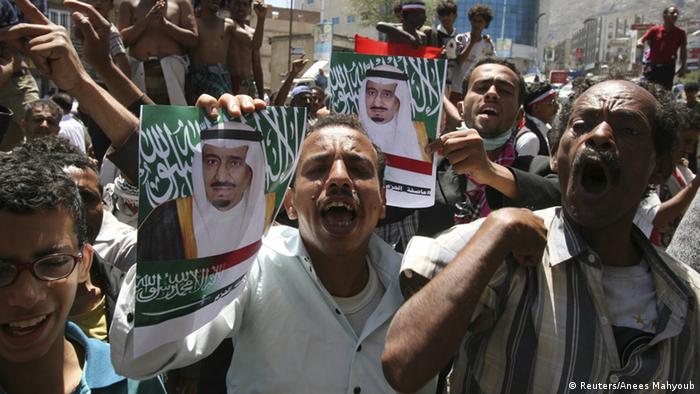 What is Pakistan's interest in Yemen, which is not even its neighbor?

The expert also said that Pakistan's economic dependence on the Arabian country was a reason behind Sharif's repeated visits to the Middle Eastern country. "Latest figures show that the largest sum of Pakistan's foreign exchange comes from Saudi Arabia. There is a mammoth work force of Pakistani laborers in the Arab countries. It would be 'suicidal' to offend the Saudis."

A Pakistani analyst based in the UK told DW on condition of anonymity that Pakistan already had troops in Saudi Arabia in an assisting role. The reason why Pakistan's army chief is accompanying Sharif represents the military's intentions to sell Pakistani weapons to the Arab leaders and to test the locally-manufactured drones and missiles in Yemen, said the analyst.

"Pakistan should not get involved in the Saudi Arabia-Iran regional rivalry," Musharraf Zaidi, an Islamabad-based foreign policy expert, told DW. "We must not forget that Riyadh and Tehran have their own interests, therefore the Pakistani government, too, should do what is best for the country.

It must keep good relations with both Saudi Arabia and Iran," he added. 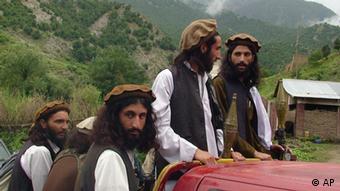 The sectarian Shiite-Sunni strife in Pakistan is already on the rise, with militant Islamist groups unleashing terror on the minority Shiite groups in many parts of the country. Most of these outfits, including the Taliban, take inspiration from the hard-line Saudi-Wahabi Islamic ideology. Political observers say that Iran, too, is backing a number of Shiite factions, some of which are heavily armed.

"For Pakistan's Islamic fundamentalists, the country is already a 'Sunni Wall' against Shiite Iran," Siegfried O. Wolf, an expert at the University of Heidelberg's South Asia Institute, told DW. "The policy of containing the Shiite influence in the region was seriously affected after the collapse of the Sunni-Taliban regime in Afghanistan in 2001 and the subsequent overthrow of Saddam Hussein's government in Iraq. These events created a power vacuum which is now being increasingly filled by Tehran. Saudi Arabia does not want to see the rise of Iran and will continue to do anything to ensure Sunni dominance," he added.