Werner Schulz: ′Russia is only hurting itself′ | Europe| News and current affairs from around the continent | DW | 04.03.2014

EU parliamentarian Werner Schulz calls for a tough response to Russia’s actions in Ukraine. He says the EU could put economic pressure on Russia, which is already feeling the economic consequences of the invasion. 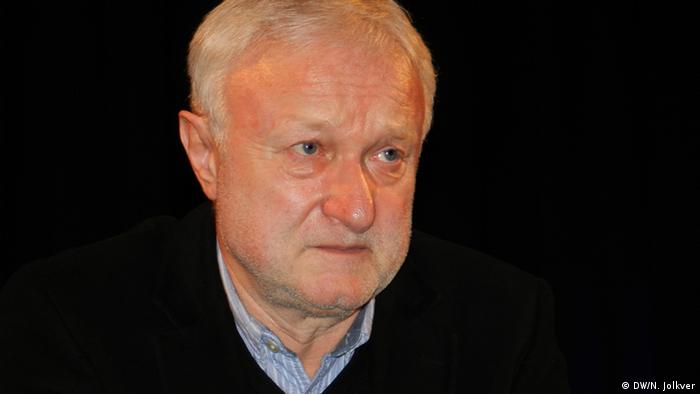 DW: Mr. Schulz, the situation in Ukraine's Crimea region is escalating dramatically. What is your assessment of the current situation?

Werner Schulz: The situation reminds me more of the year 1914 than of the 21st century. I didn't think it was possible that we would find ourselves in such a dangerous place again, that such a dangerous and volatile situation would come about through military escalation.

But the political culture is vastly different to that of 1914. Europe has learned to solve crises peacefully. Doesn't that make you hopeful that there will also be a peaceful solution for current events in Ukraine?

On one side is the EU, which has learned from the events of 1914 and stands for a different approach today, which eases my mind somewhat. But on the other side there is Russia, which hasn't learned anything from its colonial history and the wars of the last century.

The method we are witnessing is reminiscent of [former Soviet leader Leonid] Brezhnev. In 1968 there was the "cry for help" from the Czech Communists which the Soviet Union used to justify its invasion of Prague. And in 1979 there was supposedly a cry for help from Afghanistan, and in 2008 from South Ossetia. Personally, I had no illusions as to what former KGB Lieutenant-Colonel Putin is capable of. When he said, "We are one nation" in reference to Ukraine, that was not the familiar call for reunification as we experienced it in East Germany - he was staking a neo-colonial territorial claim. For Putin, the dissolution of the Soviet Union was the biggest geopolitical catastrophe of the 20th century - not World War I, World War II, or the Holocaust. He is trying by any means possible, obviously also aggressively and militarily, to bring together some sort of Eurasian Union - a kind of reconstruction of the Soviet Union.

What is your opinion of the argument that Russia is simply using very forceful means to protect its natural interests?

Russia cannot have any interests in Ukraine. There can be Russian interests with regard to Ukraine; there can be an interest in good relations with Ukraine. It was a major concession and a serious political mistake to extend the contract with the Russian Black Sea fleet in Crimea by 25 years, until 2042. There is normally no reason to station troops on foreign territory like this.

There was a memorandum in Budapest in 1994, signed by Russia as well as the US, France, and Britain, which granted Ukraine full governmental territorial control and integrity in return for destroying all the nuclear weapons on its territory. That means: Ukraine disarmed, and in return was given a guarantee that the country's borders were internationally recognized as they were at the time - also by Russia. So what's happening right now is a violation of the 1994 memorandum.

The NATO member states have been meeting to discuss the issue. What possibilities does the defence alliance have for influencing Russia?

There are several ways and means outside the realm of military intervention, because we don't want a war. We have been committed to a politics of peace for decades, so we will attempt everything that can be achieved through diplomatic talks. There is also a series of sanctions that can be imposed on Russia. But one thing is especially important, as we saw from the example of the Baltic Soviet republics: Latvia, Lithuania and Estonia were far more interested in becoming members of NATO than of the EU. Ukraine applied for NATO membership, and the US supported the application, but some European countries, including Germany, opted to postpone. Ukraine's only protection would be for it to be admitted to NATO as swiftly and urgently as possible. I believe the Ukrainian parliament is already calling for such a resolution.

I also think that Putin has shot himself in the foot. Other states like Moldova and Georgia will now quickly seek to join a military alliance that will guarantee them their territorial integrity.

To what extent could decisive conduct towards Russia by the West persuade Putin to back down?

Knowing the "Homo Sovieticus" and KGB agent Putin, it's the only language he understands. That is: a counter-threat, and real protection for these states. To date, the only thing that has really made him furious was the extension of NATO. He actually said: What is the eastward extension of NATO compared to the westward expansion of Gazprom? We permitted the westward extension of Gazprom; we've allowed ourselves to become dependent on Russia, this strategic commodity power. The only effective instrument, ultimately, is the guarantee of assistance. It is entirely acceptable under international law for these countries to have a guarantee that their territorial integrity will be respected. And that will also show Russia where the boundary lies.

You talked about steps NATO could take. What methods does the EU have of influencing Putin?

There are many EU sanctions. Currently the EU is still holding back because it still hopes to be able to reach an understanding with Putin. I personally don't believe in that. But altogether the EU has a variety of instruments. It could, for instance, put the cooperation agreement that was due to be resumed on hold. It could also block the lifting of visa restrictions that Russia is so keen to achieve. Another thing it could do is impose travel restrictions on the officials responsible for this military action. A whole series of pinpricks. We are, however, a "soft power."

But I believe Russia is only hurting itself. The Russian stock exchange is in turmoil; investors too will hold back. Economically speaking the events will damage Russia. And the loss of trust is immense - we can't even begin to appreciate it right now. On top of that, Putin will probably face resistance within his own country. Russians are also starting to become aware of the nasty propaganda coming out of the Kremlin, and to realize that they've been duped. Facts have completely been distorted. No one has been threatened in Crimea or in eastern Ukraine.

Werner Gustav Schulz has been a member of the European Parliament for Germany's Green party since 2009. From 1990 until 2005, the former East German civil rights activist was a representative in the German Bundestag..

European Union foreign ministers have met again in Brussels to discuss the crisis in Ukraine. It threatens to escalate into war between Ukraine and Russia, but the EU is reluctant to impose sanctions. (03.03.2014)

The US is alarmed by Russia's military intervention in Ukraine. In a phone conversation with the Russian president, US President Barack Obama did not mince words. But what remains for America beyond rhetoric? (03.03.2014)