′We are scapegoating′ Mesut Özil, says Berlin integration chief | Germany | News and in-depth reporting from Berlin and beyond | DW | 24.07.2018

Berlin Commissioner for Integration and Migration Andreas Germershausen told DW that the German soccer star leaving the national team due to 'racism and disrespect' points to a frightening trend in German society. 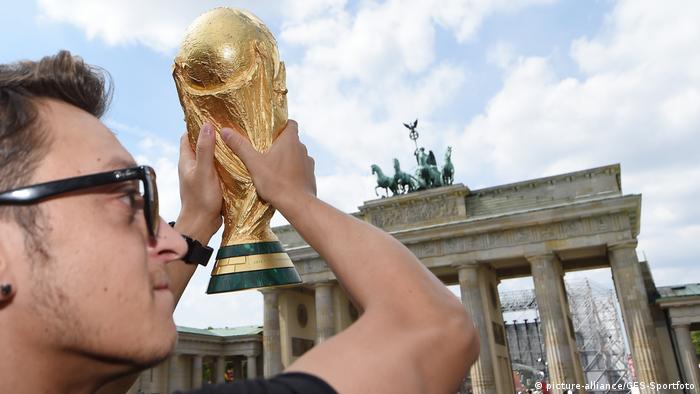 Deutsche Welle: What are your thoughts on Mesut Özil's three-part statement announcing his retirement from German national soccer?

DW: What is a good way to react?

The example is the soccer team itself. Looking back to 2010 and 2014, the German soccer team presented a Germany of diversity. It was very clear that Mesut Özil, İlkay Gündoğan or Miroslav Klose... belonged to us. That was Germany, and they were fighting together and they were winning together. Chancellor Angela Merkel was proudly presenting herself with Özil. The issue is, now that the team is not successful, we're observing two things: The understanding that this diversity is kind of breaking up, and, more so, we are scapegoating an immigrant. We are interpreting a person, a very good soccer player, who was a German in 2014 with a Turkish background, and now we are scapegoating him for the failure of the team. And that is most problematic. What we need to do is reinvent the understanding of 2014: That Germany is winning because of diversity.

There used to be a lot of racism in German soccer, and I was frightened by how quickly the aggressive, racist attitudes among fans, even politicans, were revived in 2018, and we again had this more racist understanding of soccer. Whereas in 2010 and 2014, the German Football Association (DFB) had seen itself as standing for diversity — and even for same-sex relations. So there was a kind of a modernization of the DFB. Now, it's not only the [World Cup] failure. It's a question of whether the DFB stands firmly behind a positive attitude, which is necessary because you have this populist, even racist, attitude among fans and even politicians.

DW: Do you see a connection between this renewed uptick in racism and the arrival of Reinhard Grindel as DFB president?

Yes, it definitely plays a role. He had a negative approach to multiculturalism... as a more conservative politician, but I don't usually like to identify people for eternity with prior negative approaches. So I actually thought he would take up a more positive approach in the DFB, maybe following up what Theo Zwanziger had introduced. I gave him a chance and now he has, in my view, done a poor job, and he needs to improve.

DW: Should he step down?

It's not my place to say that. If he continues, he should really reinterpret his activities over the last two months.

DW: Is the problem with racism contained to the DFB, or is this a wider issue in society?

It's a social problem in general. I also saw this at [World Cup] public viewings. The negative reactions by fans were very strong against Özil and [Ilkay] Gündoğan. So this is not just a question of the DFB, but the whole discourse around the Erdogan picture was a very negative discourse against Mr. Özil and Mr. Gündoğan. The negative feelings were actually what was so frightening. In 2010 and 2014, Mr. Özil was one of the prime examples of successful integration, and it frightens me how quickly such a fundamental thing has eroded. And this is a problem we also need to address as participation and integration politicians and administration.

DW: What concrete role do you play to that end?

It's two main things: One, offering opportunities for participation in all fields. So we work towards employing more immigrants in public bodies. Also education, improving education that transfers to job perspectives, including for those who've come here recently [i.e. as] refugees. The administration is also changing. On the [Berlin] senate level, there's agreement on the need to develop a more positive approach to immigrants. We've been fairly successful in the last few years in that regard.

The other thing is offering areas of participation to immigrants themselves. We're not designing policies for them, but designing policies together with them — asking them for their consultation, what they're in need of. In practice, many things have improved and changed for the better. In reality, the situation is better than what we've been discussing due to debates around Mr. Özil.

DW: ...who, by the way, isn't an immigrant who needs to be integrated. He was born in Germany.

As I said, our institutions need to change. We need to understand the value of integration and participation. A person like Mr. Özil, we still call him an immigrant despite the fact that he was born here. But our policies also include those of the second generation because many of them still have difficulties. So they are also the target group we are addressing when improving education, professional training and transfer to the labor market.

DW: Özil spoke about having 'two hearts' — one for Germany and one for Turkey. Is this possible in Germany?

DW: That would mean forcing a non-EU citizen to give up his or her original citizenship.

For full participation you should be a German citizen. Then you have the right to vote... If you're living in Germany, I would ask for most of those who have been here longer than 10 years to acquire German citizenship.

DW: So if you were German chancellor, you would allow dual citizenship for everyone?

We should loosen the regulations. We should be more relaxed — not for everyone, but for those who have lived here for a certain period of time.

DW: Then they could keep their first citizenship?

That would be my position.

DW: But, in reality, that's not possible right now. So what do you tell foreigners who want to become Germans, but have to give up their home citizenship?

Well, ok. Then you should acquire German citizenship. I would be in favor of that.

DW: Even without dual citizenship?

DW: What grade, with 1 being "excellent" and "6" being "terrible," would you give Germany's efforts to embrace diversity?

Despite the negative developments over the last two or three years in political discourse, I would give a much better grade than, for example, around the year 2000. Over the last 20 years, German society has opened up quite fundamentally... Five years back, I would have given a 2, but now I would reduce it to 3.

Andreas Germershausen is the Commissioner of the Berlin Senate for Integration and Migration. He has held the position since 2015.