The Bauhaus mastermind was 85 years old when he agreed to design a new residency for the German ambassador in Buenos Aires. It was one of his last projects and among his best. The only problem — it never got built.

The little-known story about the Argentine residence is an intricate one, complete with political intrigue and abandoned designs. It also offers a glimpse of how rigorously the Bauhaus "master of collaboration" Walter Gropius worked right up to his death, how unafraid he was to use other people's ideas and drafting skills as part of his teamwork methodology, and why, despite a major professional shortcoming — his inability to draw — he is considered one of the greatest architects of modern times.

After fleeing Nazi Germany in 1934 because of his "un-German" work and spending three years in Britain, Gropius went to Cambridge, Massachusetts, where he was offered to chair Harvard's Graduate School of Design. The move would shape the trajectory of modern architecture in the US. Later, at the age of 63, he joined The Architects Collaborative (TAC), an architecture firm adjacent to the campus.

Gropius' impact on both institutions bore the stamp of his Bauhaus past — the revolutionary, multidisciplinary school he established after the First World War as an original contribution to modernism, and the developing International Style of architecture.

It's an architectural legacy which, in addition to the centennial of the Bauhaus school's founding, is being celebrated at Harvard throughout July with a series of lectures and a presentation of nearly 200 works by 74 artists. The series also touches on some of Gropius' other grand architectural projects.

In December 1968, William Roesner, a resident architect and graduate of the Massachusetts Institute of Technology (MIT), joined TAC, one of the top addresses for architects in the US at the time. In collaboration with Gropius, he was immediately put to work on a design for a German ambassador residency in the Argentine capital. 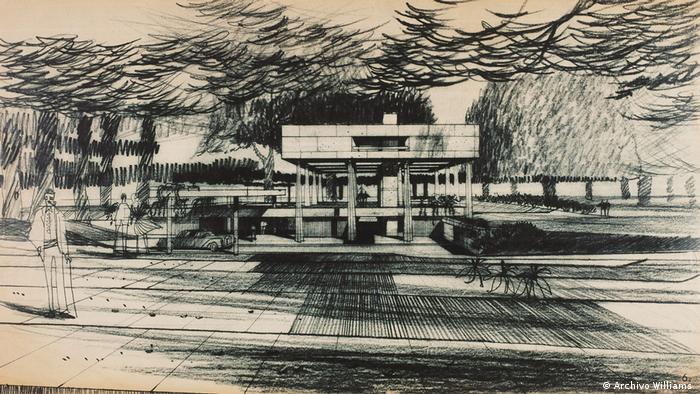 Roesner's first design of the ambassador's residence featured 16 slender columns, but it would be rejected

But there were problems. The German government's plan to build the new residence at Plaza Alemania faced growing resistance from the Buenos Aires mayor and city council members, who were worried about a large structure obstructing the view of the surrounding wooded park. Roesner's task was to come up with a low-visibility design, following the efforts of a colleague whose designs were shelved for being too prominent and obstructive.

His initial draft of a green-roofed subterranean facility with lightwells drew a tepid response from Gropius. "We don't want a bunker," the maestro told Roesner politely, in the deep German accent he maintained throughout life. "We need to put the house in the trees."

Yet it was Argentine politics, not design philosophy, that increasingly preoccupied Gropius and ultimately threatened the project. And what the battle-worn architect didn't need so late in life was more politics.

The problem dated back to 1964 when German President Heinrich Lübcke and Argentinian President Arturo Illia agreed to swap a small mansion owned by the German government for a larger, more representative site at Plaza Alemania in the Palermo district of Buenos Aires. Two years later, however, Illia was ousted by General Juan Carlos Onganía in a military coup, and the residence plans were put on hold.

Amid the political upheaval, the Argentine architect Amancio Williams approached Gropius about partnering on the residency, believing the collaboration would improve his chance of winning the contract. Gropius declined, citing a heavy work load and extensive travel.

At the time, he was busy designing Baghdad University, in many ways his most ambitious project, and his Bauhaus Archiv in Berlin. Gropius' earlier experience with a military coup in Iraq may have triggered his reluctance as well.

Only after the German government approached him in 1968 did he agree to take the job, in collaboration with Williams. In November that year, Gropius and his close associate, Alexander Cvijanovic, spent two weeks in Buenos Aires pouring over ideas for the residency with their Argentine collaborator. 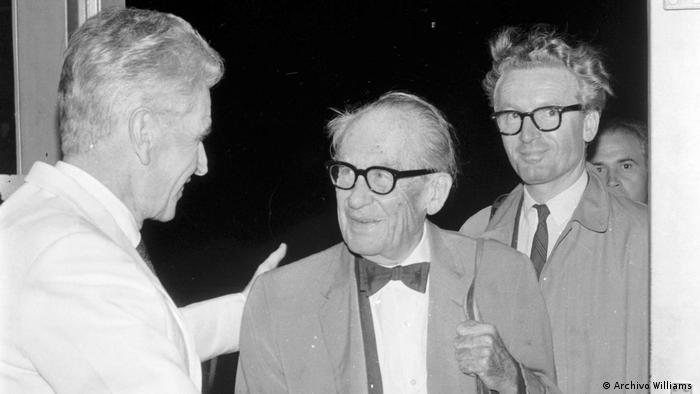 Back at the drawing board, Roesner began designing a structure with the living quarters perched on 16 slender 10-meter pillars, and the reception facility tucked below ground level to offer an extended view of the park. It was a process of continuous tweaks. Gropius would meet Roesner at his desk for 10-to-15-minute consultations about once a week over a four-month period.

"I would jump up, he would take my seat and I would stand on his left side," Roesner recalls. "He usually had a cigar, and I can remember standing in clouds of smoke as he pointed with his finger at the changes he wanted. He verbalized his ideas; there was never any doodling." 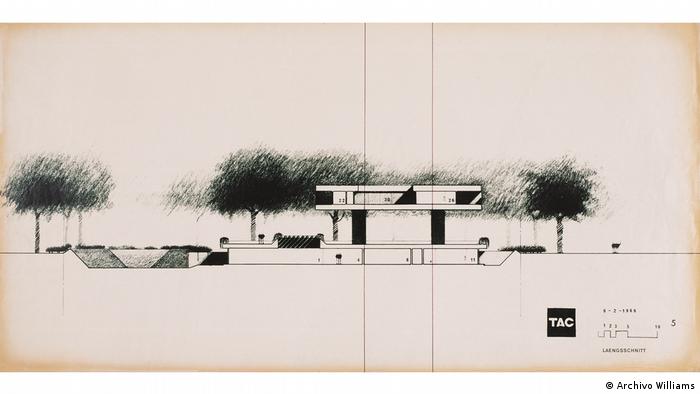 'I cannot draw a straight line'

Which brings us to Gropius' limited drawing skills. That weakness already worried him while working alongside Mies van der Rohe und later Le Corbusier in his first job in the Berlin office of pioneering modernist architect, Peter Behrens.

In a letter to his mother Meldina, which Gropius gave to his biographer Reginald Isaacs, he wrote: "My total inability to draw the simplest thing on paper is very discouraging and I often look with sorrow on my future profession. I cannot draw a straight line."

Perhaps out of necessity, he relied early in his career on collaboration, which he then elevated to an art form. It became the running theme of a man of ideas who didn't always have the means to deliver.

Gropius liked Roesner's new sketch but insisted on two substantial changes: four large L-shaped pillars instead of multiple thin columns, and a fascia on the below-ground portion of the building.

"L-shaped columns were an aesthetic call, reflecting the architectural trend toward brutalism at that time. I wanted a more elegant, structural expression," Roesner recalled.

The idea of putting the living quarters in the trees stemmed originally from Williams, who had designed an elevated house spanning a creek on a wooded lot for his father Alberto, a prominent musician and composer.

The final design — a collaboration between Williams, Gropius and Roesner — generated buzz in the press and architect circles. But opposition to developing Plaza Alemania had grown even fiercer by that time. Momentum further dwindled with Gropius' sudden death in July 1969. 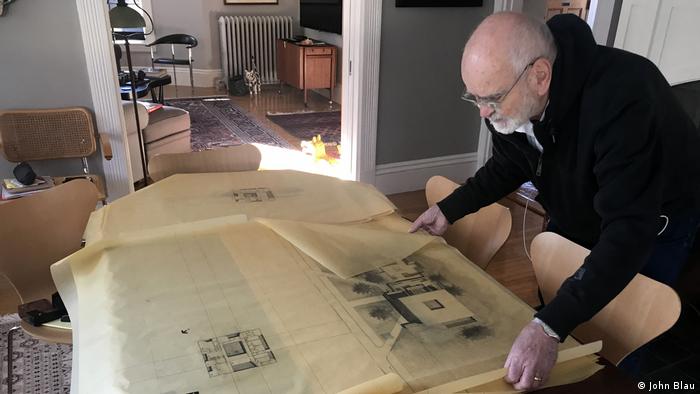 Williams lobbied intensively for the project to move ahead with Alejandro Agustín Lanusse, who became the new Argentinian president in 1971, and who had shown interest.

About a year later, however, the German government abandoned the plan, largely because the new German ambassador, Luitpold Werz, didn't like the elevated modern design.

That ended what Cvijanovic would later claim to be "potentially the most beautiful building to come out of the design leadership of the late Professor Gropius."

The exhibition "The Bauhaus and Harvard" runs through July 28, 2019 at the Special Exhibitions Gallery, Harvard Art Museums, Cambridge, Massachusetts, USA.

Throughout 2019, hundreds of events will celebrate the legacy of the Bauhaus school of design. German President Steinmeier kicked off the centennial by honoring the great minds driving the major cultural movement. (16.01.2019)