100 years of Bauhaus: Myths and misunderstandings

Bauhaus is considered an export hit from Germany. Many who love the famous school of design reduce the fundamental ideas to one bold formula: square, practical, good. Here are eight misunderstandings about Bauhaus.

Germany's Bauhaus architecture is famous around the world for its clarity. The pioneers of a new design concentrated on clear lines, resisted decorative and ornamental elements and celebrated everything that was functional. Most people think they know what is "typically Bauhaus": elegant tubular steel cantilever chairs by Marcel Breuer, the semi-spherical table lamp by Wilhelm Wagenfeld, or the architecture that went down in building history as square and purpose-oriented. Everything bourgeois was declared an enemy.

That is why Walter Gropius also tried to bring craftsmen, honest workers with dirt under their fingernails, to the Bauhaus in Weimar.

And what did the target group think about this anti-bourgeois dogma? They complained about the aesthetic paternalism in their prefabricated chambers in which they were required to live. They were not allowed to hang up curtains, and pictures on the walls were not welcome either. There was no wallpaper, there were no decorations, nor any coziness — just bare white walls. 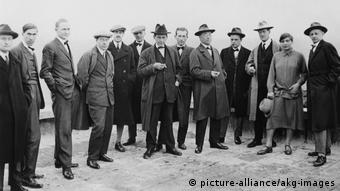 Group picture of the Bauhaus masters, with just one woman: Gunta Stölzl

A space for gender equality

While Bauhaus today is celebrated around the world as having been home to the avant-garde and a melting pot of new forms of thinking, it is often forgotten that it was a fairly patriarchal place.

Still in 1919, the year of its foundation, more women than men were admitted, but only a few of them managed to get a sought-after job as a teacher in the workshop.

Gunta Stölzl was the only master of weaving and gathered together many talented women in her class. Innovative textile artist Anni Albers, who took on the name after marrying Bauhaus artist Josef Albers, also studied with her.

Only a few managed to gain access to other workshops. Marianne Brandt was the only woman to find her way into the metal workshop. There, she helped to shape the metal design of her time.

Johanna Hummel, on the other hand, left the school because she wanted to make money from her own works while she was still a student. 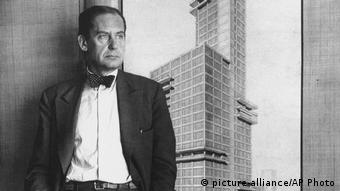 Walter Gropius in 1933, shortly before he emigrated to the US

What remains of Bauhaus?

Nowadays, an idealized image of Bauhaus circulates throughout the world. The think tank is often misunderstood as a style and product rather than as a school that aimed to promote a new form of learning and living.

What has become of the ideas of that time? The notion of a common ideology and self-organized coexistence in manageable, strictly isolated circles has become obsolete. It only worked as long as there was a shared vision as well as a shared image of an enemy. Bauhaus pioneers fought shoulder to shoulder against the attitude toward life of the imperial era before the First World War. Gropius and his colleagues resisted historicizing architecture, as well as the flourishes of the bourgeoisie and figurative painting.

The movement that wanted to create nothing less than a new person is an ideal of the past. Yet building in the Bauhaus style is still a trend in many German cities in the 21st century. This, however, has nothing to do with the utopias of the 1920s. Builders like to use the label to lure financially powerful architecture lovers into purchasing a new radiant white property. Bauhaus for everyone — the dream has long since passed.

The new museum in Dessau is slated for completion in 2019 to mark the 100th anniversary of the Bauhaus art school's founding by Walter Gropius. (05.12.2016)