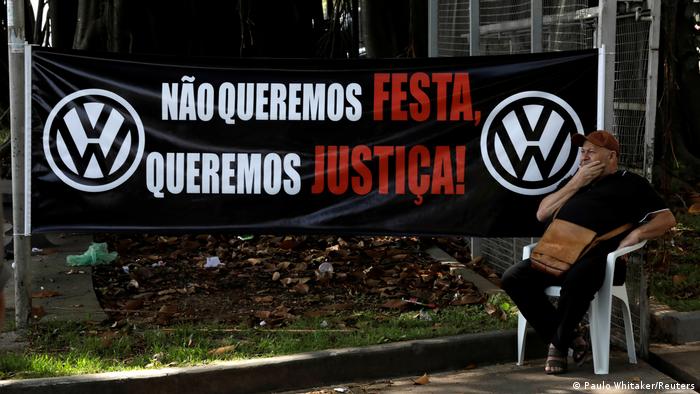 German car manufacturer Volkswagen (VW) announced on Wednesday evening local time that it had signed a deal with prosecutors to compensate Brazilian workers who were affected by the company's collaboration with Brazil's former dictatorship.

"We regret the violations that occurred in the past. For Volkswagen, it is important to deal responsibly with this negative chapter in Brazil's history and promote transparency," VW executive Hiltrud Werner told reporters.

Employees who worked for the company during the military dictatorship, which lasted from 1964 to 1985, took VW to court in 2015 over alleged collaboration between the company's Brazilian security office and the junta.

What does the deal consist of?

In a deal signed with state and federal prosecutors, Volkswagen agreed to pay out 36 million reais (€5.5 million, $6.4 million) in compensation to the workers and their families, as well as various projects including a memorial to victims of the regime.

A representative of the victims, Sebastiao Neto, criticised the agreement saying that VW had only talked to the judiciary and not to the affected workers themselves, he told KNA.

A report published three years prior by historians investigating the activities of the dictatorship revealed that the collaboration consisted of making political arrests on factory premises as well as spying on Volkswagen workers.

Too little, too late for some

The class action lawsuit against the carmaker represents around 60 people. But Neto said it was too late for the worst affected, including Lucio Bellentani who was tortured on the factory premises and died in 2019, age 74.

"Volkswagen is concerned with its image and marketing. The donations to be made are presented by the company as charity and not as compensation for its complicity with the dictatorship. Seen in this light, Volkswagen is getting out of this mess in a clean way," said the victims' representative in a press statement.

Investigations into the regime's crimes

A National Truth Commission that was founded in order to investigate the crimes of the military dictatorship confirmed that at least 434 people were murdered or went missing during that period.

They estimate that around 200,000 people were tortured.

Brazil's current far-right president, Jair Bolsonaro, is an open admirer of the dictatorship having said that the military regime's mistake had been to torture its victims and not kill them.

German companies were indifferent during Brazil's military dictatorship. A shareholders association has urged the captains of industry not to let history repeat itself with presidential candidate Jair Bolsonaro.

Nord Stream 2: Construction of disputed pipeline to restart in December 3h ago

Nigeria: Militants kill dozens in attack on farm 4h ago