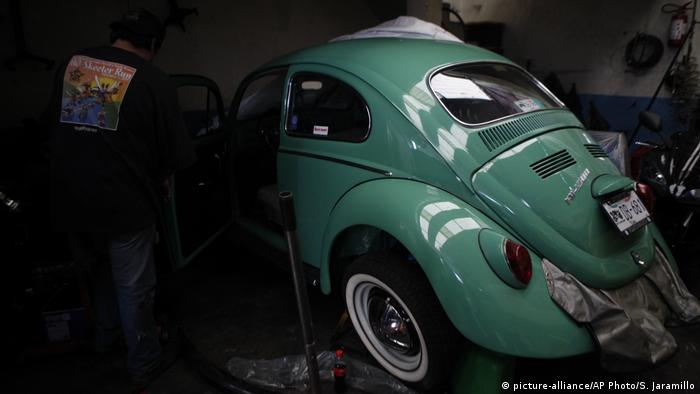 German carmaker Volkswagen (VW) on Tuesday won praise from the Simon Wiesenthal Center, a Jewish advocacy organization, "for having reacted quickly in memory of the victims of Nazi barbarism."

Earlier this week, VW severed ties with a Mexican distributor after an image emerged on display at an affiliated dealership in Mexico of an early VW Beetle alongside Nazi soldiers, seemingly used for promotional purposes.

"We strongly disapprove of [the distributor] showing those images at its facilities, which shows a regime that emphasized hatred and discrimination at a point in history that has fortunately been left behind," VW said in a statement.

A visitor to the facility shared pictures of the image on social media, triggering calls for VW to distance itself from the dealer.

Read more: Hitler and 'his Volkswagen': Tracing the 80-year history of the Beetle

Before VW's announcement of its decision to cut ties, the Simon Wiesenthal Center called on the German automobile maker to "drop the concession completely in order to pass a clear message to your customers that you have learned from your history."

The Beetle was conceived by Ferdinand Porsche under the patronage of Nazi leader Adolf Hitler as "the people's car." Volkswagen was first formed by the German Labor Front, a labor organization of the Nazi party, as a "people's car company" run by the state.

The designs for the Beetle, one of the five top-selling four-wheeled vehicles of all time, were offered to an array of Allied carmakers after the war, all of which turned them down. A British military officer, Ivan Hirst, ultimately secured the fate of the car, which would continue to be built in Wolfsburg. He had been put in charge of winding the factory down, but came across the blueprints and instead convinced military superiors to order tens of thousands of units for occupying troops as affordable and easily built transportation.

VW has received praise for actively confronting its Nazi past.

Read more: The family calls the shots at VW

Mexican president under fire for comparing Jewish analyst with Hitler 01.07.2022

Mexican President Manuel Lopez Obrador has angered the Jewish community by comparing a prominent member to Hitler. It's not the first time the leftist leader has tried to smear opponents with such comparisons.