Vital lakes disappearing around the world | Environment | All topics from climate change to conservation | DW | 03.02.2017

Water scarcity is a growing problem worldwide, with Africa being hit particularly hard. As temperatures soar and rainfall drops, vital lakes are drying up. We take a look at some of the most startling vanishing acts. 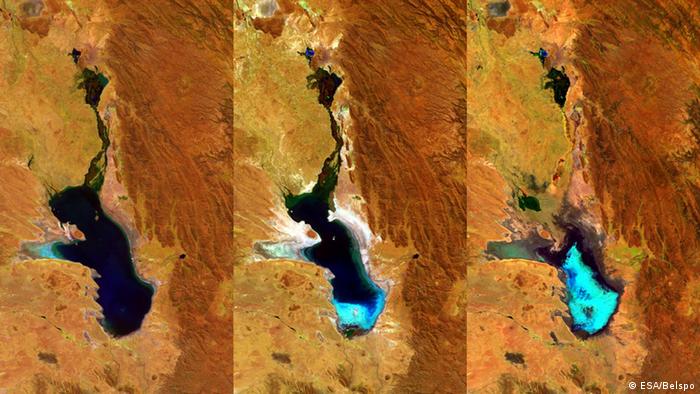 Empty fishing boats sit on the cracked, scorched floor of  Bolivia's once mighty Lake Poopó. The lake has been on a continuous decline for years, but at the beginning of 2016, it dried up almost completely, spelling disaster for wildlife and families dependent on it for fishing.

The lake has always been shallow and subject to fluctuation. But scientists believe this time it may not recover. Climate change is part of the problem. Rainfall has steadily decreased and temperatures have increased by 2 degrees Celsius over the last three decades, a factor worsened by El Nino, say scientists.

But this is also a man-made disaster. Water from the river feeding the lake is diverted for agriculture, as well as silver and tin mines in the region.

Lake Chad was once one of the largest lakes in the world. For centuries, it's been a vital source of food and water for the surrounding communities. But it's vanishing at an astonishing rate. Since the 1960s, decreased from around 25,000 square kilometers to 1,350 square kilometers, which is equivalent to a country roughly the size of Belize in South America disappearing. It is now a patchwork of weeds, ponds and islands.

What was once fertile land around the lake is now dust. Agriculture and fish stocks have collapsed. Around 30 million people in countries, including Chad, Cameroon, Niger and Nigeria, depend on these waters and the lake's vanishing act has plunged the basin into  a food and malnourishment crisis "on an epic scale," according to aid agencies.

Large and unsustainable irrigation projects, diverting water from the lake and the Chari and Logone rivers are part of the problem. Between 1983 and 1994, irrigation in the area had increased four-fold, according to the United Nations Environment Programme. But soaring temperatures and decreased rainfall due to climate change are to blame too.

The Dead Sea is a lake fed by the River Jordan and though it has no connection to the ocean, it is so salty that nothing but microbes can survive there. It's also a favorite with bathers and holidaymakers who visit the area, which borders Israel, the West Bank and Jordan, for its curative properties and to float effortlessly on its surface.

The lake has survived for thousands of years because the water evaporating from it and flowing into it has remained relatively stable. But that equilibrium has been disturbed with the growth of the region's population. Water is now being diverted to supply people's homes and also for use in the water-intensive potash and chemical sector. It's now declining by around a meter a year and could disappear completely if measures are not taken. 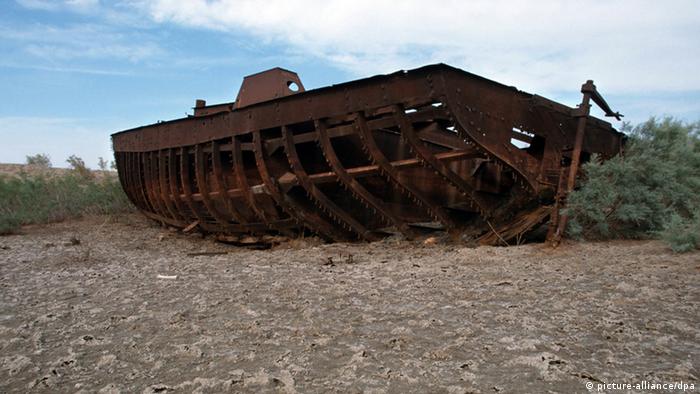 Rusting hulks rise up out of the sand as ghostly monuments to what was once a lively and prosperous fishing port. Mo'ynoq in Uzbekistan's had tens of thousands of residents at its peak and sat on the shores of the Aral Sea. Now the Aral, which at one time was the world's fourth largest lake, is over a hundred kilometes away, and the city's thriving fishing and canning industry has collapsed.

The lake has been  steadily shrinking since the 1970s. Water that had flowed into the Aral was diverted to irrigate Uzbekistan's burgeoning cotton sector, as part of the Soviet plant to turn Central Asia into the world's largest producer of cotton. For a time the country exported more cotton than anywhere else. But the diversion, along with hydropower plants and reservoirs, has taken its toll. It's been an environmental disaster for the people living around the lake and for wildlife too.