Venezuelans flee to Peru as UN warns of a 'crisis moment'

Thousands of Venezuelans fleeing an economic and humanitarian crisis streamed across Peru's border ahead of tighter controls. The UN said the situation is nearing a "crisis moment" like in the Mediterranean. 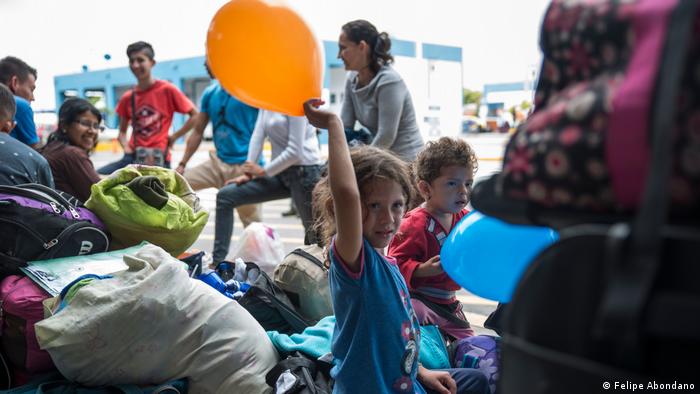 Previously, Peru allowed Venezuelans to enter if they were carrying a passport or an identity card, but as of Saturday an ID card is no longer acceptable. The policy change sent a surge of Venezuelans across the border, trying to beat the deadline.

Peru has already taken in nearly 400,000 Venezuelan immigrants, most of them during the past year.

To date, 80 percent have entered Peru with a passport, while 20 percent crossed with only an identity card, according to migration data.

The new regulations prompted Ecuador to open a "humanitarian corridor" to the Peruvian border, with 35 busloads on the way, Ecuadoran Interior Minister Mauro Toscanini said Friday.

Tens of thousands of Venezuelans seeking to enter Peru are at risk of being stranded in Ecuador and Colombia, which are already struggling to cope with the heavy migrant burden.

Some migrants are trying to join family in Peru and other countries.

Eduardo Sevilla, Peru's top immigration official, said parents with children seeking to join the rest of their family, pregnant women and the ill will be exempt from the passport requirement.

Last week, Ecuador implemented a passport entry requirement as well, only to reverse the decision on Friday.

Colombia's migration director, Christian Kruger, has said he was "worried about the consequences" of any tighter border controls by his country's two southern neighbors.

"Asking for a passport isn't going to stop migration, because they're leaving their country not out of choice but out of necessity," he said.

Around half of the estimated million Venezuelans who have fled to neighboring Colombia in the past 15 months entered with passports, while the other half entered with identity cards only, according to Kruger.

More than 2.3 million of Venezuela's 30.6 million population have fled the country since 2014, with 90 percent leaving to other Latin American countries, according to the UN. Colombia, Peru, Ecuador and Brazil have been hit hardest.

On Friday, the UN's migration agency warned that the outflow of economic and political migrants was "building to a crisis moment that we've seen in other parts of the world, particularly in the Mediterranean."

"We recognize the growing challenges associated with the large-scale arrival of Venezuelans. It remains critical that any new measures continue to allow those in need of international protection to access safety and seek asylum," UN High Commissioner for Refugees Filippo Grandi said Thursday.

Oil-rich Venezuela is in the fourth year of an economic downward spiral under President Nicolas Maduro, with double-digit contraction in gross domestic product, industrial production collapse and inflation estimated to hit 1 million percent his year.

Venezuela is in the middle of an economic meltdown, facing chronic inflation and an acute shortage of essential goods. The government wants to tackle the situation by raising fuel prices. But that could prove tricky. (17.08.2018)

Venezuela: What can a bolivar buy?

The Venezuelan currency has become near-worthless due to a spiraling hyperinflation. Reuters photographer Carlos Garcia Rawlins found a unique way to show how many bolivars one must carry for grocery shopping in Caracas. (20.08.2018)