The charges came as the Maduro government blamed Washington for causing the worst blackout in Venezuela's recent history. Tareck El Aissami is the most senior figure within Maduro's government to be targeted by the US. 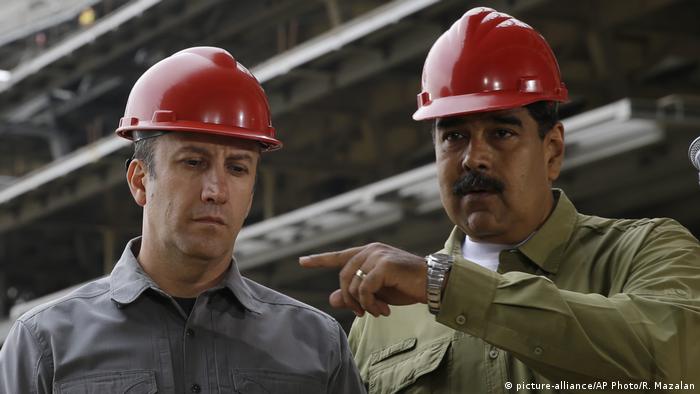 A federal court in New York has charged former Venezuelan Vice President Tareck El Aissami (top photo, left) with violating US sanctions. The US had imposed sanctions on El Aissami and other Venezuelan officials for their alleged role in drug trafficking in 2017.

The move comes as tensions between the US and Venezuela are at their highest point, with Washington backing self-declared interim President Juan Guaido in the opposition's struggle against acting President Nicolas Maduro.

El Aissami is the most senior figure within Maduro's government to be targeted by the US. The former vice president, who currently serves as minister of industry and national production, and his business associate Samark Jose Lopez Bello were each charged with five criminal counts for violating the federal Foreign Narcotics Kingpin Designation Act.

Both men have been labeled a "Specially Designated Narcotics Trafficker" under the Kingpin Act. If convicted of all charges, El Aissami and Lopez Bello would each face up to 150 years in prison.

Friday's announcement came as the Maduro regime was grappling with a massive blackout that left most of the country in the dark a day earlier. Though power outages are now commonplace in Venezuela, Thursday's blackout was said to be the worst to hit the country in recent memory.

Neither Socialist Party officials nor state power company Corpoelec provided an update on the situation, but state-sponsored broadcaster Telesur reported that power was beginning to be restored across the country and in parts of the capital, Caracas.

According to local media, the blackout had a crippling effect on Caracas' already overburdened hospitals, suspending surgeries and treatment of patients. Some patients in critical condition reportedly died as a result.

Guaido has criticized the government for mismanaging the country's energy supply, while Maduro blamed the power outage on the US and the opposition. The embattled acting president said the massive blackout was planned and an act of "sabotage."

Government officials said the massive Guri Dam, which supplies 80 percent of the country's electricity, was the source of the power outage. The government said the dam was damaged by a cyberattack.

"We will once again defeat this electrical sabotage. We are going to recover this important service for the population," Vice President Delcy Rodriguez said on state television.

Communications Minister Jorge Rodriguez said Maduro's government planned to bring "proof" of US involvement in the blackout to a UN Human Rights envoy who is set to visit the country in the coming days.

'Time is running out for Maduro'

Foreign Minister Heiko Maas has said Germany's support for Maduro's rival, Juan Guaido, won't be affected by actions against Berlin's ambassador to Venezuela. For the time being, the diplomat is headed back to Germany. (07.03.2019)