The Trump administration has slapped sanctions on Venezuela's new vice president, placing him on its narcotics "kingpin" list. Tareck El Aissami is the most senior Venezuelan official to be targeted by the US.

Venezuelan President Nicolas Maduro has appointed Tareck El Aissami, a former interior minister, as his No. 2. El Aissami could find himself leading the ailing country amid opposition plans to oust Maduro from office. (05.01.2017)

Venezuela's President Nicolas Maduro has overseen military exercises, claiming the country is under threat of invasion. The US has extended an executive order declaring a national emergency in the South American state. (15.01.2017)

Venezuela's opposition-led legislature has passed a resolution aimed at triggering early elections. The latest move to oust President Maduro is likely to be blocked by the Supreme Court. (10.01.2017)

An opposition leader has blamed the government for not releasing political prisoners and allowing a referendum on the presidency. But the ruling Socialists have also expressed concern that the talks are going no where. (07.12.2016)

El Aissami was designated for sanctions under the Foreign Narcotics Kingpin Designation Act, the US Treasury Department announced on its website.

The Treasury Department accused El Aissami of facilitating and overseeing large shipments of drugs from Venezuela to Mexico and the United States while serving as the country's interior minister.

The US government also issued sanctions against Samark Lopez, a Venezuelan businessman who is believed to be El Aissami's front man.

As a result of the actions, 13 companies owned or controlled by Lopez will be blocked and both men's US-held assets will be frozen

Monday's sanctions freeze the assets of 13 companies owned or controlled by Lopez. They also ban US citizens from doing business with either men or the listed companies. Additionally, Lopez and El Aissami are barred from entering the United States.

El Aissami had long been targeted by US law enforcement officials for his alleged ties to Walid Makled as well as to a Middle Eastern militant group. During his tenure as interior minister, dozens of fraudulent Venezuelan passports were uncovered in the Middle East, including some held by alleged Hezbollah members.

The sanctions were the result of a multiyear investigation to target drug traffickers in Venezuela, John Smith, the acting director of the US's Office of Foreign Assets Control, said in a statement. 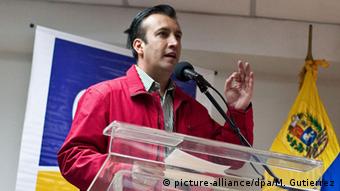 A former Obama administration official told the Associated Press that the move to levy sanctions against El Aissami was held up last year at the request of the State Department. At the time, they feared that the decision would interfere with Vatican-backed talks between the government and the opposition.

"This was an overdue step to ratchet up pressure on the Venezuelan regime and signal that top officials will suffer consequences if they continue to engage in massive corruption, abuse human rights and dismantle democracy," said Mark Feierstein, who was Obama's top national security adviser on Latin America.

Last Wednesday, 34 Republican and Democratic members of Congress sent a letter to US President Donald Trump asking his administration to sanction Venezuelan officials, including El Aissami.

Senior US officials took care to emphasize that the sanctions were related to a criminal investigation and not political, diplomatic or economic.

Nevertheless, the sanctions are bound to increase tensions between the United States and its harshest critic in Latin America. The countries have not stationed ambassadors in one another since 2010.