Venezuela's capital, Caracas, was reportedly left in total darkness for more than four hours as commuters headed home from work. Acting President Nicolas Maduro blamed the US of orchestrating the blackout. 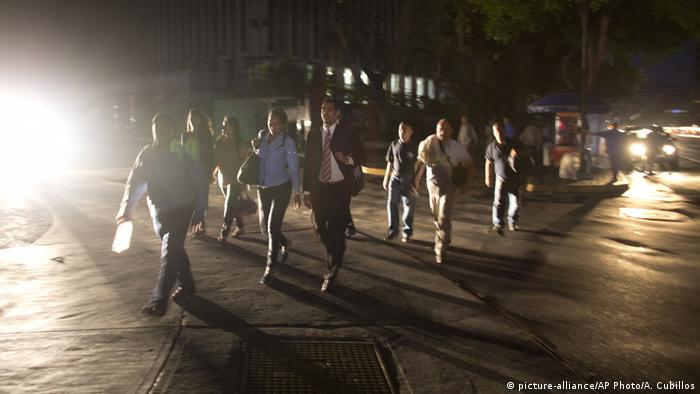 Most of Venezuela was plunged into darkness Thursday evening, as a result of a massive power outage. The blackout was one of the largest to occur in the beleaguered nation, where electricity shortages are already common.

The power outage began in the early evening, just as commuters were leaving work, leading to chaos on the streets of Caracas. Subway services were interrupted, flooding the streets with people. That excacerbated traffic jams caused by inoperable stoplights.

As night fell, frustrated citizens across the city took to their windows to bang pots and pans in protest. Internet and telephone services were also wiped out, leaving residents with only cellphone data service.

The country's Guri Dam, the backbone of Venezuela's electrical grid, is said to be where the failure originated. Critics of acting President Nicolas Maduro's regime have said that mismanagement and a lack of investment is to blame for chronic grid problems.

Self-declared interim President Juan Guaido tweeted at 11 p.m. local time that 22 Venezuelan states and the capital of Caracas had been without power for six hours. "Chaos, concern and indignation. This blackout demonstrates the inefficiency of the usurper," he wrote, referencing Maduro.

But Venezuela's government has said that international and political adversaries are the ones responsible for power failures. "The war on electricity, already announced and directed by US imperialism against our people, will be defeated," Maduro wrote on Twitter.

Communications Minister Jorge Rodriguez denounced a "sabotage" of "criminal intent" from "those who persist in their intention to hurt the Venezuelan people."

The minister said the blackout was part of a plan to leave Venezuela without power for several days, but that after "heroic efforts," the government was able to restore electricity to the eastern part of the country.

"We tell Marco Rubio, that you have failed again," Rodriguez said, accusing the US Senator of leading efforts to intervene in Venezuela.

Rubio mocked the accusation on his Twitter account, calling Rodriguez "the Baghdad Bob of Caracas," a reference to Mohammed Saeed al-Sahhaf, former information minister of Iraq and a top figure in Sadam Hussein's regime.

US Secretary of State Mike Pompeo shot back at the accusation of US involvement in the blackout, tweeting that "power shortages and starvation are the result of the Maduro regime's incompetence."

The massive power outage comes as Venezuela is already suffering from hyperinflation, projected to reach 10 million percent this year, and is grappling with food and medical shortages.

'Time is running out for Maduro'

Venezuela's Juan Guaido calls for own envoy in Berlin

Juan Guaido has asked Germany to endorse his choice for Venezuelan ambassador to Berlin. The move is part of the self-declared interim president's plan to unseat acting leader Nicolas Maduro and form a new government. (07.03.2019)

Venezuelan President Nicolas Maduro and his Iranian counterpart, Ebrahim Raisi, made the announcement at a joint press conference in Tehran. The two allies have both been heavily hit by US sanctions.