The Central Bank of Venezuela's new notes were launched as hyperinflation and US sanctions continue to cripple the economy of the oil-producing nation. As inflation skyrockets, the biggest bill is worth just 52 cents. 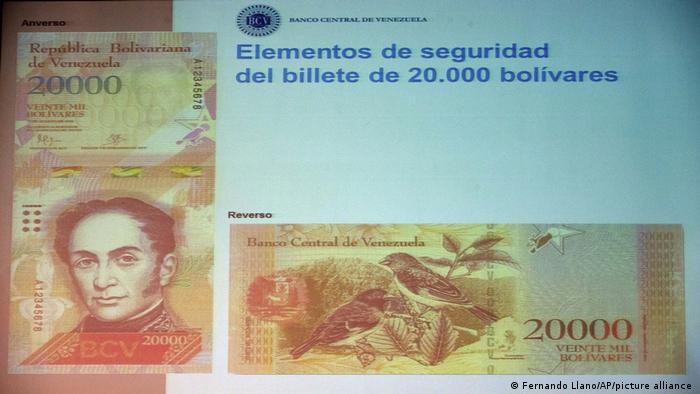 The Central Bank of Venezuela (BCV) announced Friday the introduction of three new banknotes: 200,000, 500,000 and one million bolivars.

But with inflation skyrocketing, the highest denominated bill has a value of just $0.52 cents (€0.44 cents), according to the official rate.

But even the highest valued is worth only about $0.02 cents at current exchange rates.

Why even use paper money?

The new bills will begin to circulate "gradually" beginning Monday, according to a brief message from the BCV.

Over the last few years, various Venezuelan governments have turned to printing new banknotes at different denominations as a way to get ahead of spiraling inflation.

"These new bills will complement and optimize the current denominations, to meet the requirements of the national economy," the central bank said in a statement.

But with interannual inflation rates running at 2,665% as of January, according to the central bank, the use of Venezuelan paper money has almost completely disappeared in favor of cards.

For the most part, prices in Venezuela are denominated in US currency, when stores show it.

Why is Venezuela's economy struggling?

For the past seven years, sanctions imposed by the United States, European Union and other nations on gold mining, state-owned oil operations and other business transactions have battered the South American country.

The US also does not recognize the government led by President Nicolas Maduro, the successor to former President Hugo Chavez.

The nation's situation has been worsened by falling oil prices and restrictions on sales of domestically refined oil.