Venezuela rounds up US oil bosses after Guaido meets Trump 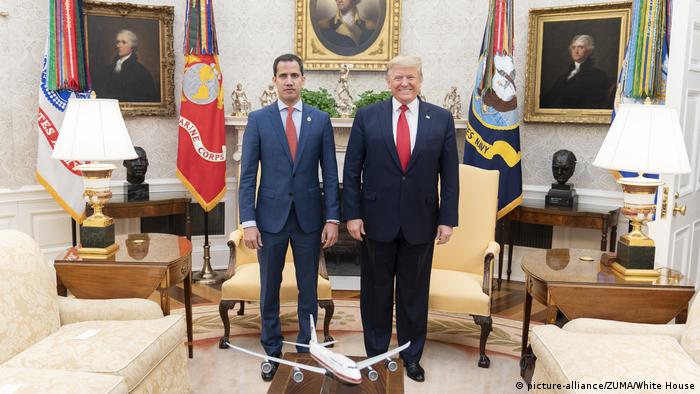 Six US oil executives were abruptly taken by police in Caracas on Wednesday, just hours after opposition leader Juan Guaido met with President Donald Trump, their attorneys and families said. The six men are executives of US refiner Citgo and were under house arrest.

They were awaiting trial on corruption charges. Prosecutors have accused them of engaging in corruption by benefiting from a proposed, though never executed, plan to refinance Citgo bonds through offering a 50% stake in the company as collateral.

But many believe the six executives, five of whom are naturalized US citizens, are being used political bargaining chips by Nicolas Maduro's regime, as relations between the US and Venezuela have soured.

They were arrested in 2017, after being lured to Caracas by officials of Venezuelan state oil firm PDVSA, Citgo's parent company, to attend a work meeting. The men spent two years in a prison of Venezuela's intelligence agency Sebin until later last year, they were transferred to house arrest.

Veronica Vadell Weggeman, daughter of one of the executives, wrote on Twitter that her father was taken without warning.

Carlos Anez, one of the executives' stepson, said he was told the men were being taken to Venezuela's intelligence agency Sebin for medical exams, but that they have not heard from them since.

"Police came to the apartment, told my father that they had to take him, to bring a change of clothes, they took his GPS off his ankle and took him away," Anez said.

"At this time we know that they are in the Helicoide (Sebin headquarters), all together in the same cell, even though the house arrest has not been revoked by the court," said Jesus Loreto, one of the men's lawyers.

Hours before the men were taken, Venezuela's opposition leader Juan Guaido was in Washington, where he attended Trump's State of the Union address and later visited the Oval Office.

While the executives were in prison, Juan Guaido entered into a political clash with Nicolas Maduro, leading months-long protests and garnering the support of 50 nations for his unsuccessful bid to dislodge Maduro from power.

Among these efforts was Guaido's move to take control of Houston-based Citgo and name a new company board, after Washington recognized him as the country's legitimate president.

Maduro blasted both Guaido and Trump shortly after the two met.

"Trump offends and disrespects the Venezuelan people by proffering violent threats against its integrity and against the constitutional, legitimate and democratic government of President Nicolas Maduro," Foreign Minister Jorge Arreaza told reporters in Caracas.

In a separate statement, Maduro's regime said Guaido was a traitor, denouncing the "shameful complicity of those dedicated to selling their homeland for humiliating crumbs tossed to them by their boss, Mr Trump."

Juan Guaido, who has been recognized as interim president of Venezuela by about 50 countries, is currently in Europe. Opposition lawmakers said that agents from the country's SEBIN intelligence unit raided his offices. (22.01.2020)

The president painted a rosy picture of the US economy and global role. He appeared to snub a top Democrat, though he lavished praise on his international guest, Venezuela's opposition leader Juan Guaido. (05.02.2020)