US Secretary of State Mike Pompeo has promised more sanctions against the embattled government of Venezuelan leader Nicolas Maduro. Neighboring countries are set to demand a firm response to Maduro's aid blockade.

International condemnation of acting President Nicolas Maduro grew on Sunday, a day after he deployed troops to block foreign aid convoys amassing at the country's border with Brazil and Colombia.

Commenting on the clashes between soldiers and activists trying to deliver food and other emergency supplies into Venezuela, US Secretary of State Mike Pompeo said Washington would continue to pressure Maduro until he understood his days were "numbered."

Pompeo blamed the border violence on armed loyalists known as "colectivos," and told CNN that more sanctions were an option.

Pompeo said Washington would seek "other ways" to get food aid to Venezuelans after Maduro shut the borders leading to violence that saw two people killed and 300 others injured.

Humanitarian aid has become the centerpiece of the standoff between Maduro and opposition leader Juan Guaido, who declared himself interim president a month ago.

Although the country has become mired in poverty as a result of a prolonged recession and hyperinflation, Maduro claims the aid is a smoke screen for a US invasion.

He refuses to step aside and let Guaido take power, despite the 35-year-old being recognized by most Western nations and Venezuela's neighbors as the country's legitimate leader. 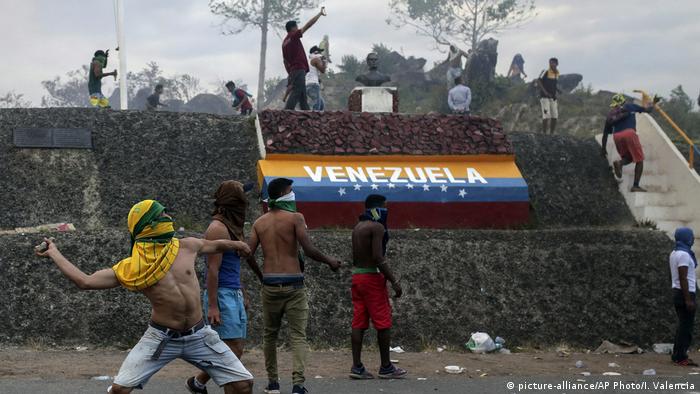 The head of the United Nations human rights agency, Michelle Bachelet, has denounced the government's "excessive use of force."

"These are disgraceful scenes," she said Sunday. "The Venezuelan government must stop its forces from using excessive force against unarmed protesters and ordinary citizens."

UN Secretary-General Antonio Guterres called on both sides to reduce tensions and avoid any further escalation, his spokesman said.

The European Union's foreign policy chief, Federica Mogherini, also criticized the use of "irregular armed groups to intimidate civilians and lawmakers who have mobilized to distribute assistance."

She said the EU was prepared to "scale up" humanitarian and development aid.

Brazil's Foreign Minister Ernesto Araujo also hit out at Saturday's bloody violence, describing it as "a criminal act committed by the Maduro regime."

Colombian President Ivan Duque, meanwhile, denounced the "barbarity and violence" at his country's border, where hundreds of volunteers attempted to offload aid trucks and carry them into their poverty-stricken neighbor.

Duque said a summit of regional governments in Bogota on Monday would discuss "how to tighten the diplomatic siege of the dictatorship in Venezuela."

Maduro severed diplomatic relations with Colombia on Saturday over the aid trucks standoff and gave its diplomats 24 hours to leave the country.

Guaido, meanwhile, urged foreign powers to consider "all options" in ousting Maduro, ahead of Monday's talks, where he is also due to meet US Vice President Mike Pence.

On Saturday, trucks laden with food and medicine repeatedly attempted to push past lines of troops on the Colombian border but were met with tear gas and rubber rounds. Two of the aid trucks went up in flames.

Colombian immigration authorities said more than 100 Venezuelan soldiers had deserted and crossed into the country.

Officials in the Brazilian border state of Roraima said Sunday that the number of Venezuelans being treated for gunshot wounds had risen to 18. Armed men launched gun battles in the Venezuelan border town of Santa Elena on Saturday, where aid trucks also gathered.

Venezuelan President Nicolas Maduro and opposition leader Juan Guaido are vying for control of the country. DW takes you through the key events since Guaido declared himself acting president. (30.01.2019)