Envoys loyal to Venezuela's interim president have taken control of diplomatic buildings and a consulate. Caracas has severed ties with the US, accusing it of staging a coup against acting President Maduro. 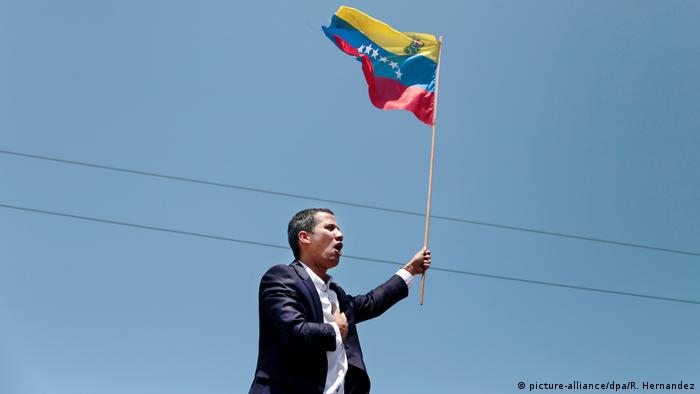 Envoys of Venezuelan opposition leader Juan Guaido on Monday took control of several diplomatic properties in the US.

Venezuela's acting president, Nicolas Maduro, has cut ties diplomatic ties with the US, accusing it of attempting to oust him from power. Guaido, who invoked Venezuela's constitution and declared himself interim president, has pushed Western countries to isolate Maduro's regime.

Read more:How millions of 'dirty dollars' were laundered out of Venezuela

Guaido said his representatives had taken control of the diplomatic properties to "strengthen bilateral relations (with the US) and better serve the Venezuelan community in the country."

The US State Department said Washington was "pleased to support these requests."

The Venezuelan Foreign Ministry called on the US to "take the necessary measures to immediately reverse this forcible occupation."

Guaido's US envoy, Carlos Vecchio, said that 12 out of 55 staff members at the diplomatic properties decided to remain in the US, throwing their support behind Guaido.

Earlier this year, Venezuela's military attache to the US became one of the first military officials to recognize Guaido. Many more have followed in his footsteps. Up to 1,000 members of Venezuela's security and armed forces have fled to the Colombia since February, according to Bogota.

In January, then-opposition lawmaker Guaido declared himself president of Venezuela in a stunning move that undermined Maduro's authority in the country.

The US immediately recognized him as the legitimate president of the oil-rich, cash-strapped country. Shortly after, Germany and other Western countries recognized him. But Maduro's regime continues to enjoy support from countries such as Russia, China and Turkey.