Vegan restaurants run by cult leader who ′speaks to God′ | Germany| News and in-depth reporting from Berlin and beyond | DW | 13.08.2018

Vegan restaurants run by cult leader who 'speaks to God'

A millionaire businesswoman whose followers call her "Supreme Master" is behind a global chain of popular vegan cafes, including four in Germany. No one knows how Ching Hai amassed her vast fortune. 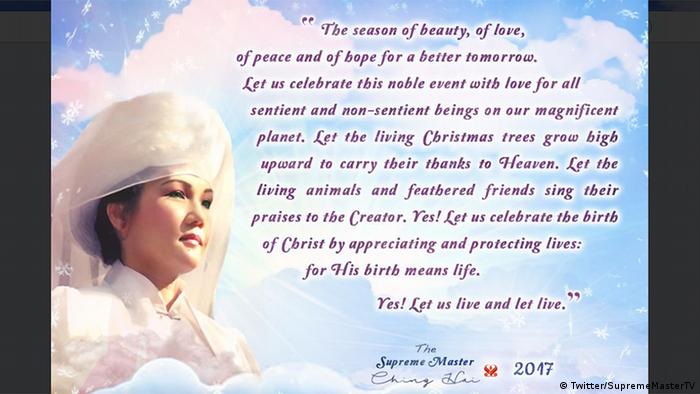 In just four years, vegan restaurant Loving Hut has opened more than 200 locations in the United States, Austria, Germany, Australia and South America, which makes it the biggest vegan chain worldwide. Its founder, known asChing Hai, has more than 500,000 followers (by some counts up to 2 million) who believe she has direct conversations with God and call her Supreme Master.

With thousands of videos on YouTube showing spiritual lectures going back to the 1990s, Ching Hai preaches all over the world to acolytes of a meditation-based philosophy she has dubbed Quan Yin. Wearing colorful outfits and sitting on outlandish sets with one or two favored followers, Ching Hai mixes Christianity, Buddhism, Judaism, Hinduism and Islam to instruct her believers in how they can achieve higher levels of consciousness and also speak directly to God. She claims to be the next "master" following in the likes of Jesus, Buddha, and Mohammed.

In the lectures, she also reminds her adherents that they should not be ashamed of making money, "people will make you feel guilty about making money…it's none of their business."

She also sometimes advocates something called breatharianism, which is a denial of food and water in favor of spiritual "sustenance." The practice, sometimes associated with older religions, has been tied to numerous dehydration and starvation deaths.

Born Hue Dang Trinh in Vietnam in 1950, Ching Hai came to Germany in the early 1970s after she met and married a German scientist. In the following decades, she founded Supreme Master Ching Hai International, selling jewelry and clothing and books authored by Hai.

The company also produces content for Supreme Master Television, which is usually played on large screens at Loving Hut locations, in which Hai, photoshopped onto glowing and sparkly backgrounds, recites aphorisms about time travel and different dimensions.

Ching Hai, who also goes by Celestia De Lamour in the US where she is now based, has been described by the media as a cult leader for decades, and according to Humanewatch.org "inspires feverish adoration like a kind of deity-cum-rock star."

She has also run afoul of the authorities on several occasions. In 1996, $640,000 (€562,000 at today's rate) she donated to the presidential campaign of Bill Clinton was returned for being of "suspicious" origin, and her business has been targeted by Taiwanese authorities for illegally transferring funds in and out of the country.

In China, a group of her followers was accused of using an electronics company as a front for recruiting Quan Yin members and organizing initiation rituals. And according to University of Oxford political scientist Patricia Thorton, the origin of Ching Hai's vast fortune is unknown.

However, unlike practices used at better-known cults, Ching Hai does not seem to be calling on her followers to cut themselves off from their friends and family nor hustling them for their money. According to her website, her lectures, which are attended by hundreds of devotees, are free of charge.

Loving Hut has four locations in Germany: two in Hamburg, one in Hanover and one in Lüneburg. Their offices declined DW's request for a comment. 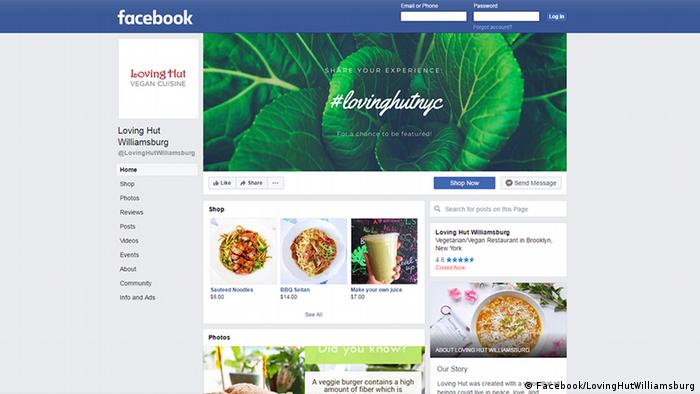 A second person this week has been given a suspended prison term for condoning terrorism in France. With the country still mourning the victims of an attack last week, the vegan's Facebook post triggered indignation. (30.03.2018)