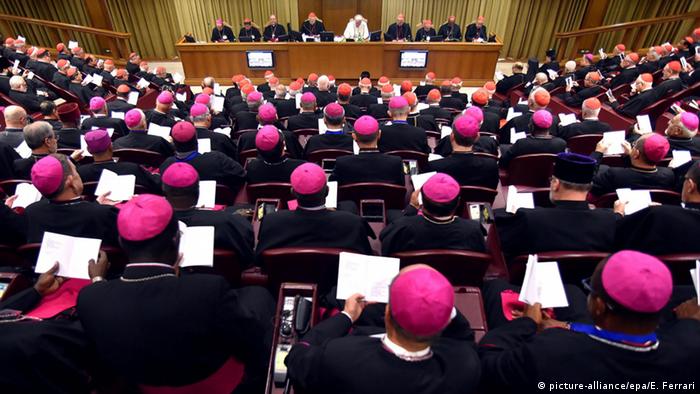 The Vatican's orthodoxy office announced on Monday that the Roman Catholic Church could not bless same-sex relationships, in a statement approved by Pope Francis.

The statement came from the Congregation for the Doctrine of the Faith (CDF) in response to a question about the church's power to bless same-sex unions.

"Negative" was the reply, signed by Cardinal Luis Ladaria, who heads the CDF, which was founded in the Middle Ages — in the year 1542 — to combat heresy.

Ladaria said it was not possible because, despite "positive elements," God could not "bless sin."

The decree comes less than a week after the EU declared itself an LGBTQ+ "freedom zone" in the face of rising homophobic policies in predominantly Catholic countries such as Poland.

Catholic Church refuses to give its blessing

The official response went on to claim that that which is blessed needs to be "objectively and positively ordered to receive and express grace, according to the designs of God inscribed in creation, and fully revealed by Christ the Lord."

"For this reason, it is not licit to impart a blessing on relationships, or partnerships, even stable, that involve sexual activity outside of marriage (i.e., outside the indissoluble union of a man and a woman open in itself to the transmission of life), as is the case of the unions between persons of the same sex," the statement read.

Aiming for a moderate tone, the CDF wrote that "positive elements exist within the context of a union not ordered to the creator's plan".

Nevertheless, the statement claimed that while the Vatican's deity "never ceases to bless each of His pilgrim children in this world ... He does not and cannot bless sin."

The Vatican holds its position

Pope Francis has taken a more progressive approach toward LGBTQ+ communities than his predecessors, with a now-famous quote about gay people trying to live a Christian life: "Who am I to judge?"

The Catholic Church remains of the position that marriage is strictly between a man and a woman, although the pope has expressed support for same-sex civil unions.

A decree in 2003 tried to ride a similar line, calling for the respectful treatment of gay people, but saying the church "cannot lead in any way to approval of homosexual behavior or to legal recognition of homosexual unions.''

An influential cardinal in Germany made headlines recently for blocking the publication of a report on sexual abuse against minors by members of the church in his diocese.