The main differences between Catholics and Protestants | Culture | Arts, music and lifestyle reporting from Germany | DW | 21.04.2019 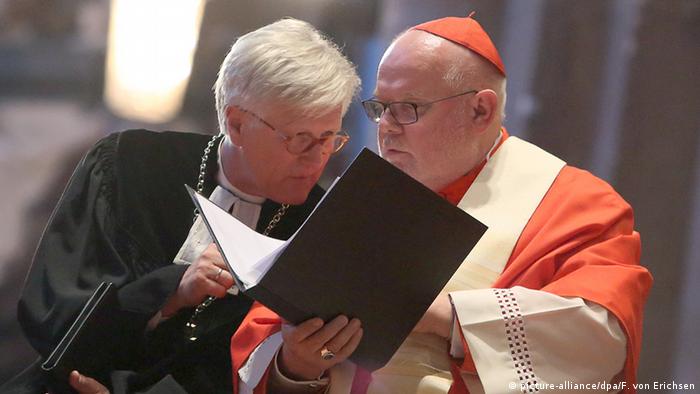 In Germany, the country of the Reformation, a deep animosity divided Catholic and Protestant Christians up until a few decades ago. This division had deepened over the centuries through religious conflicts and wars.

Germany and the church

It all started when Reformation took place, 500 years ago, as Martin Luther (1483-1546) tried to reform the Catholic Church. His attempt to do so instead led to a schism in the church.

On October 31, 1517, the publication of his Ninety-Five Theses, which outlined various abusive practices of the church, is considered the founding event that led to this division in Germany and the creation of the Evangelical Church.

Reconciliation instead of hero worshiping

In 2016-2017, a year of commemoration of the Reformation was characterized by an ecumenical approach. In the past, Protestant churches had celebrated major Reformation anniversaries by worshiping Martin Luther as a hero — but in recent years that approach changed.

The Evangelical Church in Germany (EKD) sought to turn the celebrations of "500 Years of Reformation" into a common celebration of Christ with the Catholic Church.

Through various events, both sides paid tribute to Martin Luther while emphasizing their will to overcome divisions. On March 11, 2017, a central reconciliation service was held in the city of Hildesheim to jointly mark 500 years since the Reformation. 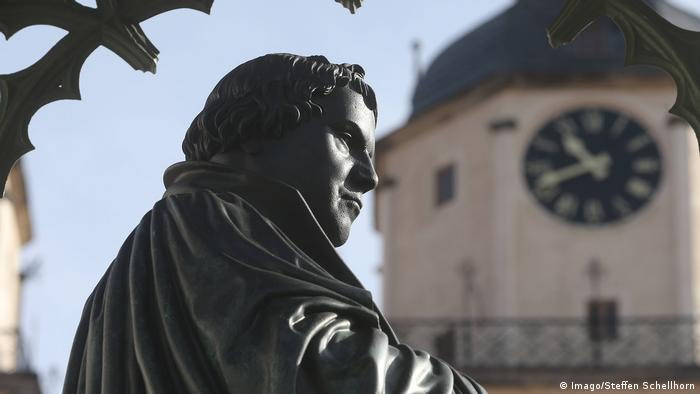 Luther Memorial in the city of Wittenberg, where the Reformation began

The goal in recent years has been to reach better understanding and find common ground between the two churches. A new united church is, however, far from being realized — and it is doubtful that it ever will.

To describe their relationship, the expression "reconciled diversity" is used by both sides. Many of the aspects that were reformed by Luther at the time still divide both groups to this day.

Here are the eight main differences:

1. Understanding of the Bible

Catholicism and Protestantism have distinct views on the meaning and the authority of the Bible. For Protestant Christians, Luther made clear that the Bible is the "Sola Skriptura," God's only book, in which He provided His revelations to the people and which allows them to enter in communion with Him.

Catholics, on the other hand, do not base their beliefs on the Bible alone. Along with the Holy Scripture, they are additionally bound by the traditions of the Roman Catholic Church.

Catholics and Protestants have a different view on the nature of the church. The word "catholic" means "all-embracing," and the Catholic Church sees itself as the only true church worldwide, under the leadership of the pope.

In contrast, the Protestant Churches which have emerged from Reformation, also called "Evangelical," which means "according to the Gospel," do not make up one united Church. There are rather several tens of thousands of different denominations around the world. Officially, all of these many churches are considered equal.

Protestants are not open at all to papal primacy. According to the Evangelical view, this dogma contradicts statements in the Bible.

Catholics see in the pope the successor of the Apostle Peter, the first head of their Church, who was appointed by Jesus. The papal office is justified by an allegedly unbroken chain of consecrations, ranging from the first century to the present. 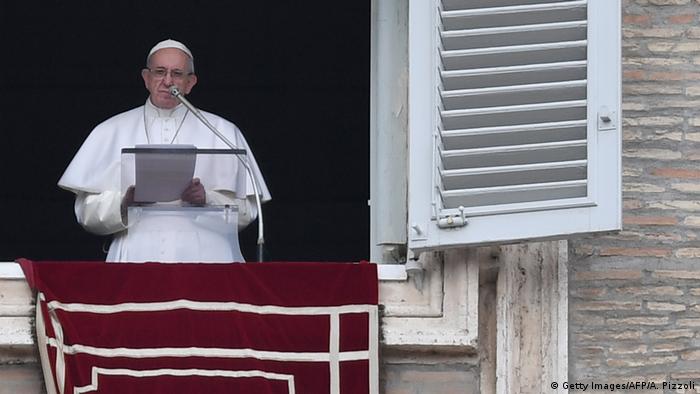 Even if many Protestants like Pope Francis, they categorically reject papacy

4. Understanding of the office

This continuous chain, known as the apostolic succession, is overall significant for different spiritual offices in the Catholic Church. With the Sacrament of Holy Orders, bishops, priests and deacons receive a lifelong seal of God giving them sacramental authority over Catholic laypeople. This consecration can only be given to men.

Protestants do not consecrate specific persons into office, but rather accept the principle that priesthood can be transferred to every believer — even to women.

The Catholics' views on the spiritual office are reflected in the Eucharist, or Holy Communion, a rite commemorating the Last Supper of Jesus with his disciples before his crucifixion. Once consecrated by a priest in the name of Jesus, bread and wine become the body and blood of Christ. Non-Catholics may not participate in Communion.
In the Protest Church, every baptized person is invited to share and is allowed to lead the Lord's Supper. This approach is not accepted by Catholics.

Additionally, Eucharist has a different meaning for Catholics and Protestants. The bread, known as the Host, embodies Jesus and can therefore be prayed to. For Protestants, the ritual only serves to commemorate Jesus' death and resurrection. 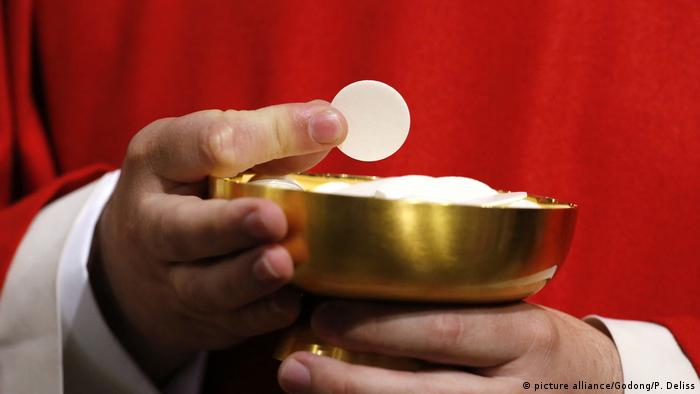 For Catholics, the Host represents bread that is consecrated to represent Jesus' body

In the Roman Catholic Church, there are seven solemn rites, called sacraments: baptism, confirmation, the Eucharist, matrimony, penance, holy orders and extreme unction. The church believes these sacraments were instituted by Jesus and that they confer God's grace.

Most Protestant churches only practice two of these sacraments: baptism and the Eucharist (called Lord's Supper). They are perceived as symbolic rituals through which God delivers the Gospel. They are accepted through faith.

7. Marian dogmas and the worship of Saints

The Roman Catholic Church reveres Mary, the mother of Jesus, as "Queen of Heaven." However, there are few biblical references to support the Catholic Marian dogmas — which include the Immaculate Conception, her perpetual virginity and her Assumption into heaven. This is why they are rejected by Protestants. 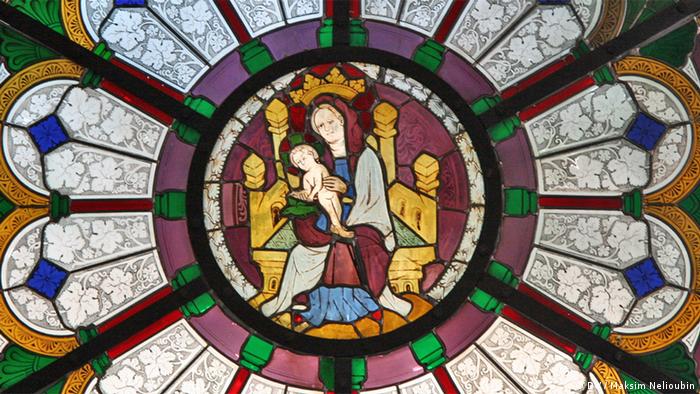 Though Protestants believe Mary was the mother of Jesus, unlike Catholics, they do not venerate her

The Catholic Church also practices the veneration of saints. Dead models of faith, recognized as "saint" by the church through canonization, can be prayed to for help in maintaining faith in God. There are over 4,000 saints. Their remains are considered holy relics which are venerated.

This veneration is also categorically by the Protestant Church as unbiblical. According to Reformation views, every person may and should pray directly to God.

All main world religions integrate in some way the concept of celibacy, the vow of abstaining from marriage and sexual relations, and the Catholic and Protestant churches are no exception. In the Catholic Church, celibacy is obligatory for priests. It is seen as a symbol of the undivided succession of Christ.

The Protestant Church rejects this obligation for priests. Martin Luther already demanded its abolition as early as 1520. He made a decisive personal contribution to this end in 1525: The former monk married the former nun Katharina von Bora. Initially unsure of whether he should marry, Luther finally determined that "his marriage would please his father, rile the pope, cause the angels to laugh, and the devils to weep."

Bible on a beer mat: German Protestants hope to increase church talk down at the pub

As the 500th anniversary of the Reformation approaches, the Protestant Church in Hesse and Nassau (EKHN) has launched a quintessentially German religious initiative: "Bible on a beer mat." But who's footing the bill? (07.10.2016)

As Reformation Year begins, Pope Francis welcomed a high-ranking Protestant delegation from Germany to the Vatican on Monday. The pontiff urged both denominations to put all remaining differences aside. (06.02.2017)