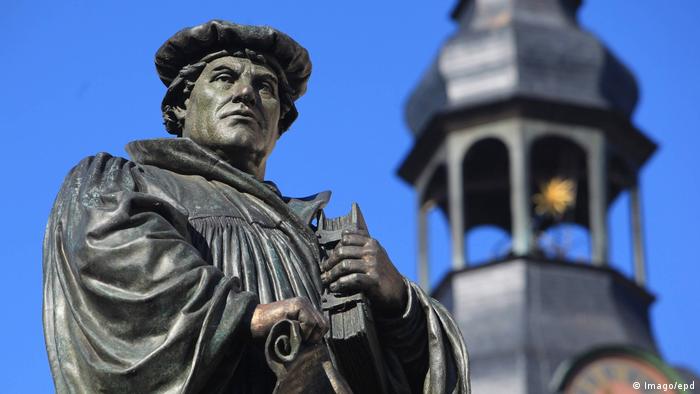 Germany and the Protestant world is in the midst of the biggest "Reformation Festival" of all time. Since October 31, 2016, celebrations have been ongoing to mark the revolutionary events that began on that same day in 1517.

A little lesson in history: The monk Martin Luther (1483 – 1546) is frustrated by the Catholic's Church practice of selling indulgences, which allows people to buy spiritual salvation. He finds the practice fundamentally wrong in terms of theology.

His Bible study has left him with the unshakeable realization that a sinful person who believes in an all-powerful and absolute God is made righteous in the eye's of God through this very same belief and God's mercy — and not through money and good works.

Luther is convinced that this is the core of the Christian message. Consequently, the faithful can turn to their creator directly through prayer. They need neither church nor priest as a middle man — a radical idea that breaks the power of the Catholic Church, starting with its religious doctrine. 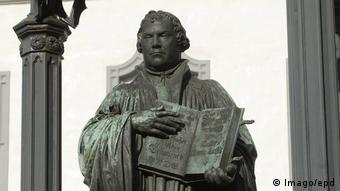 Luther's conclusions open the door for new, unimagined freedoms. But the decades following his famous "Ninety-five Theses"— supposedly nailed to the door of the Wittenberg Church on October 31, 1517 — makes it clear that the Church is in no way, shape or form ready to give up its power without a fight.

At first, Luther's momentum keeps building. With the help of the moveable type printing press, invented by Johannes Gutenberg in 1450, he quickly writes out, duplicates and distributes this new collection of ideas challenging indulgences across the entire land.

In addition, Wittenberg-based painter Lucas Cranach the Elder and his son of the same name provide the Reformation with a face through their portraits of Martin Luther, as well as through depictions of the theologian's compatriots. 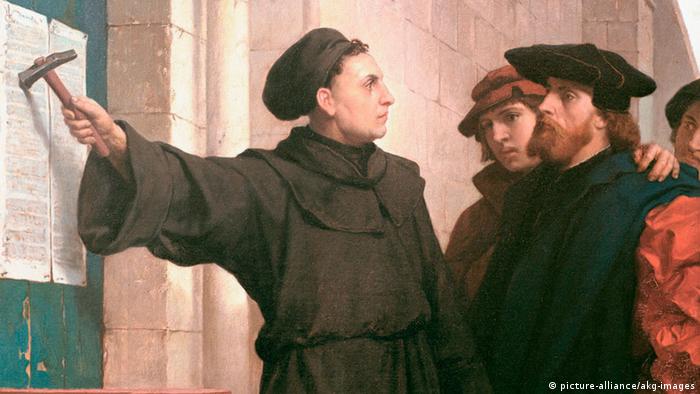 Martin Luther nailing his 95 Theses to the All Saints' Church in Wittenberg, as portrayed in this painting by Ferdinand Pauwels

Wittenberg is the epicenter for a wave of new thought whose affects reach as far as Rome. In June 1518, a heresy trial against Luther begins and some months later in Augsburg, the papal envoy Cardinal Thomas Cajetan interrogates the reformer, who steadfastly refuses to renounce his ideas. The following year Karl V (1500-1558) becomes the new emperor. He is yet another Luther opponent who sees himself as a protector of the existing Church.

The rebellious monk, who still thinks he can reform his Catholic Church, composes three major reformation texts in 1520. The most important one, "On the Freedom of a Christian," is more or less a basic law for Christians that sometimes reads like incitement to revolution.

But Luther, who uses the term "freedom" in a purely theological sense, has an entirely different understanding of freedom. It comes from the Apostle Paul in the Bible. Man's fundamental behavior is not free but rather is influenced by the Devil and sin, or by Christ and goodness. Luther wants to emancipate people by turning them towards Christ. He rejects political radicalization and armed rebellion. 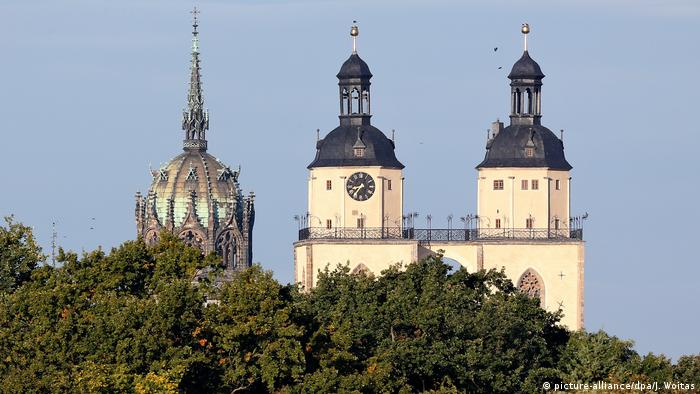 The "Empire" strikes back

Provocative theses, reformation writings, stubborn refusal to revoke ideas — it's all too much for the Pope Leo X who in January 1521 excommunicates Luther.

In April that same year, Luther has to defend himself before the emperor. In his famous April 18th speech, the reformer states that he will only take back his words if biblical fact can disprove them, and he underlines that he cannot act against his conscience. "Here I stand. God help me. Amen," he supposedly concluded his speech. Emperor Charles V places the Edict of Worms upon Luther, declaring him an outlaw and banning his writing.

Luther doesn't have to wait long for help. His countryman Frederick III, Prince of Saxony, arranges for the outlaw to be kidnapped during his return home from Worms and brought to safety in Wartburg Castle, where he writes under a pseudonym.

Luther uses these 10 months to compile numerous writings that further define Reformation issues. He also becomes the first person to translate the New Testament from ancient Greek into German. Up until that point, more than 70 versions had existed, all of which were based on the Latin text, itself a translation filled with inaccuracy. Luther's translation, printed in 1522, is a linguistic masterpiece — and a bestseller carrying the hefty price tag of half a fattened ox. 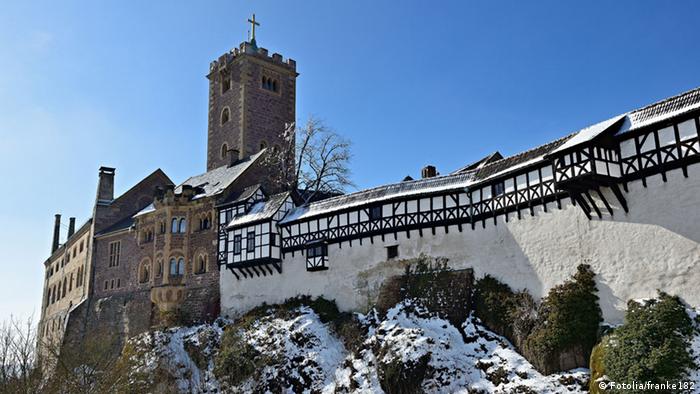 The castle in Wartburg where Luther took asylum

Despite his outlaw status, Luther returns to Wittenberg in March 1522 where he immerses himself in diverse projects and continues to surprise his contemporaries.

In 1525 the once celibate monk marries former nun Katharina von Bora. Together they raise six children and found the first Protestant parsonage, which serves as the model for a parish's spiritual and organizational center well into the 20th century.

In 1526 the Imperial Diet in Speyer makes the notable decision to allow princes and states to decide themselves whether to remain Catholic or convert. This leads to the first official Lutheran churches and Protestant schools.

During Luther's travels, he realizes that his most of his countrymen actually know very little about Christian belief. This spurs him in 1529 to write both the "Small Catechism" for the common man and the "Large Catechism" for the priesthood, together the fundamental instructive works of Protestant belief through today.

The same year reform-oriented princes in the Imperial Diet in Speyer protest the ongoing Edict of Worms. Their actions give "Protestantism" its name. Luther had previously referred to his movement as "Evangelistic." At the end of July 1530 Emperor Charles V calls for an imperial diet in Augsburg. The empire risks breaking up, in part to the religious divisions brought to life by Luther. Still religiously banned and politically outlawed, Luther cannot take part without risking his safety. Instead, his friend and fellow religious reformer Philip Melanchton represents him in Augsburg.

In arduous hearings, Melanchton attempts to earn recognition of the Protestant denomination from the Catholic side, arguing for the publication of the "Augsburg Confession," which states that Protestant teachings go against the Catholic Church. His fight proves to be in vain.

Read more: Luther is famous, but we know little about him

Impact of the political climate

However, Emperor Charles V can't afford to crack down on the Protestants. The Ottoman army threatens both the Christian West and the Holy Roman Empire, making him dependent on any form of military aid. In order to secure internal unity, the emperor grants Protestants religious freedom in exchange for military participation in the Ottoman-Habsburg wars. However, conflicts between Catholics and Protestants are not settled until the Peace of Augsburg in 1555.

In 1534, Luther and collaborators finish translating the Old Testament from Hebrew into German. The reformer's vivid and memorable language helps educate inhabitants of the Holy Roman Empire in literacy, as well as furthers a feeling of national unity. Hundreds of the idioms and sayings from Luther's Bible translation remain woven into the German language today. 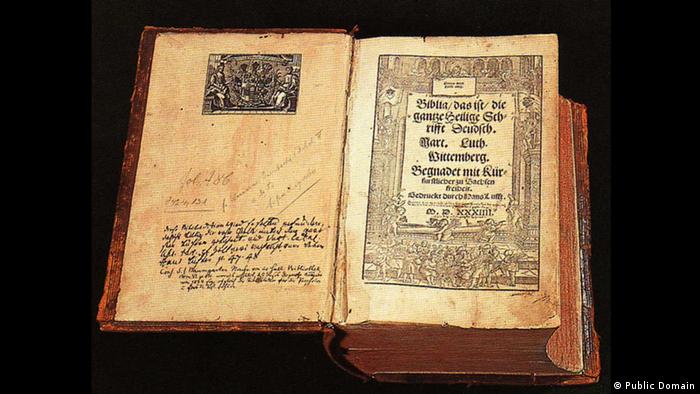 But the most important result of Luther's translations was that it made reading the Bible accessible to each and every individual — and not just to the upper educated classes. In its first twelve years, the 1534 Luther Bible sold more than 100,000 copies, making its translator the most widely-circulated publicist of the 16th century.

Luther's opinion of Jews and their beliefs was in no way influenced by Christian charity and tolerance. In this respect, he typifies the times. He initially advised kindness towards Jews, given that Jesus himself was born one, and argued in 1523 that Jews who converted to Christianity should be allowed to work in all trades and not just in money lending.

Luther's outright hatred revealed itself some 20 years later. In his 1543 text "On the Jews and Their Lies," he took the Middle Age religious hatred of Jews one step further, labeling them "Christ's murders" and calling for their synagogues and homes to be destroyed and, finally, for their expulsion. Some researchers call Luther's statements "pre-modern anti-Semitism."

The reasons for Luther's change of mind remain pure speculation. The change may have stemmed from disappointment. He allegedly hoped that Jews would convert to the newly established Protestant belief — which they did not. Whatever the reason, this ugly side of Luther remains part of his legacy to this day. 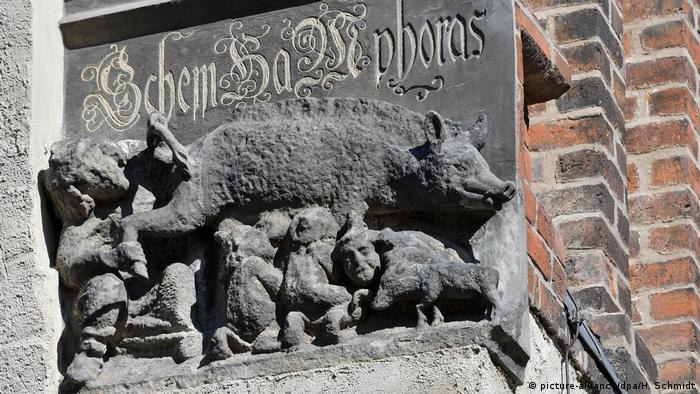 An anti-Semitic relief at Luther's Town and Parish Church of St. Mary's in Wittenberg is symbolic of the lack of tolerance that also marked Luther's thought

When Martin Luther died on February 18, 1546 in his birth city of Eisleben, he left behind a giant body of work. The ideas of the Reformation had spread across the Christian realm. While a blessing for some and a curse for others, the changes he set into motion were unstoppable and reached all areas of social and political life. They opened the door to a new era — though no one at the time suspected how violent the resulting religious conflict would be.

It wasn't until 1999 that the Catholic Church acknowledged Luther's doctrinal justification. The moment was a milestone in Catholic-Protestant dialogue, since it meant tacit acceptance of Luther's unshakeable belief that Christians are holy through God's mercy alone, and not through acts — no matter how great they may be.

In 1517 Martin Luther penned a document attacking the selling of indulgences. His 95 Theses were to spark the Reformation and the split with the Catholic Church. Germany is celebrating the 500th anniversary of this act. (02.01.2017)

The life of Martin Luther in pictures

500 years ago Martin Luther wanted to achieve a just church for everyone. Today the places that played a significant role in his life give insight into the famous reformer's works. (31.10.2016)

Martin Luther lives on - in the art world

In contrast to three national Martin Luther exhibitions in Germany, a new international show in a former jail in Wittenberg entitled "Luther and the Avantgarde" triggers controversy with works by 66 artists. (22.05.2017)

How important is Martin Luther today?