Martin Luther not only reformed the Church 500 years ago, but also discovered the power of music as a songwriter and composer. His chorales gave churchgoers a voice and helped spread the ideas of the Reformation. 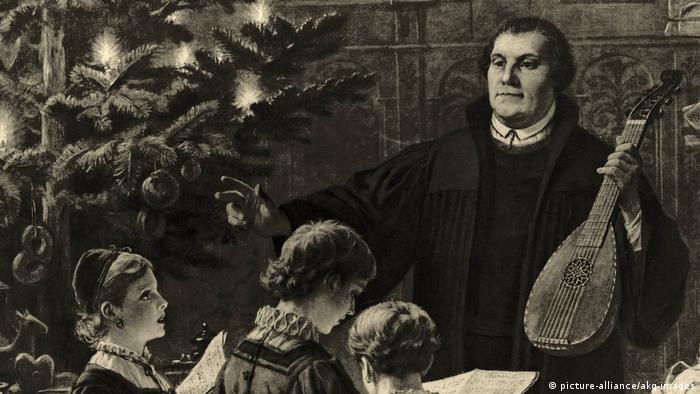 Schweinfurt, Germany in 1532: A Catholic congregation would like to join the Reformation, but the priest opposes the move. So, one Sunday, the churchgoers start singing a song written by church reformer Martin Luther, namely "A Mighty Fortress Is Our God."

The congregation wins and the priest flees. In the following days, young people roam the town's streets belting out the song, recounts theologian and journalist Burkhard Weitz: "A short while later, the Reformation was introduced in Schweinfurth."

For the past 500 years, Martin Luther (1483-1546) has been known as an eloquent author of theological writings. But he is far less known as a songwriter and musician, although he not only played a key role as a reformer of the Christian faith, but also initiated a new chapter of spiritual music.

Music from a young age 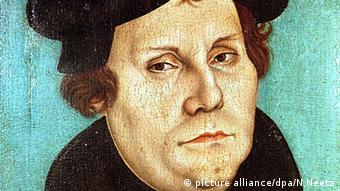 Dieter Falk, a successful musician and music producer, said, "In my view, Luther was the first pop musician of the church. And pop means nothing but popular."

At the young age of 14, Luther was trained in music theory while attending the Latin school in Eisenach. He sang in a church choir and a student choir. Later on, he studied theology, music, voice and composition at the Erfurt University. He played the lute and the German flute, wrote four-part compositions and joined a musical circle — a kind of band.

As Burkhard Weitz told DW, "He even thought about becoming a musician, but then opted for theology."

Had he decided differently, the course of history could have been changed. After all, it was his expertise in theology that enabled Luther to take on the Catholic Church in 1517 and transform social and political thought at the threshold of the modern era.

Luther's breakthrough as a songwriter

Things soon got busy — and stressful for Luther. Besides developing his reformatory thoughts and putting them in writing, he had to deal with tough disputes with the pope and the clergy, as well as the emperor of the Holy Roman Empire and a Church ban against him. Luther didn't have much time for music.

That changed in 1523, when he composed his first song. It was full of defiance, says Burkhard Weitz: "When the first martyrs who followed his teachings were burned in Brussels, the reformer was shocked and horrified. He commented on the events in a song."

Still haunted by the terrible fate of the martyrs, Luther composed the song "Dear Christians, One And All, Rejoice." In 10 verses, Luther described how God has saved humanity. The song appealed to many people and contributed to the spreading of reformist principles. It was sung all over the text was even printed on flyers. Its composer came to understand just how powerful a song can be.

Highly motivated, Luther started to translate Latin hymns into German. He also wrote songs to the psalms of the Old Testament, and incorporated basic reformist principles in new songs. Over the next 12 months, he composed 24 new such songs.

Among them is one song that has encouraged many Christians over the past centuries. "My favorite choral is 'Out of the depths I cry to Thee.' Here, Luther seems to be crying out from the depths of his soul, and these are the songs that give me goosebumps," musician Dieter Falk told DW.

"On my instrumental CD, which I devoted Luther, I felt most comfortable at the piano with that particular song because it enabled me to put myself in his psychological state." The chorale clearly proved that Luther wasn't just a poet, but also a composer.

Recipe for a church hit 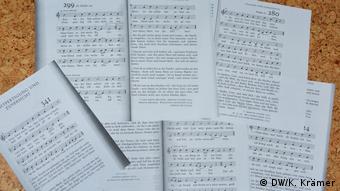 But that wasn't always the case. When a melody fit a particular text, Luther was also willing to borrow popular songs that were sung in pubs or on the streets. The original version of the Christmas song "From Heaven Above to Earth I Come" was based on a ballad.

"The guy was totally uninhibited," commented Falk, adding, "Considering 'From Heaven Above to Earth I Come' and the similarly constructed 'A Mighty Fortress Is Our God,' I come to the conclusion that, like many modern musicians, Martin Luther also used to steal from his own repertoire. These songs are hits."

Dieter Falk knows how to identify a hit. The records he produced for Patricia Kaas, Pur, Roger Chapmann, Paul Young and Gildo Horn have sold more than 20 million copies worldwide.

"Earworms — that's the keyword," said Falk. "An earworm, a catchy tune, stays in our memory for a very long time. The structure of Luther's verses was quite simple, differing from the structure of modern pop songs with a verse, a refrain, and a bridge. Luther's verses were pure verses. Once in a while, there was also a refrain, like in folk songs."

Catchy melodies and verses that were easy to memorize were an ideal combination in a time when most people were able to read neither texts nor music. "The big advantage of these songs was that they provided two different ways of memorizing them — by the rhythm and rhyme of the verses, or by the melody," explained Burkhard Weitz.

From memory to the printing press

But memorizing alone wasn't enough. The first collection of reformist songs was published in late 1523, namely the "Achtlieder Buch," a collection of eight songs of which four were composed by Luther. One year later, all 24 of his songs were published in a choir songbook for schools. 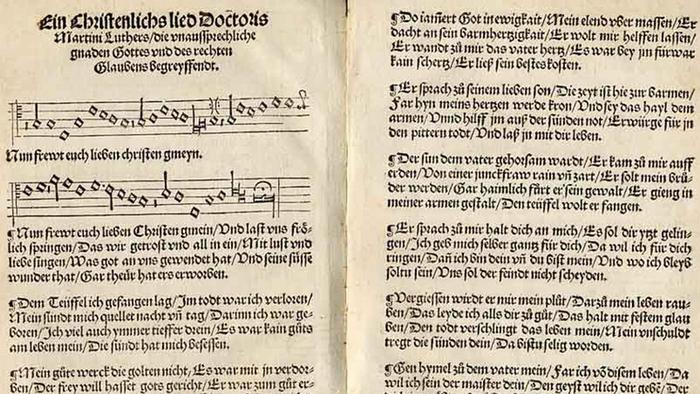 Martin Luther's "Achtliederbuch" was a collection of eight songs

But Luther did not intend to limit himself to working as a poet and a composer. In 1523, he wrote to his companion and friend Georg Spalatin: "I have the intention to create psalms for the people, in other words spiritual songs so that the word of God will remain among the people also by means of music. That's why we are looking for poets everywhere." More and more Christians were daring to express their faith in German rhymes.

Luther's next objective was to establish singing in religious services that had been held in Latin up until that point. As Burkhard Weitz explained, "In his writing 'Formula missae' from 1523, Luther lamented that 'only a choir of clergymen and pupils sing and respond when the bishop blesses the bread and performs his service.' That's why he called for 'German songs to be sung by the people during holy mass.'"

To Luther, it was important for people to understand what was going on during the service. "That's why he wanted to preach in German, to introduce German liturgy and to sing German songs." The reformer managed to do that in Wittenberg, where he was most active.

Read more: Luther is famous, but we know little about him

Since he knew that most of his compatriots could only be reached in their native language, Luther wrote a mass in German in 1526 that included German songs. The church congregation suddenly took on a whole new role. Instead of sitting quietly and listening, they were now playing an active role in the mass. 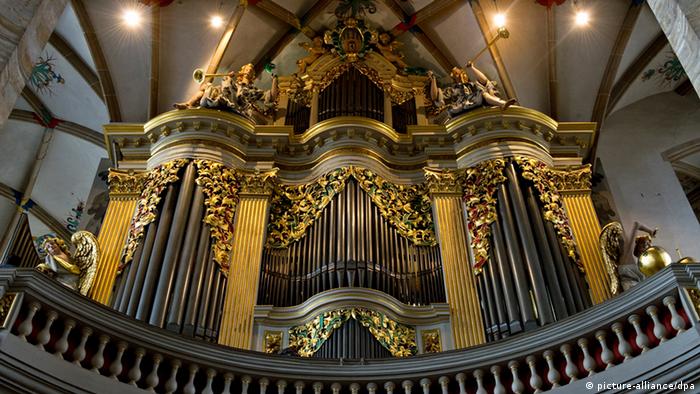 Organ at the Freiberg Cathedral (Saxony): Music has been a central part of church life in Germany since Luther

For Luther, a feeling for language and music were both important when writing new songs, though he also felt the music was meant to serve the text. And songs in general, he thought, were there to spread the word of God.

Fierce weapons of a singing movement

The propaganda effect of Luther's songs, as well as songs by other reformist composers, has been documented over and over again. It's not surprising that the diocesan town of Hildesheim prohibited the singing of reformist songs in the public twice, namely in 1524 and 1531. They were considered fierce weapons of the reform movement, explained Burkhard Weitz: "From early on, singing was a trademark of the Lutherans, and it turned the Reformation into a singing movement."

Dieter Falk goes even further: "There is a famous quote by US civil rights activist Martin Luther King (1929-1968), who once said, 'What I learned from Martin Luther is that a movement can only succeed when it sings.' Without a doubt, music has played a prominent role in the spread of the Reformation." 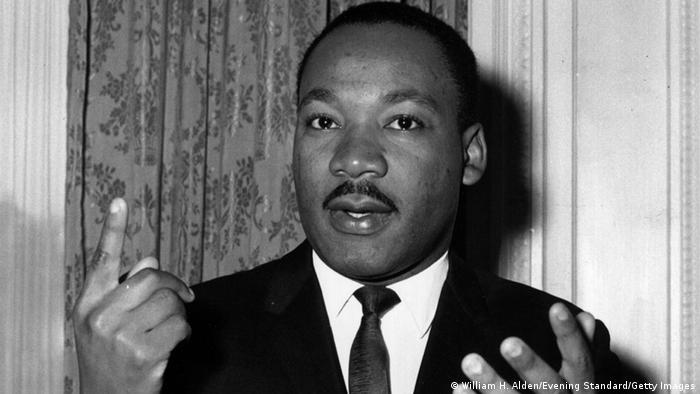 According to Falk, Luther was one of the first to achieve decisive cultural and religious change with music. The song mentioned above, "A Mighty Fortress Is Our God," composed in 1529, became the most triumphal song of the Reformation. 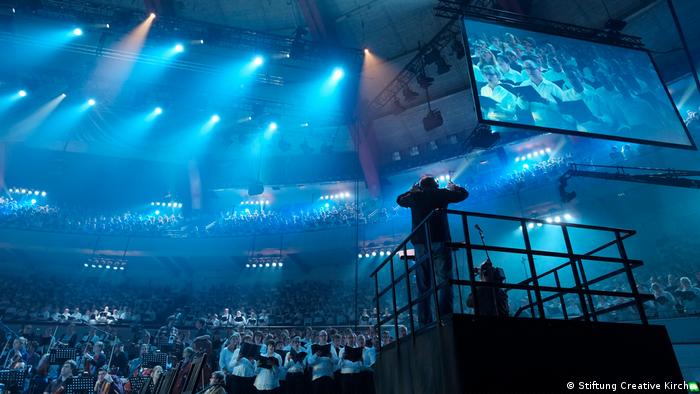 Dieter Falk touring across Germany with his Luther Pop-Oratorium

Numerous musical productions are planned this year, on the 500th anniversary of Luther's 95 theses, to make sure his role as a songwriter and composer will not be forgotten. Dieter Falk has made a large contribution by touring across Germany with the Luther oratorio that he composed.

"Of course, I have also worked on Luther's chorales. I have arranged them and transformed them into the contemporary language of pop music." The reformer would probably be very pleased about that. After all, he said "music is one of the most significant and delightful presents God has given us."

Martin Luther across the centuries

The third national exhibition celebrating the 500th anniversary of the Reformation shows that treasures are not always made of gold. Wittenberg presents historical artifacts and art over the centuries. (15.05.2017)