US vows tariffs on Mexico until it stops border crossings

Donald Trump's new trade deal with Mexico and Canada awaits ratification and yet he has scheduled fresh tariffs on Mexican goods. He warned he would steadily jack up tariffs unless Mexico stops border crossings. 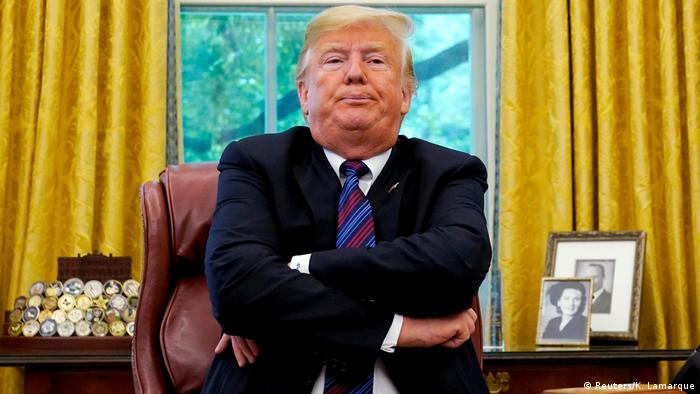 The US on Thursday vowed to impose a 5% tariff on all goods coming in from Mexico in retaliation for uncontrolled migration over their shared border.

US President Donald Trump said he would increase the tariff until Mexico was able to stop people illegally crossing into the US via the countries' shared border.

Border control was one of Trump's key election promises, and centers on constructing a physical barrier.

He later said in a statement: "If the illegal migration crisis is alleviated through effective actions taken by Mexico, to be determined in our sole discretion and judgment, the tariffs will be removed."

"Mexico's passive cooperation in allowing this mass incursion constitutes an emergency and extraordinary threat to the national security and economy of the United States."

Officials said the tariffs would apply to all goods.

The announcement came after he shared surveillance footage purporting to show a large group of illegal migrants crossing a border fence into El Paso.

The two countries are deeply connected through trade, with about 90% of Mexican exports bound for the US. Relations have been tense since Trump took power, with trade and migration both major friction points.

The US president has accused the Mexican government of inaction regarding the groups of Central American asylum seekers who transit through Mexico from countries including El Salvador, Honduras and Guatemala.

The announcement took Mexico and investors by surprise, especially given the recent conclusion of negotiations on the unratified USMCA trade deal meant to replace the North American Free Trade Agreement between the US, Canada and Mexico, as well as an ongoing trade war with China.

"But also, it is not a secret that President Trump is very active on Twitter, he posts many tweets about things he later drops, he talks about other things that die there, only on some does he take action."

He said the Mexican government "will not sit idle until June 10," when the tariffs are meant to kick in, "but I trust that this is something that will not actually happen as it would be extremely serious."

Few issues have affected Latin America more this year than migration. But host countries are reaching their limits, despite a general willingness to take people in. (31.12.2018)

US President Trump hopes to use an emergency declaration to redirect defense money in order to fund a border wall with Mexico. The latest court order may prove a setback on one of his highest priorities. (25.05.2019)