US President Trump hopes to use an emergency declaration to redirect defense money in order to fund a border wall with Mexico. The latest court order may prove a setback on one of his highest priorities. 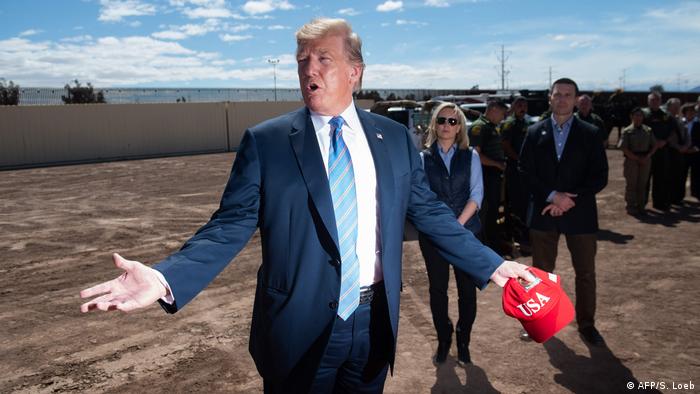 A federal judge on Friday temporarily blocked President Trump from constructing key parts of his border wall with money secured under his declaration of a national emergency.

District Judge Haywood Gilliam's order prevents the administration from working on two Pentagon-funded wall projects – one in New Mexico and another in Yuma, Arizona.

Trump administration officials "are enjoined from taking any action to construct a border barrier in the areas defendants have identified as Yuma Sector Project 1 and El Paso Sector Project 1 using funds reprogrammed by DoD," Judge Gilliam ordered, referring to the Department of Defense.

The California judge's order may prove to be a setback for President Trump, who has described the building of a border wall as one of his top priorities.

In March, the Republican-controlled Senate voted to terminate Trump's declaration of a national emergency on the border with Mexico — a move he had implemented in order to secure funds for the controversial border wall. A day later, the president vetoed the resolution, calling the congressional move "dangerous" and "reckless."

"Congress' 'absolute' control over federal expenditures, even when that control may frustrate the desire of the Executive Branch regarding initiatives it views as important, is not a bug in our constitutional system. It is a feature of the system, and an essential one," Judge Gilliam wrote in his 56-page opinion.

President Trump hopes to use the emergency declaration to redirect $3.9 billion (€3.4 billion) of the defense budget in order to fund the border wall with Mexico. He used the tactic after a budget standoff with Congress that led to a 35-day partial government shutdown, which ended in January.

Trump has threatened to close the border between the US and Mexico, arguing that Mexico was doing nothing to stop illegal migration. Many people who cross the border illegally ultimately request asylum under US law, which does not require asylum-seekers to enter at an official crossing.

The Trump administration argues that a wall is needed at the Mexico border in order to curb illegal immigration and drug trafficking.

The question for Judge Gillian was whether to allow wall construction with Defense and Treasury funds while lawsuits by the American Civil Liberties Union and the state attorneys general were being heard.

On Thursday, a judge in Washington, D.C., heard arguments by the US House of Representatives that the shifting of money violated the US Constitution.