Donald Trump announces emergency at US border to build wall

The US president described the situation at the Mexico border as a national security crisis that requires a wall, saying "it's a great thing to do because we have an invasion." Legal challenges have already been filed. 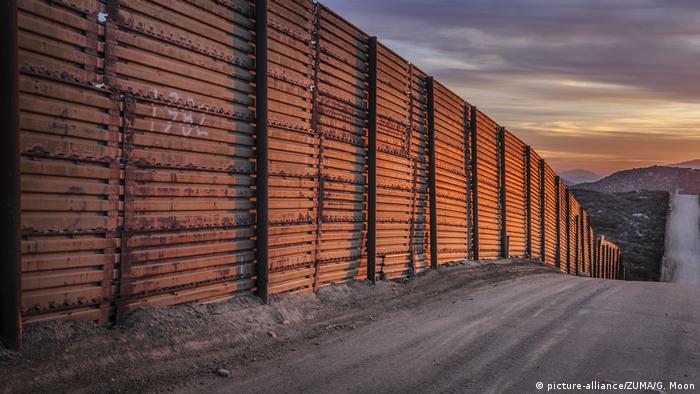 US President Donald Trump declared a national emergency on Friday at the US border with Mexico in a bid to appropriate money to build his so-called border wall.

In a lengthy address from the Rose Garden that also touched on trade with China, Trump said the emergency declaration was a response to "the national security crisis on our southern border." A lawsuit challenging the declaration was filed on Friday.

Read more: Donald Trump's national emergency at the border: What you need to know

DW's Washington correspondent Michael Knigge noted that "even by Trump's standards," his comments over the course of roughly an hour were "muddled and really all over the map." Trump touched on trade with Chinese tariffs, North Korea's nuclear program, the "Islamic State" militant group, former President Barack Obama's administration and US defense spending.

With Trump still at the podium, Press Secretary Sarah Huckabee Sanders published a black-and-white photograph of him signing the document.

When news emerged of Trump's intention to declare a national emergency, Democrat House Speaker Nancy Pelosi said: The declaration is "a lawless act, a gross abuse of the power of the presidency and a desperate attempt to distract from the fact that [Trump] broke his core promise to have Mexico pay for his wall."

The American Civil Liberties Union launched a legal challenge against Trump's declaration, saying: "We're suing President Trump over today's blatantly illegal declaration of a national emergency. There is no emergency. This is an unconstitutional power grab that hurts American communities. We'll see him in court."

Public Citizen, a progressive, non-profit group, said it filed a suit against Trump's plan in a federal district court in Washington on behalf of three Texas landowners and Frontera Audubon Society, a nature park in the Rio Grande Valley.

But some lawmakers backed the move, with Veteran Republican Senator Lindsey Graham saying: "I stand firmly behind President [Trump's] decision to use executive powers to build the wall-barriers we desperately need."

'One way or another'

Throughout his presidential campaign and earlier presidency, Trump repeatedly said that "Mexico will pay for the wall,"albeit often adding caveats like "one way or the other." However, Trump appears to have shifted from his campaign pledge.

Trump suffered defeat last month when he pushed the federal government into the longest shutdown in US history over border wall funding. He failed to secure additional funds in the temporary budget deal that ended the shutdown. He has now pledged to sign a bipartisan budget bill passed in Congress to allow the government to continue running.

The budget provides roughly $1.4 billion (€1.2 billion) for border barriers, however, that figure is far below the $5.7 billion Trump had initially demanded. He will now seek the additional funding from federal programs, including military construction funds.

Republican and Democrat lawmakers have criticized the move, saying it sets a dangerous precedent. The opposition has vowed to fight the emergency measures in courts and block Trump from taking additional federal funds to build the wall.

The "deal" President Trump announced to temporarily end the longest government shutdown in US history was no deal at all. But given the suffering his shutdown continues to cause for so many, there are no winners here. (26.01.2019)