Donald Trump's national emergency at the border: What you need to know

The White House has said President Donald Trump will declare a national emergency on the Mexican border to get funds to build a wall there. DW takes a look at why Trump made the move and whether it can succeed. 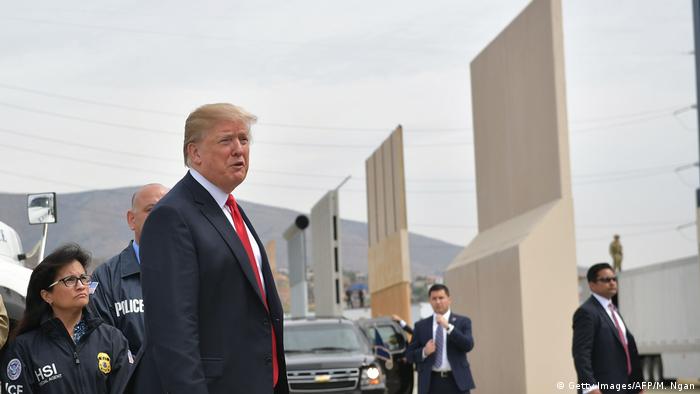 What is a national emergency declaration?

The US Constitution generally forces the president to seek the approval of both houses of Congress — the House of Representatives and the Senate — to spend taxpayer money. The president can, however, bypass Congress by declaring a national emergency, which allows the White House to redirect spending as it sees fit. The 1976 law that permits this step, the National Emergencies Act, gives the president a wide scope in defining exactly what qualifies as an "emergency."

Why is Trump ready to declare one?

Trump wants to keep a campaign promise to build a wall on the US border with Mexico. But  Congress has refused to give the government the $5.7 billion (€ 5 billion) in taxpayer money Trump requested. Instead, lawmakers have offered $1.4 billion for border fencing. Trump pledged to build the wall and have Mexico pay for it during the 2016 presidential election. He said it would reduce crime and halt illegal immigration into the United States.

How could Trump divert money to the wall?

Using emergency powers, Trump could reallocate federal funds from other projects to use on building a barrier. Observers have said that some of the reportedly $21 billion set aside for military construction could be used to pay for the wall. He could also order the army to stop any civil building projects and redirect the funds and personnel to the wall. Other options would be taking money from funds for disaster relief or counter-drug operations.

Why doesn't Congress give Trump the money?

Democrats, who have a majority in the House of Representatives, say the wall costs too much, would be ineffective and is immoral. Some Republicans are unwilling to support Trump's wall demands because they want the government to focus its efforts on other political problems.

Congress can override a national emergency declaration if both the House and the Senate agree to do so. The Democrat-controlled House is likely to try, but the Republican-controlled Senate might block the attempt to support Trump.

Who else can stop Trump?

Legal experts are split on the scope of the National Emergencies Act. Lawmakers, state governments, or businesses affected by the emergency are likely to ask the courts to overrule the declaration. They could argue that no emergency exists on the southern border or that the president's scope for spending taxpayer money is limited.

And how exactly is this related to the shutdown?

Trump said he would sign the most recent funding bill passed by Congress to avoid a shutdown, but that he would also declare a national emergency because the budget bill did not meet his funding demands for the border wall. The government partially shut down in December for a record 35 days after Trump refused to sign an earlier bill that did not contain funds for the wall.