The US president issued the veto after Congress voted to end his declaration of a national emergency at the US-Mexico border. Democrats have said they will try to override it, though it's unlikely they will succeed. 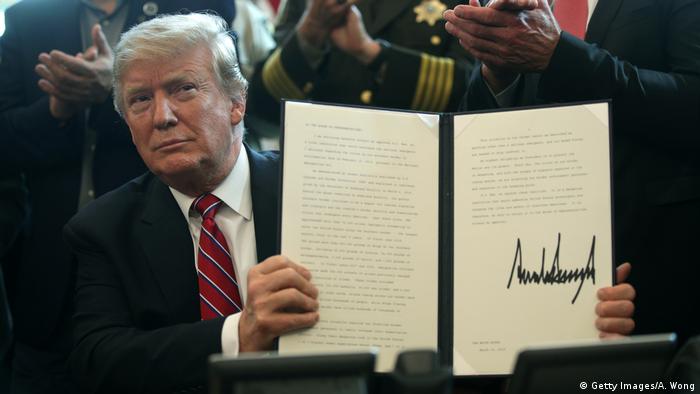 US President Donald Trump signed his first veto on Friday, overruling a resolution the US Congress passed in order to end his emergency declaration at the US border with Mexico.

"Today I am vetoing this resolution," Trump said at the White House. "Congress has the freedom to pass this resolution and I have the duty to veto it."

He added that the congressional resolution to end the emergency declaration was "dangerous" and "reckless."

Trump hopes to use the emergency declaration to redirect $3.9 billion (€3.4 billion) in the defense budget in order to fund a controversial border wall with Mexico. He used the tactic after a budget standoff with Congress that led to a 35-day partial government shutdown that ended in January.

Shortly after the announcement, US House Speaker Nancy Pelosi said the House of Representatives plans to vote on March 26 on overriding Trump's veto.

On Thursday, 12 Republicans in the Senate crossed party lines to vote in favor of the resolution that would have ended Trump's emergency declaration.

A two-thirds majority is needed in Congress in order to override Trump's veto. Despite Republicans crossing party lines to rebuke Trump, it's unlikely the majority is there to block the move.

The Trump administration argues that a wall is needed at the Mexico border in order to curb illegal immigration and drug trafficking. The wall was also one of the key promises Trump made during his presidential campaign.

Arizona locals give their perspective on border security