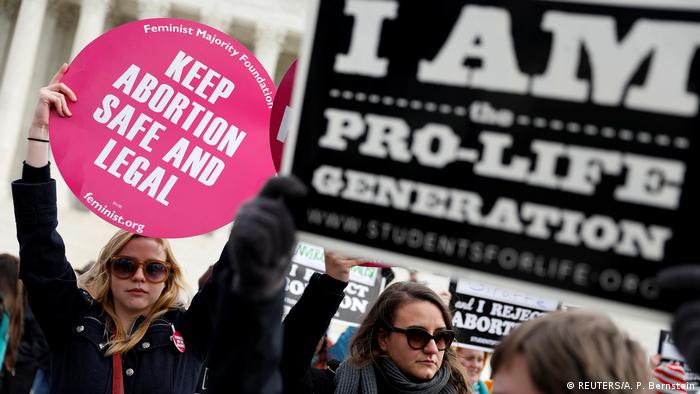 Thousands of "pro-life" activists gathered in the US capital on Friday for their yearly march against abortion rights. Protesters gathered to celebrate a political shift in their favor with the election of US President Donald Trump.

"Life is winning in America. And today is a celebration of that progress," Pence told the crowd. He noted that Republican lawmakers - who are overwhelmingly "pro-life" - hold majorities in both houses of Congress.

As governor of Indiana, Pence signed off on some of the nation's strictest abortion laws, including one last year that required women to bury or cremate fetal tissue.

The law was eventually struck down by a federal judge, but similar measures have now surfaced in other states, including Texas.

Trump threw his support behind the march with a markedly different tone than the one he used to address the women's marches that took place in the United States and around the world last weekend.

"To all you marching --- you have my full support!" Trump wrote on Twitter.

In one of his first acts as president, Trump reinstated a ban on US federal funding for foreign NGOs that mention abortion services. Critics and healthcare providers have said this does not reduce abortions, but makes them unsafe and puts women's lives at risk.

Trump will also soon announce his choice to fill an empty seat on the Supreme Court, with his nominee widely expected to oppose abortion rights.

DW's Alexandra von Nahmen spoke with pro-life protesters at the march about how they think the new administration will deal with the issue going forward.

"I do feel very positive that things are happening since Trump and the Republicans have control of Congress," Ann, a protester from Illinois, told DW.

"You never know what the outcome is going to be, so we're optimistic but still kind of holding our breath until the day that Roe v. Wade is overturned."

The march is held each year close to the anniversary of the Supreme Court's Roe v. Wade ruling, which legalized abortion in 1973.

Anti-abortion groups are often inspired by conservative religious convictions that life begins when a sperm cell fertilizes an egg cell and thereby view abortion as a form of murder.

People in the United States are divided on personal abortion beliefs, but a majority support abortion in certain circumstances.

Last spring, the latest Gallup survey on the topic found that 47 percent of Americans said they were pro-abortion rights while 46 percent said they were anti-abortion.

Seventy-nine percent of those surveyed believe that abortion should be legal in either some or all circumstances.

The rally comes on the heels of last weekend's Women's March, which drew millions of people around the country to protest Trump, with many supporting women's health and reproductive rights.

Millions of people worldwide protested right-wing populism at Women's Marches over the weekend. DW spoke to Birgit Sauer, an expert in women's issues, about reproductive rights and the surge of the political right. (24.01.2017)