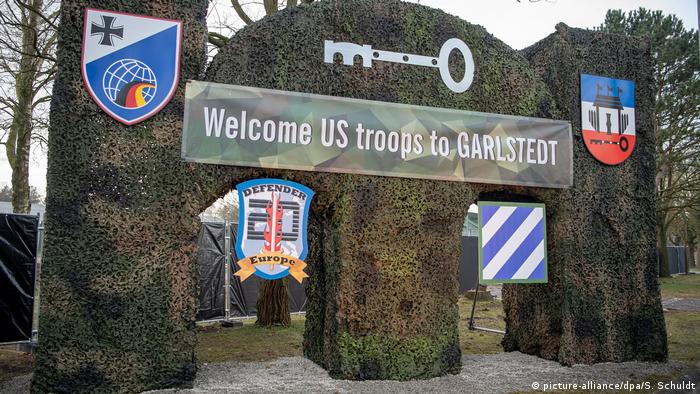 The first contingent of US troops, tanks and equipment taking part in the "Defender Europe 20" military exercise began arriving in the northern German port of Bremerhaven Friday, kicking off the the largest deployment of US-based forces in Europe in over 25 years.

In total, over 20,000 troops and 20,000 pieces of equipment are being shipped across the Atlantic, arriving at six European seaports. They will then transfer to staging areas and on to military maneuvers with European partners, the US Army said.

A significant part of the troops and equipment are expected to be deployed to Poland, Latvia, Lithuania, and Estonia.

The role of Russia

The mass movement of US troops across the Atlantic into Germany and eastern Europe is intended as a test of trans-Atlantic military cooperation and capability. It comes as NATO's Eastern European members are wary of Russia's more aggressive posture in the region.

The US army said that the Defender Europe 20 "demonstrates the US military's ability to deploy a large force to support NATO and respond to any crisis."

Claudia Major, an expert in security and defense policy at the German Institute for Security and International Affairs (SWP), told DW that Russia's Crimea annexation was a "wake up call" for Europe.

"The security order that Europe believed it had with Russia no longer worked. Russia was no longer a strategic partner. Europeans have to deal with the question again: 'how do we defend ourselves in Europe?'"

However, Lt. Gen. Martin Schelleis, German commander of the joint support service, said that Defender Europe 20 was not intended to be a sign of aggression towards Russia.

"Russia is not a reason for the exercise, military capabilities can only be rebuilt and maintained in the long term," he said.

Read More: NATO in a nutshell: What you need to know

Germany's central location means that the vast majority of the equipment heading east will be transferred along German roads and rail.

Both the German and US military have said they will try and avoid interrupting daily life, and transports are expected to take place during the night.

"If everything goes well, nobody will notice anything," said Schelleis. "From an operational perspective, we are primarily interested in whether our processes are capable of withstanding loads of this magnitude.

"The exercise is essentially about the transit and transportation of troops," said Major, adding that NATO's eastern European partners in Poland and the Baltic states need to test their infrastructure and capacities.