US states challenge Trump with climate lawsuit | Environment | All topics from climate change to conservation | DW | 06.04.2017

Trump's blocking of energy efficiency standards is only the latest in a series of efforts to roll back existing climate change regulations. Now, states are striking back with a lawsuit. 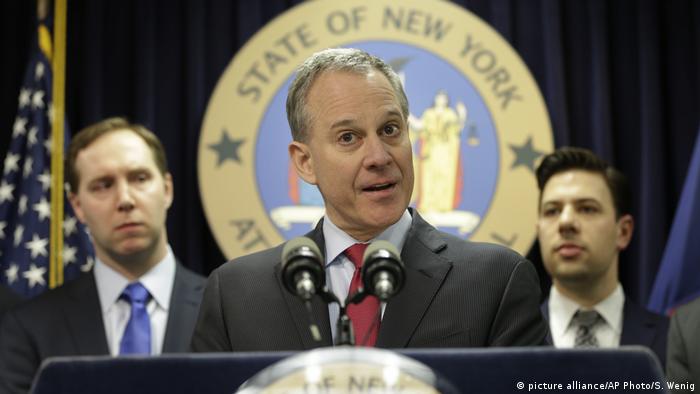 On Wednesday, 17 US states together filed a legal challenge against the United States Department of Energy (DOE) over efforts to remove or shrink existing climate change regulations.

New York Attorney General Eric Schneiderman (pictured center at top), who leads the coalition, claims the federal government has a legal obligation to control and monitor carbon dioxide emissions based on scientific evidence indicating their contribution to climate change.

"The law is clear: The EPA [Environmental Protection Agency] must limit carbon pollution from power plants," Schneiderman said in a statement announcing the lawsuit.

"Energy efficiency standards are vital to our public health, our environment and consumers. This is yet another example of how the Trump administration's polluter-first energy policy has real and harmful impacts on the public health, environment - and pocketbooks - of New Yorkers."

Trump has consistently claimed that current US climate change laws do not offer worthwhile environmental benefits and instead unnecesarily obstruct domestic energy production and job creation. 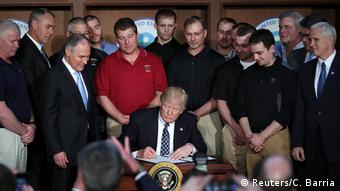 Since taking up his role, the current chief of the EPA, Scott Pruit, has publically denied the scientific consensus linking human activity to climate change. Pruitt is currently under investigation - by the Oklahoma Bar Association over an ethics complaint, and also internally by the EPA's science integrity office over his remarks that carbon dioxide is not the main contributor to climate change.

Under the plan, energy efficiency rules were originally expected to be published in the Federal Register and come into effect on March 20 this year. However, they have since been pushed back to September 30 by the DOE under Trump.

The latest executive order requires the EPA to "suspend, rescind, or revise" the regulation based on an assessment. The EPA consequently filed a legal motion with the US Court of Appeals for the District of Columbia Circuit to postpone continuing court proceedings in order for the review to take place.

The 17-state coalition has asked the court to disregard EPA's request, claiming "nothing the EPA has proposed to do obviates the need for this court's review."

Schneiderman's office said Trump's actions violate "both the federal Energy Policy and Conservation Act and Administrative Procedures Act" by preventing required energy efficiency standards for a range of consumer products, such as ceiling fans, by failing to publish them in the Federal Register.

The Trump administration's stance on clean energy and climate change has provoked strong criticism from a number of state organizations and activists.

In a statement, Earthjustice accused the federal government of "needlessly delaying a raft of commonsense energy-efficiency measures."

"It is past time for the DOE to take the simple action of publishing these completed rules so we can all start to reap the benefits," said Earthjustice attorney Timothy Ballo.

Schneiderman's office also wrote on Monday that newly-appointed DOE secretary Rick Perry has 60 days to publish energy efficiency rules in the Federal Register, or a second lawsuit will be filed.

The states' lawsuit is the latest of a series of legal actions over climate change in the US. A group of American youths has been moving forward with their lawsuit accusing the United States government of endangering them by failing to curb climate change.

Separately, the Conservation Law Foundation is suing Exxon Mobil, alleging "climate deceit" in a decades-long cover-up over the impacts of climate change, which they say is endangering communities.

Biden's climate policy: What does John Kerry's appointment mean for the environment? 25.11.2020