VP Murillo is the wife of President Daniel Ortega, who has overseen a deadly crackdown against political opponents. A Latin American expert told DW that sanctions don't equal US support for pro-democracy opposition. 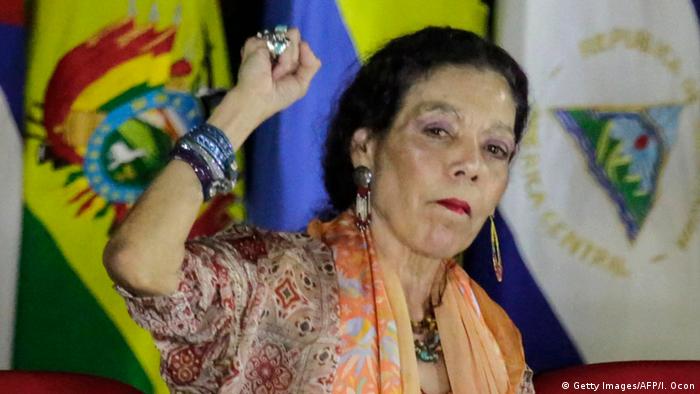 The US government announced Tuesday that it was placing sanctions on Rosario Murillo, the vice president of Nicaragua and also the wife of President Daniel Ortega, and a national security advisor in response to an ongoing crackdown by the Ortega government against its political opponents.

The sanctions were part of an executive order signed by US President Donald Trump that enables US Treasury officials to freeze property within US jurisdiction owned by Murillo and advisor Nestor Moncada Lau. It also bars banks and businesses from carrying out transactions with the individuals.

"Vice President Murillo and her political operators have systematically sought to dismantle democratic institutions and loot the wealth of Nicaragua to consolidate their grip on power," Treasury Secretary Steven Mnuchin said in a press statement.

"This Administration is committed to holding the Ortega regime accountable for the violent protests and widespread corruption that have led to the deaths of hundreds of innocent Nicaraguans and destroyed their economy."

After an exclusive interview with President Ortega in September, DW reporter Carolina Chimoy said that, "Rosario Murillo ... is actually the one who is running the government day by day. It is not the president. It is her."

Myrna Santiago, a professor of Latin American history at Saint Mary's College in California, told DW via email that she suspected the reason the US targeted Murillo "is to send her a message that she is not liked in Washington, just in case she is thinking about running for the presidency in 2021," when the next Nicaraguan elections are scheduled to take place.

Santiago doubted the concrete effect of the sanctions, however. "I am not sure what kinds of practical effects these sanctions will have, if any, but it is a signal of disapproval for the Nicaraguan government, a posturing against someone the US government considers an old foe" and would like to see out of power.

She also said that sanctions do not mean that the Trump administration supports the pro-democracy opposition groups opposed to Ortega.

"The United States government has never been in support of real democracy in Nicaragua — ever — and neither is it now," she said.

Since April standoffs between anti-Ortega protestors and police and armed groups have led to the deaths of more than 300 individuals, with more than 2,000 injured. Protestors have accused an increasingly authoritarian Ortega of organizing the violence, which has drawn international condemnation.

The protests began in response to proposed welfare changes but escalated into calls for democratic reforms in Nicaragua, including the resignation of Ortega and new elections.

Ortega, a former leftist Sandinista rebel, has been president since 2007. He previously ruled the Central American country from 1979 to 1990.

As protests against President Daniel Ortega enter their fourth month, the scars of the bloody government crackdown are as fresh as ever for students and doctors, priests and musicians. Sandra Weiss reports from Managua. (19.08.2018)

The crisis in Nicaragua is coming to a head. The Organization of American States and the European Union are increasing the pressure on Daniel Ortega's government. Will it work, or fizzle out, as it did in Venezuela? (19.07.2018)

Two days after the UN published a critical report on human rights in the Central American state, the delegation was given two hours to leave. They had called on the government to end harassment and intimidation. (31.08.2018)