After months of deadly anti-government protests, Nicaragua's embattled president denied any "persecution" has taken place. In an exclusive interview with DW, Daniel Ortega called the crisis a "coup" financed by the US. 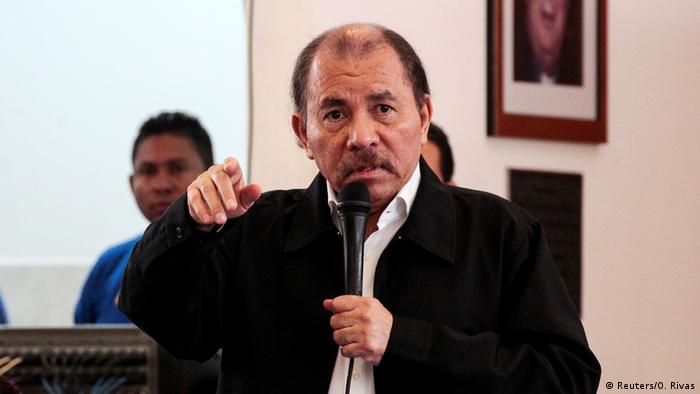 Nicaraguan President Daniel Ortega rejected reports that excessive force has been used against anti-government protesters in the country, in an exclusive interview with DW.

"There is no persecution in Nicaragua," Ortega told DW's Carolina Chimoy in the country's capital Managua.

He added that the crisis that has unfolded in the Central American country since mid-April is the result of an "attempted coup" by groups financially backed by the United States.

"Who are the coup-plotters? They are troops who are being supplied by the United States," he said.

"The best support that Germany can give us is to tell the United States that they shouldn't meddle in Nicaragua," Ortega added.

The UN estimates that 300 people have died and another 2,000 have been injured as a result of the government's violent repression of the opposition and student protests that started on April 18.

Attempts to have clergy in the Catholic Church mediate the crisis have failed, Ortega said, accusing the country's bishops of supporting anti-government demonstrators.

"We have bishops who have a real interest in securing peace in Nicaragua. There are others who are compromised," he said. Ortega added that the country's Bishops' Conference has been "contaminated as an institution" by the bishops who have voiced support for the protesters.

In July, Ortega slammed the clergy for siding with "coup-plotters" and "terrorists," prompting further protests in support of the bishops.

The Nicaraguan leader also said that despite the crisis, he won't be holding early elections in the country — which are slated to take place in 2021.

The country's bishops support bringing the elections forward to next year in order to defuse tensions.

In late August, a UN human rights report condemned Ortega's government for a violent crackdown on anti-government protesters that included illegal arrests, torture and closed trials. The UN human rights delegation was then immediately ordered to leave the country.

As the US takes over the rotating presidency of the Security Council, it has put the spotlight on Nicaragua. The change comes just days after a UN Human Rights delegation was expelled from the country. (05.09.2018)

Nicaragua's decision came amid international condemnation of President Daniel Ortega's reelection, with the US and the European Union pressing him to hold fresh elections.