US, Russian top diplomats to discuss Ukraine after NATO talks

The top diplomats from the US and Russia will meet after the NATO summit wraps up to discuss tensions in eastern Ukraine. Kyiv's foreign minister called for NATO to prepare sanctions on Moscow amid a troop build-up. 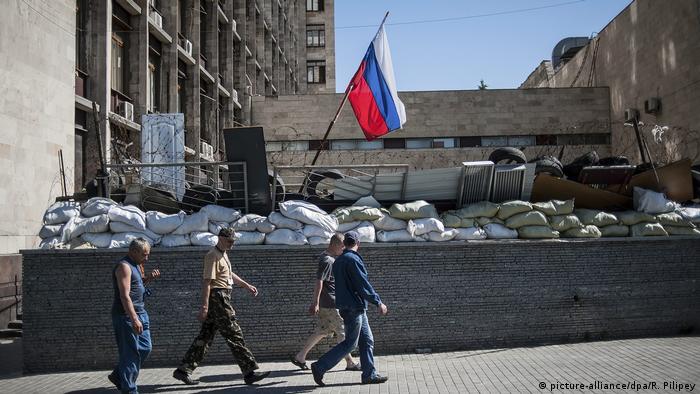 US Secretary of State Antony Blinken is set to meet Russian Foreign Minister Sergey Lavrov amid worsening tension between Russia and Ukraine, a senior US State Department official said Wednesday.

The plan for talks on Thursday in Stockholm comes as Ukrainian Foreign Minister Dmytro Kuleba joined the second day of meetings of NATO foreign ministers in the Latvian capital, Riga, Wednesday.

In an address to lawmakers, Ukrainian President Volodymyr Zelenskyy called again for direct talks to end the conflict.

"We must tell the truth that we will not be able to end the war without direct talks with Russia," he said.

In recent days, NATO has expressed concern as Russia massed troops on Ukraine's border, where Moscow kicked off what it says are large-scale military exercises at more than 30 training grounds in six different regions.  Russian President Vladimir Putin was dismissive of Zelenskyy's call for talks Wednesday.

Why is Ukraine at the NATO summit?

Kyiv is seeking greater cooperation with the alliance, and sanctions against Russia.

"We are confident that if we join efforts, if we act in a coordinated fashion, we will be able to deter President Putin and to demotivate him from choosing the worst-case scenario, which is a military operation," Kuleba said in advance of the meeting.

Ukraine has long hoped to join the alliance but has seen its efforts stall amid the conflict with Russia. And while NATO does not itself impose sanctions, its member states can.

The alliance is meeting in Riga over two days to discuss security issues confronting the 30-nation alliance. Foremost are concerns that Russia is building up troops on its border with Ukraine, and how the alliance might respond if the military build-up is the beginning of a larger advance into Ukrainian territory.

On Tuesday, NATO Secretary-General Jens Stoltenberg warned Russia would face a "high price" if it launches a military operation against Ukraine. Stoltenberg also took pains to say that as a non-member, the alliance's mutual defense pact does not extend to Ukraine.

In 2014, Russia annexed the Black Sea peninsula of Crimea from Ukraine and began backing secessionist militants in the country's east.

Since then, Ukraine has received increasing military support from NATO members.

Ahead of his meeting with Lavrov, Blinken warned Russia against any invasion of Ukraine.

Speaking after the NATO meeting, Blinken said that the United States was deeply concerned by evidence that Russia has made plans for significant aggressive moves against Ukraine.

He accused Russia of making plans involving large-scale military operations and the destabilizing of Ukraine from within.

He said the United States would respond with a range of "high impact" economic measures if Moscow were to invade.

"In recent weeks, Russia has stepped up planning for potential military action in Ukraine, including positioning tens of thousands of additional combat forces near the Ukrainian border," Blinken said.

"We've made it clear to the Kremlin that we will respond resolutely, including with a range of high impact economic measures that we have refrained from using in the past," he said.

He added that NATO members had a "tremendous solidarity" in willingness to pursue strong measures.

"Should Russia reject diplomacy and reinvade Ukraine, we will be prepared to act," he said.

Speaking in Moscow on Wednesday, Putin said Russia will seek "reliable and long-term security guarantees" from the Lavrov-Blinken meeting. "In a dialogue with the United States and its allies, we will insist on working out specific agreements that would exclude any further NATO moves eastward and the deployment of weapons systems that threaten us in close vicinity to Russian territory," Putin said.

He claimed that NATO was positioning military infrastructure closer to the Russian border, meaning "the threats are mounting on our western border."

"We aren't demanding any special conditions for ourselves and realize that any agreements must take interests of Russia and all Euro-Atlantic countries into account," Putin said. "A calm and stable situation must be ensured for all and is needed for all without exclusion."

Russia has sought to downplay its troop movements, which it says are within bounds as they are occurring within Russia's borders. Moscow has also reacted by blaming NATO for ratcheting up tensions.

On Wednesday, Russian foreign ministry spokeswoman Maria Zakharova told a press briefing in Moscow that Ukraine had deployed half of its military, or 125,000 troops, to the Donbas region of eastern Ukraine where Moscow has backed separatist fighters.

Kremlin spokesman Dmitry Peskov said Wednesday that Russia "cannot take any measures to de-escalate" tensions at this time due the alleged build-up of Ukrainian troops in Donbas.

At the same time, Putin said, "Look, they spoke about a possible Russian military intervention in Ukraine at the beginning of the year. But, as you see, this did not happen."